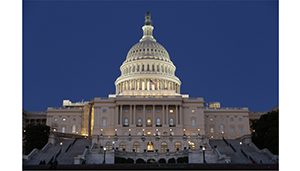 Political chaos means fewer opportunities for the medtech industry to get much done in Congress this year, says Clayton Hall, VP of government affairs for the Medical Device Manufacturers Assn.

When it comes to permanent repeal of the 2.3% medical device excise tax that was part of the 2010 Affordable Care Act, there are fewer legislative opportunities, Hall said during a webinar hosted Aug. 23 by Medmarc Insurance Group.

Mark Leahey, the MDMA’s president and CEO, said in a later statement: “We are confident that Congress will get the job done this year, and MDMA remains committed to working with policy makers to accomplish this bipartisan goal.”

Hall during the webinar listed a host of woes besetting President Donald Trump as he tries to get his agenda passed: the investigation into Russian interference in the 2016 presidential election, Trump’s controversial firing of FBI director James Comey, controversy over Trump not quickly condemning white supremacist protestors in Charlottesville, turnover among top Trump staffers, escalating tensions with Congress, and more.

Shaky relationships between Trump and some Republican senators are causing even more problems.

“These are real, serious, challenges to the president as he tries to move an agenda through the Senate,” Hall said.

Efforts to repeal and replace the Affordable Care Act appear dead for now as Congress moves on to tax reform – but that, too, could be a tough lift. Meanwhile, there are must-do actions that Congress must pass such as raising the debt ceiling and getting some kind of spending bill passed. (Trump in recent days threatened to let the government shut down if funding for a wall on the U.S.-Mexico border isn’t included.)

After the woes around ACA repeal-and-replace, Hall expects possible action on more discreet healthcare measures, including something to deal with the opioid abuse crisis and legislation related to “right-to-try,” lab-developed tests, cybersecurity and off-label promotion.

Said Hall” “I think what we’ll see when Congress gets back, they’ll spend much of September dealing with all these must-pass bills. And I think they will begin shifting in a very public way towards tax reform. … That’s gonna grow. They’re gonna go back in a more robust way, go back into their districts and across the base, sell something, put a package together. But again, I think the odds are long that they’re gonna be able to pass something this calendar year. The likeliest outcome is that they pass something the early part of next year.”