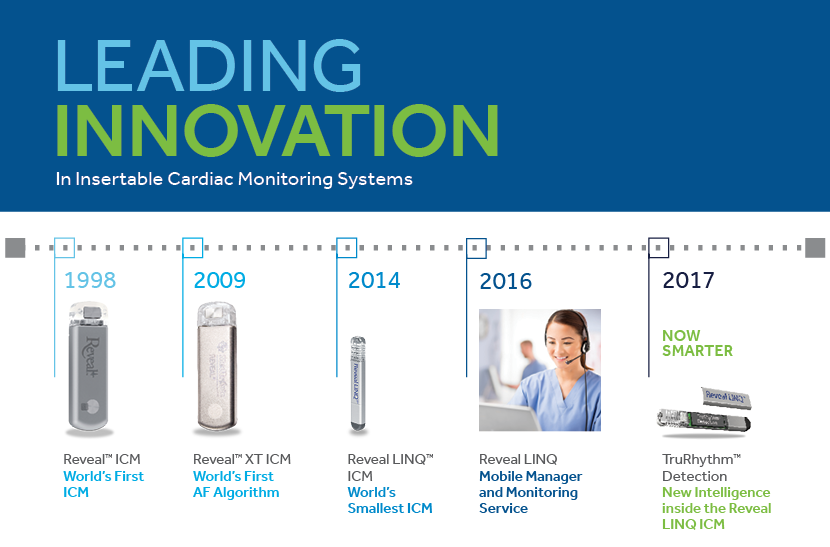 The device also features a self-learning atrial fibrillation (AF – an irregular and often very fast heart rate) algorithm, which learns and adapts to a patient’s heart rhythm over time.  AF episodes, which are most likely to trigger false positives with ICMs, experienced a 49 percent reduction in false detections with the Reveal LINQ ICM with TruRhythm Detection when compared to the Reveal LINQ ICM.[i]

Reveal LINQ ICM with TruRhythm Detection, which allows physicians to continuously and wirelessly monitor a patient’s heartbeat for up to three years, is approximately one-third the size of an AAA battery (~1 cc). It is placed just beneath the skin through a small incision of less than one centimeter in the upper left side of the chest, using a minimally invasive procedure, and its presence is often nearly undetectable to the naked eye once the incision has healed. The device communicates wirelessly with a patient bedside monitor that uploads device data to the Medtronic CareLink network; it is MR-Conditional, allowing patients to undergo magnetic resonance imaging (MRI), if needed.

“For nearly twenty years, Medtronic has led innovation in cardiac monitoring, including Reveal, the world’s first loop recorder, and Reveal LINQ, the world’s smallest ICM,” says Nina Goodheart, vice president and general manager of the Patient Monitoring and Diagnostics business at Medtronic. “We collaborated with hundreds of clinicians and analyzed more than 50,000 ECGs allowing us to pinpoint how we could redesign our algorithms to improve detection specificity, without compromising sensitivity.”

In collaboration with leading clinicians, researchers and scientists worldwide, Medtronic offers the broadest range of innovative medical technology for the interventional and surgical treatment of cardiovascular disease and cardiac arrhythmias. The company strives to offer products and services of the highest quality that deliver clinical and economic value to healthcare consumers and providers around the world.

Abbott imaging catheter recall flagged as Class I by FDA