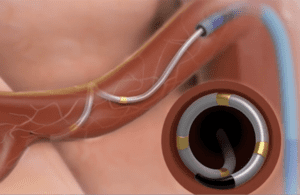 Medtronic’s clinical study of its Symplicity Spyral renal denervation system for hypertension is likely to go down to the wire for inclusion as a late-breaking clinical trial at the upcoming Transcatheter Cardiovascular Therapeutics (TCT) conference.

The highly anticipated results will offer new insight into the Fridley, Minnesota-based medical device manufacturer’s quest to build a billion-dollar business treating hypertension. CEO Geoff Martha recently reported “good progress” in those efforts, saying the trial “represents the final piece of a large body of evidence that we intend to submit to the FDA for approval.”

Medtronic (NYSE:MDT) said it still hopes to present results of its Spyral HTN-ON MED trial at the Cardiovascular Research Foundation’s TCT Conference in early November. But because trial investigators won’t know until late October whether the ON-MED primary endpoint has reached statistical significance, the study won’t be on the conference’s list of late-breaking clinical trials.

Medtronic “has been working with the Cardiovascular Research Foundation (CRF) to ensure that the ON MED data will be featured for presentation at TCT, if the primary endpoint reaches statistical significance.”

Trial enrollment will continue if the study has not yet reached the full, predefined sample size by then, Medtronic said.

Medtronic offered the latest Symplicity Spyral hypertension trial update in a filing with the Securities and Exchange Commission.

Renal denervation treatment for hypertension “continues to represent one of the largest untapped markets in medical technology, and one that Medtronic is on the cusp of pioneering, with little competition in sight,” Truist analysts David Rescott and Samuel Brodovsky wrote in a report Friday.

“Given the ON MED trial evaluates patients currently taking anti-hypertensive medications, which we see as a more clinically relevant population, we expect these results will be utilized to establish reimbursement and help shape the initial commercial rollout,” they said.

January will mark eight years since Medtronic announced that its major renal denervation clinical trial failed to meet its efficacy endpoint. But Medtronic learned from the experience and incorporated those lessons into its latest efforts, once again setting the stage for a potential breakthrough.