“We’re sitting at the tip of our chair waiting for the phone call that the product will be approved,” Medtronic EVP and EMEA President Rob ten Hoedt said Friday.

“The launch is going very, very well and it’s now waiting for the approval to come along,” he said.

Medtronic has requested initial European approval for gynecology and urology procedures (estimated by ten Hoedt as about 54 percent of the market), likely followed by requests for abdominal and colorectal procedures, approvals that would take another six to nine months. 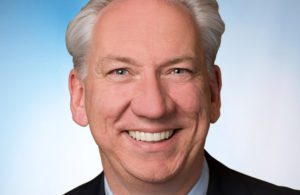 Medtronic is building teams for sales, service and education ahead of the initial approval and will start the Hugo rollout across Western Europe, where Medtronic has already signed customers “taking bets on us” ahead of securing the CE mark, he said.

Those early adopters in the first wave of customers include users of Intuitive Surgical’s Da Vinci robots that want to add one or two Hugo devices to their mix, but also new accounts with “very renowned users of robotics systems and key opinion leaders in the region,” ten Hoedt said.

Medtronic leaders have bet on Hugo as one of its leading opportunities to build new multibilllion-dollar businesses. They hope the Hugo system can increase sales across its other business units similar to the way Medtronic enters into partnership agreements with healthcare systems.

“The robot is actually putting that on steroids. … Our surgical sales organization in collaboration with our strategic accounts organization and the robotics team are working hand-in-hand to make sure that one opens the door for the other to come in and allow a large contract to be signed,” ten Hoedt said. “It is not just about selling a robot. It is about partnering with large hospital systems on the future of surgery. And the robot, in combination with strategic account management and the services we provide and our surgical products footprint, that combination should give us — has to give us — a unique position against the existing competitor of robots, but it should also allow us to make inroads into this market and start growing the number of surgical robotic surgical procedures from what it is today, 2% or 3%, to much larger numbers.”

Ten Hoedt made the remarks at the Bank of America Global Healthcare Conference, where he also warned of hospital worker burnout as a headwind for medical device makers.

Medtronic has not said how soon it plans to seek regulatory approval in the U.S. But in late August, Medical Surgical Portfolio President Bob White said Medtronic was setting up the U.S. EXPAND Uro pivotal trial that will treat U.S. patients with the Hugo system for the first time.