Medical implants can save lives by correcting structural defects in the heart and other organs. But until now, the use of medical implants in children has been complicated by the fact that fixed-size implants cannot expand in tune with a child’s natural growth.

To address this unmet surgical need, a team of researchers from Boston Children’s Hospital and Brigham and Women’s Hospital have developed a growth-accommodating implant designed for use in a cardiac surgical procedure called a valve annuloplasty, which repairs leaking mitral and tricuspid valves in the heart.

Currently, children who undergo life-saving cardiac surgeries, such as mitral and tricuspid valve repairs, may require several additional surgeries over the course of their childhood to re-repair or replace leaking heart valves. The novel growth-accommodating implant is meant to enhance the durability of pediatric heart valve repairs while also accommodating a child’s growth, decreasing the number of heart surgeries a child must endure.

Beyond cardiac repair, the research team says the tubular, expanding implant design used in their proof-of-concept — reported in Nature Biomedical Engineering — could also be adapted for a variety of other growth-accommodating implants throughout the body.

“Medical implants and devices are rarely designed with children in mind, and as a result, they almost never accommodate growth,” says Pedro del Nido, MD, co-senior author on the study, who is chief of cardiac surgery at Boston Children’s and the William E. Ladd Professor of Child Surgery at Harvard Medical School (HMS). “So, we’ve created an environment here where individuals with expertise and interest in medical devices can come together and collaborate towards developing materials for pediatric surgery.” 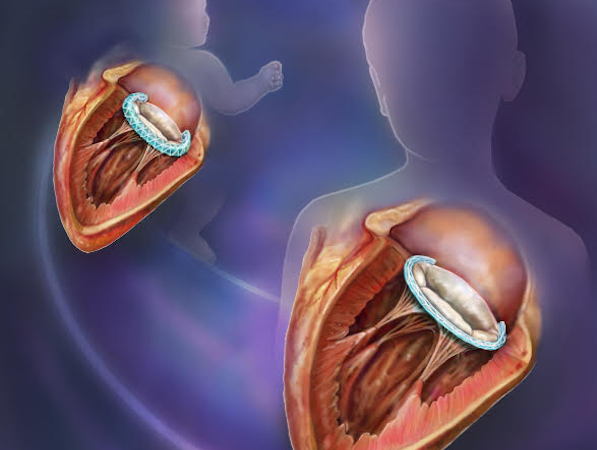 By partnering with Jeff Karp, PhD, a bioengineer and principal investigator at Brigham and Women’s Hospital (BWH) and an associate professor of medicine at HMS, his laboratory’s expertise in chemical engineering and biopolymer materials was brought into the mix for this research.

After vetting many different concepts for a growth-accommodating implant, the team took its inspiration from the braided, expanding design of a Chinese finger trap, selecting their first proof-of-concept to be a tricuspid valve annuloplasty ring implant.

“The implant design consists of two components: a degrading, biopolymer core and a braided, tubular sleeve that elongates over time in response to the tensile forces exerted by the surrounding growing tissue,” says Eric Feins, MD, co-first author on the paper, who was formerly a research fellow in del Nido’s lab and is currently a fellow in cardiothoracic surgery at Massachusetts General Hospital. “As the inner biopolymer degrades, the tubular sleeve becomes thinner and elongates in response to native tissue growth.”

To create the degrading core, Karp’s team recommended the use of an extra-stiff, biocompatible polymer that begins to erode on its surface following implantation. The polymer itself is made of components that already exist in the human body.

“By adjusting the polymer’s composition, we can tune the core to degrade predictably over a pre-determined amount of time,” says Karp, co-senior author on the study.

Based on the promising in vivo experimental data presented by del Nido and Karp’s team, the biomedical device company CryoLife Inc., is already developing their concept into a growth-accommodating annuloplasty ring implant for pediatric heart valve repair.

“In combination with the braided sleeve exterior, this two-part implant concept could have many medical applications beyond the most obvious ones to enhance cardiac valve surgery in children,” says del Nido.

The proprietary design of the braided sleeve developed by del Nido and Karp’s team doesn’t just share resemblance to a Chinese finger trap but also to an organic structure engineered by nature itself.

“We solved this problem of growth accommodation with a concept that already exists in nature: the octopus has a special ability to stretch its arms into confined cracks and spaces between rocks, in search of its prey,” says Yuhan Lee, PhD, co-first author on the study and a materials researcher at BWH. “It can do this because of unique, braid-like crossfibers of connective tissue that enable the simultaneous elongation and shrinking diameter of its arms, allowing it to extend its reach two to three times beyond the original arm length.”

This type of elongating movement is also found in natural tissue structure of the mammalian intestines and esophagus.

“This concept could be adapted for many different clinical applications, with exciting potential to be converted into an actively — rather than a passively — elongating structure that could act as a tissue scaffold encouraging growth,” says Feins.