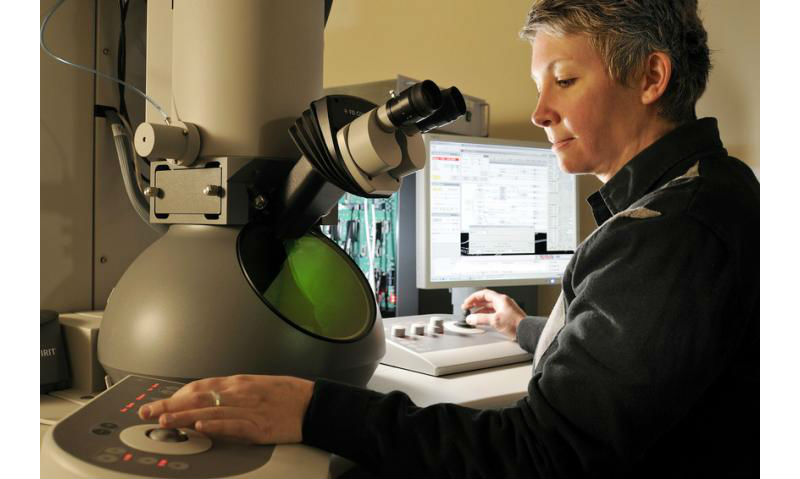 A photograph may reveal how something looks, but direct observation can divulge how the objects behave. The difference can mean life or death, especially when it comes to fighting human disease.

To help researchers examine exactly how human diseases work at the molecular level, Virginia Tech Carilion Research Institute scientist Deborah Kelly has developed a new set of tools to peer into the active world of cancer cells at unprecedented resolution.

Kelly and her team published the instructions in Scientific Reports, an open-access journal from the Nature publishing group.

“A single high-resolution snapshot of an isolated protein can only tell us so much, in health or disease,” said Kelly, who is also an assistant professor of biological sciences in Virginia Tech’s College of Science. “We can learn much more about how a protein works and how its function might be changed in response to a genetic mutation if we can see how it interacts with other molecules.”

Kelly and her team developed the new toolkit to examine, in detail, the BRCA1 protein and its associated parts in a near-native environment. The scientists collected the protein and the protein assemblies from the nuclear material of human breast cancer cells.

“This is the first demonstration of our technology, which lets us directly visualize macromolecular regulatory complexes in human patient-derived cancer cells,” Kelly said. “We chose initially to study the BRCA1 protein precisely because it accounts for about a quarter of genetic breast and ovarian cancers, and its function is still so poorly understood.”

In human cells, BRCA1 is a tumor-suppressing protein that helps repair damaged genetic material when cells grow and divide. BRCA1 helps proofreads the DNA templates and works to correct errors.

Mutations in BRCA1 disrupt normal cellular processes that regulate proper growth and division. The resulting misguided actions in cell growth due to mutated BRCA1 are heavily correlated with breast and ovarian cancers.

“The manner in which BRCA1 works in concert with other protein machinery is ill defined at the molecular level,” Kelly said. “And the three-dimensional structures of complexes containing BRCA1 are under-investigated, despite the potential important clinical significance.”

Scientists know that the BRCA1 protein can associate with other protein-binding partners to assist with genomic safeguarding.

“It’s critical to better understand these associations and how things go wrong in these highly regulated events, which ultimately play a major role in triggering the cancer process,” Kelly said.

Kelly and her team developed the microchip-based toolkit to examine the genetic material contained within the breast cancer cells.

Once the protein complexes were tethered in place, the researchers could image them using high-resolution cryo-electron microscopy and get a closer look at the nature of the protein interactions.

“Using innovative biophysical approaches to study active protein complexes, Dr. Kelly and her team have shed new light on how commonly found breast cancer-associated mutations in the BRCA1 gene impact its interaction with components of the transcriptional machinery,” said Amy H. Bouton, a University of Virginia professor of microbiology, immunology, and cancer biology, who was not involved in the research.

“This is an important step forward in understanding how common mutations in BRCA1 can impair critical cellular functions that can lead to breast cancer,” Bouton added. “Because this approach can be applied to numerous other protein complexes associated with normal and pathological states, the impact of this work will ultimately be felt well beyond the breast cancer field.”

Not only did the toolkit allow Kelly and her team to visualize BRCA1 from human-derived cancer cells, but it also allowed them to do it – from cracking open the cells to seeing the proteins – in about 95 minutes. That’s compared to the multiple days required by more traditional methods, which have a smaller success rate with limited visualization.

“Dr. Kelly and her team have made a key advance in molecular medicine by developing this new toolkit to investigate protein assemblies natively formed in the context of human diseases,” said Michael Friedlander, executive director of the Virginia Tech Carilion Research Institute. “This advance has the potential to open cancer research to a new level of investigation, with the possibility of providing new therapeutic targets and targeting strategies based on high-resolution, high-specificity molecular imaging.”