The MinION, a handheld DNA-sequencing device developed by Oxford Nanopore, has been tested and evaluated by an independent, international consortium coordinated by EMBL’s European Bioinformatics Institute (EMBL-EBI). The innovative device opens up new possibilities for using sequencing technology in the field, for example in tracking disease outbreaks, testing packaged food or the trafficking of protected species.

The MinION works by detecting individual DNA bases that pass through a nanopore, and unlike existing sequencing technologies, there are few inherent sensing limits on the length of the DNA sequence that it could read at one go. The MinION device was initially made available to thousands of laboratories all over the world, who were inspired to explore the technology and contribute to its development through the MinION Access Programme (MAP).

“The MinION Access Program was a brilliant thing to do. Because the device weighs only 100 grams, Oxford Nanopore could share it easily with more than 1,000 labs worldwide. Some of those people are tinkerers who invented new informatics tools or wet lab techniques that improved MinION performance,” says Mark Akeson of the University of California Santa Cruz, a co-inventor of nanopore sequencing, consultant to Oxford Nanopore, and a MAP participant. “The device performs well now, particularly for viral and bacterial genomes, so you can ship it anywhere and know you’re going to get the same result. We’re looking at a democratisation of sequencing in the not-so-distant future. That is changing things for people who need to solve critical problems in challenging environments, like tracking Ebola strains during the recent outbreak in West Africa. Another challenging environment is space – the MinION will be the first DNA sequencer tested in space, by NASA on the International Space Station.” 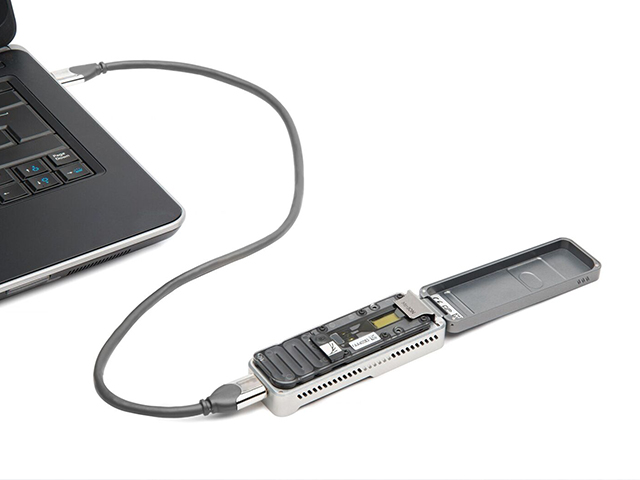 “In a few years’ time, people who may be several steps removed from basic genomic research, like teachers in a classroom, could be using this device to teach science in new, exciting ways that have never been possible before,” adds first author Camilla Ip, of Oxford University. “I’m using the MinION in a project with secondary-school students in Oxford because this technology will probably be so much a part of daily life in a few years’ time that they take it for granted. The kids who are about to go to university and join the workforce are the ones who will be creating new smartphone apps that use this sensing device for applications we haven’t yet imagined.”

Five laboratories in the UK, the US, Canada and The Netherlands conducted two sets of ten experiments, for the same E. coli isolate (strain K-12 sub-strain MG1655), using a single, shared protocol. The accuracy and reproducibility of the data were consistent between labs and of good quality. However, there is much work to be done in molecule delivery to flow cells, software protocol clarity and other areas.

The data generated in the study published today represents a snapshot of the MinION’s performance in April 2015. Since then, innovation on the MinION has outpaced analysis, with new chips and kits released every 3-6 months. The paper, which includes details of the protocol used and preliminary analysis of the data generated, is available in the Nanopore analysis channel on F1000Research. The data are hosted in the European Nucleotide Archive (ENA).

“Oxford Nanopore has excited the world with the promise of a technology that can be truly disruptive,” says David Buck of Oxford University. “When the MinION Access Programme opened it seemed like the largest virtual R&D group ever established in genomics – now the MAP is open to anyone. Working with the MARC team from the start of the MAP has been exciting – we’ve had the chance to push the technology and gain some traction on understanding what is going on under the hood. We’ve published the paper in F1000Research before peer review as a baseline for the community, so that everyone can look at the paper and data, go on to do their own analyses share their results and stimulate discussion.”

“Nanopore sequencing will open the door for the development of novel tools and applications to analyse the influx of new data,” says Rebecca Lawrence, Managing Director of F1000Research. “The Nanopore analysis channel on F1000Research will be a central, open platform on which scientists can publish and discuss new applications and analyse workflows for nanopore sequencing data. People can access and contribute data easily, so that the wider life-science community can realise the full potential of this new technology quickly.”

EMBL-EBI has been coordinating the data distribution and analysis for MARC, using the ENA to handle the raw data. “This new device enables fully mobile sequencing with real-time data streaming, which means that with a high-speed Internet connection, the first dataset could arrive 20 minutes after the DNA is loaded,” says Guy Cochrane, who leads the ENA at EMBL-EBI. “The ENA is a public resource that extends the reach and usefulness of sequencing, and with new technologies like this we provide the space, flexibility and expertise needed to test it and get it into shape. We were delighted to use it as the platform for data management and sharing in MAP, so we can place the results in the public domain swiftly.”

The next phase of analysis is already underway by the consortium, which is exploring ways to reduce the error rate and pushing to see how small the sample and how long the reads can be.