Researchers have spent decades trying to replace the insulin-producing pancreatic cells, called beta cells, that are lost in diabetes. Now a team of researchers, reporting Feb. 18, 2016 in Cell Stem Cell, have discovered that tissue from the lower stomach has the greatest potential to be reprogrammed into a beta-cell state. The researchers took samples of this tissue from mice and grew them into “mini-organs” that produced insulin when transplanted back into the animals. The mini-organs’ stem cells also continued to replenish the insulin-producing cell population, giving the tissue a sustainable regenerative boost. 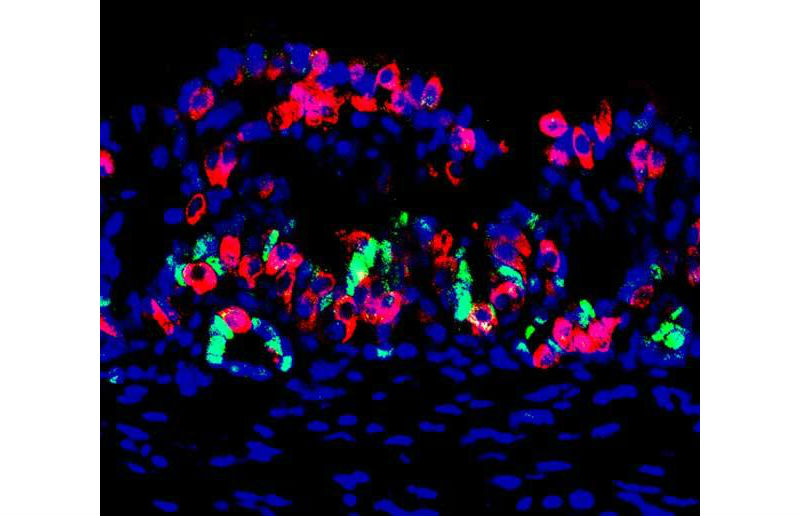 A section of the gastric mini-organ engineered to produce insulin-secreting cells, with immunofluorescent staining. This image shows many induced insulin-producing cells (red) present in the mini-organ. Gastric stem and progenitor cells (green) are detected at the base of the glands. Cell nuclei labeled in blue. (Credit: Chaiyaboot Ariyachet)

To find the body tissue most amenable to reprogramming for insulin production, the researchers genetically engineered mice to express three genes that can turn other cell types into beta cells. “We looked all over, from the nose to the tail of the mouse,” says senior author Qiao Zhou, of the Harvard University Department of Stem Cell and Regenerative Biology. “We discovered, surprisingly, that some of the cells in the pylorus region of the stomach are most amenable to conversion to beta cells. This tissue appears to be the best starting material.”

The pylorus region connects the stomach to the small intestine. When reprogrammed, cells in this area were the most responsive to high glucose levels, producing insulin to normalize the mouse’s blood sugar. To test the cells’ effectiveness, the researchers destroyed the mice’s pancreatic beta cells, forcing their bodies to rely only on the altered stomach cells. Control animals, without tissue reprogramming, died within eight weeks. But the experimental mice’s reprogrammed cells maintained insulin and glucose levels in their blood for as long as the animals were tracked, up to six months.

The pyloric stomach has another advantage: stem cells naturally renew the gut tissue on a regular basis. When cells in the pyloric stomach expressed the conversion genes, and the first set of reprogrammed cells were experimentally destroyed, the region’s stem cells refreshed the insulin-producing cell population. “In various disease states, you have a constant loss of beta cells,” Zhou says. “We provide, in principle, an advantage to replenish those.”

But to get closer to a potential therapy, Zhou and his colleagues had to take a different approach. “When the mouse grew into an adult, we turned on the three genes. But in terms of a clinical future, you can’t do a transgenic human being,” he says. So the researchers took stomach tissue from the mice, engineered it to express the beta-cell reprogramming factors in the lab, and coaxed the cells to grow into a tiny ball of a mini-stomach that would both produce insulin and refresh itself with stem cells. The team then placed these mini-organs in the membrane that covers the inside of the mouse’s abdominal cavity.

When the research team destroyed the mice’s pancreatic cells to see if the mini-organs would compensate, they found that glucose levels stayed normal in five of the 22 experimental animals, which was the team’s expected success rate. “When you put this together, you are basically asking the harvested stem cells to self-organize into an organ on a matrix,” Zhou says. “The limitation is all about whether the tissue you transplanted can successfully reorganize with the right layers.”

The insulin-producing potential of the pyloric stomach cells likely comes from their natural similarity to pancreatic beta cells. The researchers found that many genes critical for beta cell function are also normally expressed in the pylorus’s hormone-producing cells. “What is potentially really great about this approach is that one can biopsy from an individual person, grow the cells in vitro and reprogram them to beta cells, and then transplant them to create a patient-specific therapy,” Zhou says. “That’s what we’re working on now. We’re very excited.”