MMI’s instruments are equipped with the smallest articulated wrist having a 3-millimeter outer diameter and tips just 150 micron in width. The wrist is the key to performing robotic microsurgery in real clinical settings and allows easy manipulation of small sutures, from 9-0 to 12-0 in size.

“Thanks to the use of advanced materials and novel microfabrication processes, we have designed the smallest articulated wrist to provide microsurgeons unique instrument dexterity and robotic precision,” says Massimiliano Simi, Co-founder and VP R&D. 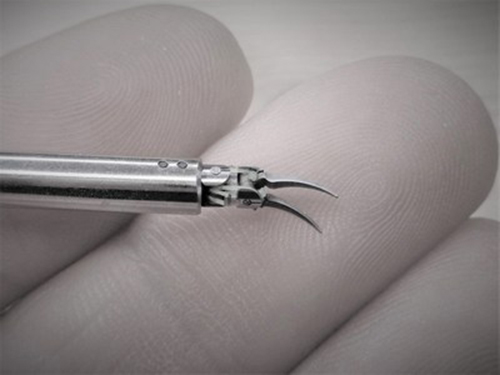 “We have developed this groundbreaking technology together with microsurgeons from the product’s conception and the positive feedback and response that we’ve received along the way has really been overwhelming and led us to believe that we are on the right track in developing a robot by and for microsurgeons,” says Hannah Teichmann, Co-founder and VP Clinical.

“In my opinion, the MMI robotic platform will push the frontier of microsurgery forward and beyond the capabilities of the human hand, thus allowing more surgeons to perform more complex procedures but also enabling supermicrosurgery, such as lymph reconstruction, for the more expert ones,” says Innocenti.