Breakfast, lunch and dinner? For too many of us, the three meals of the day go more like: morning meeting pastry, mid-afternoon energy drink and midnight pizza. In Cell Metabolism on September 24, Salk Institute scientists present daily food and beverage intake data collected from over 150 participants of a mobile research app over three weeks. They show that a majority of people eat for 15 hours or longer, with less than a quarter of the day’s calories being consumed before noon and over a third consumed after 6 p.m.

The purpose of the app is to pilot a way to objectively study the effects of timing food intake in humans. Primed with evidence of how long people eat each day, senior author Satchidananda Panda–an associate professor in the Salk Institute’s Regulatory Biology Laboratory–along with first author Shubhroz Gill were able to test whether reducing this daily duration impacts health. In addition to cutting out some bad habits, the authors hypothesized that a timed feeding schedule could prevent “metabolic jetlag”–when differences in day-to-day or weekday/weekend meal times cause metabolic organs to become out of sync with the body’s overall circadian rhythms.

Past experiments in mice from Panda’s lab have shown that changing eating duration could protect against obesity and disease. “Our research on the benefits of time-restricted feeding in mice elicited mixed feedback; while several people thought humans do eat randomly and the approach might have translational significance, others said that we largely eat three meals every day within a 10—12 hour interval,” Panda says.

“Surprisingly, we were unable to find a convincing publication that investigated when people eat,” he adds. “Most nutrition surveys elicit responses to questions about breakfast, lunch, dinner and snacks, but there is very little effort on an unbiased evidence-driven approach.”

Gill and Panda’s next step was to design a mobile app that could be used to collect, analyze and interpret patterns of food intake in humans. They kept the app simple, only requiring users to send pictures of everything they ate or drank, whether it was an entire water bottle or a few bites of a cookie. Each click also captured metadata (such as the location where food was consumed) and recorded a timestamp. Food data were not stored in the app, and reminders were sent about once a day to sustain compliance. 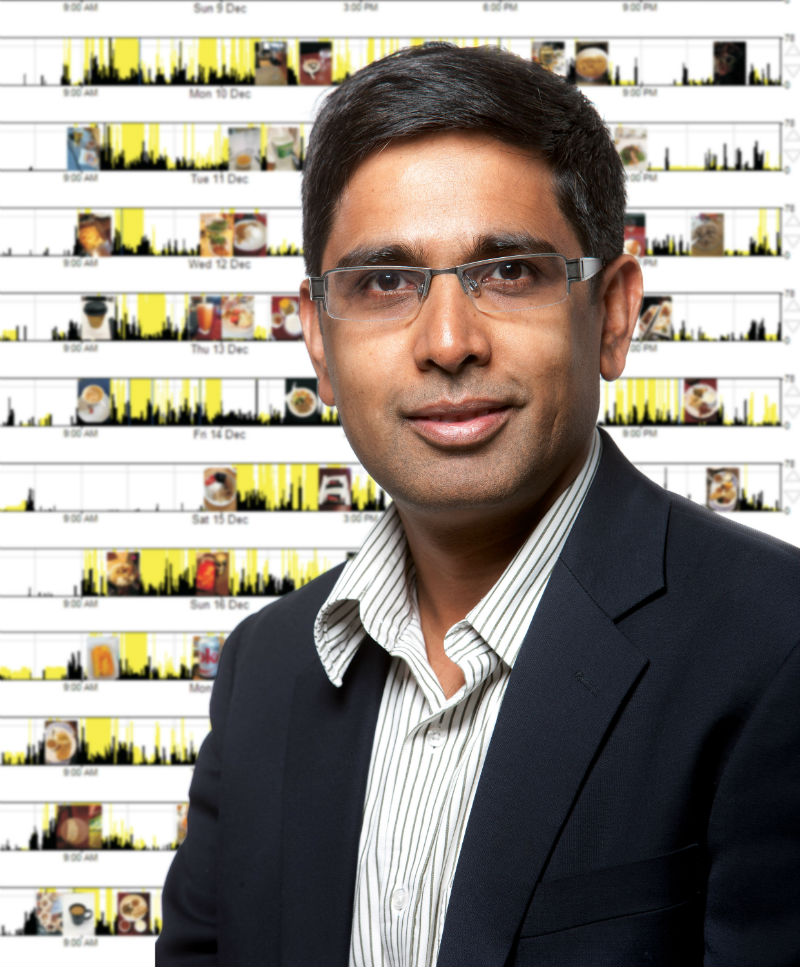 Volunteers for the study were recruited through online and print ads around the San Diego area. While the app was free to download, it could only be used by individuals who came into the lab to sign an informed consent form. Users were healthy males and females between the ages of 21 and 55 who were not actively managing their diet and who did not go through any weight loss program in the past six months.

“One pleasant surprise was how many participants got used to taking a picture of anything they ate or drank; it almost became their second nature,” says Gill, a graduate student and subsequently postdoctoral associate in Panda’s group. “The context of the pictures spoke volumes–for example, when taken next to a keyboard, in bed, watching TV, on the sidewalk, in the car or while filling gas. This is an example of a new class of research studies that have become possible due to the massive adoption of smartphones.”

He notes that the app could be a powerful tool for personalized medicine. For example, the pictures revealed that nearly two-thirds of participants took some kind of nutritional supplement or vitamins, but the time at which they took these pills varied from day to day. The same held true for medication. 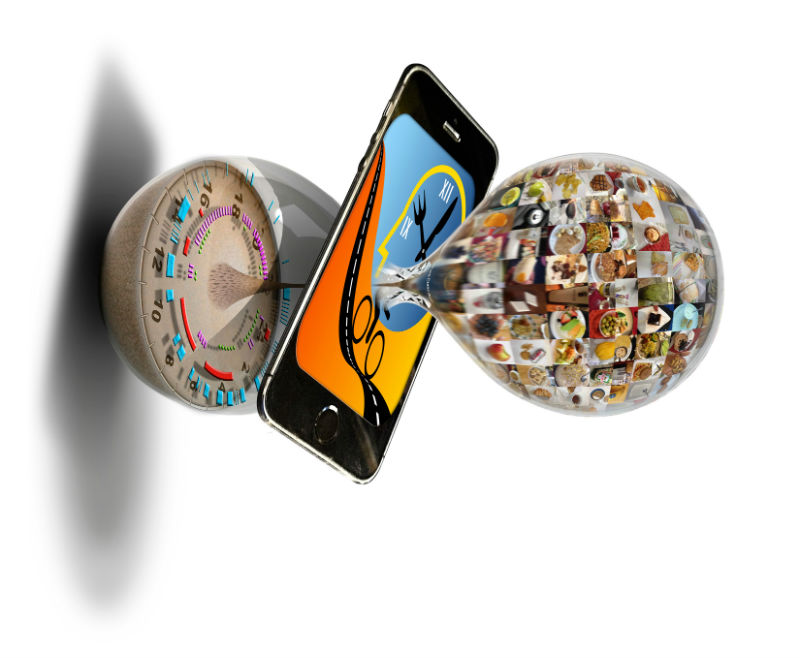 The purpose of the app is to pilot a way to objectively study the effects of timing food intake in humans.

In addition, the data revealed cultural food practices, such as Americans’ consumption of coffee and milk in the morning, alcohol in the evening, and tea throughout the day. In addition, yogurt was a morning food, sandwiches and burgers were primarily reserved for lunchtime, while vegetables and ice cream were saved for the evening. Photos of chocolate and candy were recorded from pretty much 10 a.m. onward. Larger studies that collect data from patients, shift workers, and different socioeconomic groups will be necessary to offer a more complete picture and to study socio-economic variations.

The researchers also tested whether the app could assist people who wished to adapt to time-restricted feeding, i.e., eat for fewer and consistent hours every day. Eight overweight individuals who used to eat for more than 14 hours every day were selected to eat for a 10—11 hour period each day without any recommendation for altering their normal diet. After 16 weeks, assisted by a weekly “feedogram” showing their dietary intake patterns, each lost an average of 3.5% of their excess body weight and reported feeling more energetic and having slept better.

“The study is about developing methods and offers some preliminary insight into what and when people eat,” Panda says. “One should not take away the message that changing the eating duration is the only method to improve health. This may also be risky for individuals with undiagnosed fasting hypoglycemia.”

The smartphone app is available for anyone willing to contribute his/her data to a Salk Institute IRB-approved study. Visit http://mycircadianclock.mycircadianclock.org/ and then download the app “myCircadianclock” from the iOS App Store or Google Play. The app will help record intake of food, water, beverages, and supplements and, after two weeks, reveal the user’s own “feedogram.”

With enough subjects, Panda next hopes to test the benefits of time-restricted feeding under different conditions of sleep, activity, and disease.