Rice University students and their mentors have created a sterilization station for surgical instruments that can help minimize risk of infections to patients anywhere in the world.

The station built into a standard 20-foot steel shipping container houses all the equipment necessary to prepare surgical instruments for safe reuse, including a water system for decontamination and a solar-powered autoclave for steam sterilization. Autoclaves are standard in modern hospitals but badly needed in low-resource settings.

After months of design and construction, Douglas Schuler, an associate professor of business and public policy in Rice’s Jones Graduate School of Business, and his team published an article in the open-access journal PLoS ONE detailing trials to validate what they call the Sterile Box.

They reported the system’s performance was nearly perfect over 61 trials in 2015 to sterilize and prepare a set of instruments for return to the operating room.

The researchers cited studies that show about a third of patients in low-resource settings suffer surgical-site infections, a number nine times higher than in developed countries. These infections are frequently the result of care providers using medical instruments that carry traces of microorganisms or biological material from previous patients. 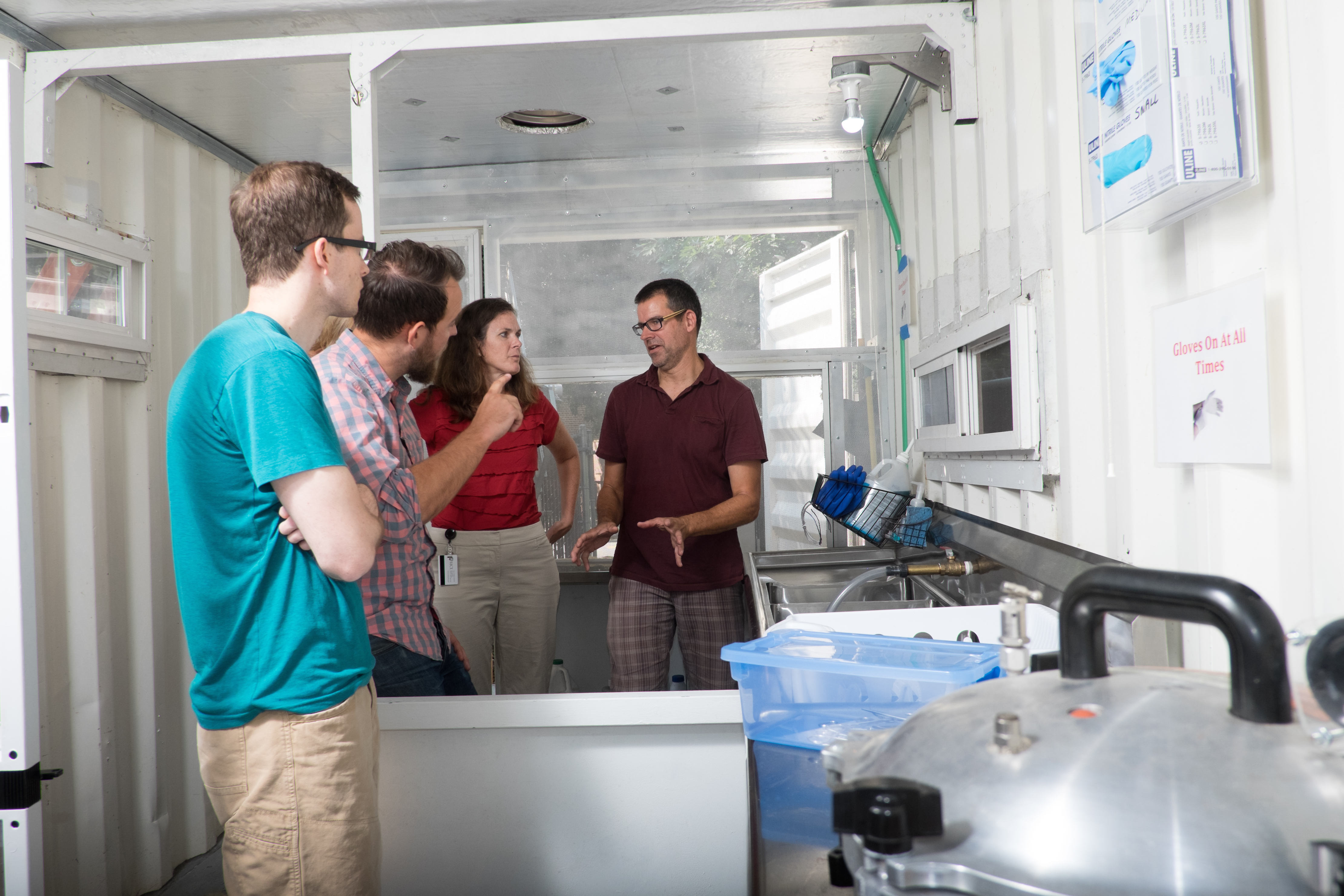 Rice University professors Maria Oden, second from right, and Douglas Schuler, right, give visitors a tour of the Sterile Box prototype. The unit was designed to sterilize and process surgical instruments in low-resource settings. (All images credit: Jeff Fitlow/Rice University)

Surgical-site infections can lengthen hospital stays and even lead to death, the researchers wrote.

Schuler and his students have been working to sterilize instruments with sunlight for years. Their first design used a mobile A-frame solar-thermal device, the Capteur Soleil, that focused sunlight to heat a stand-alone autoclave. But the team decided to design a more comprehensive platform in which instruments could be processed day and night.

Rice Professor Maria Oden, director of the university’s Oshman Engineering Design Kitchen and a co-author of the article, said rural areas and small cities in developing countries often have medical facilities with improperly maintained or malfunctioning sterilization equipment or no equipment at all. Unreliable power and inadequate quality control over sterilization are also issues, she said. 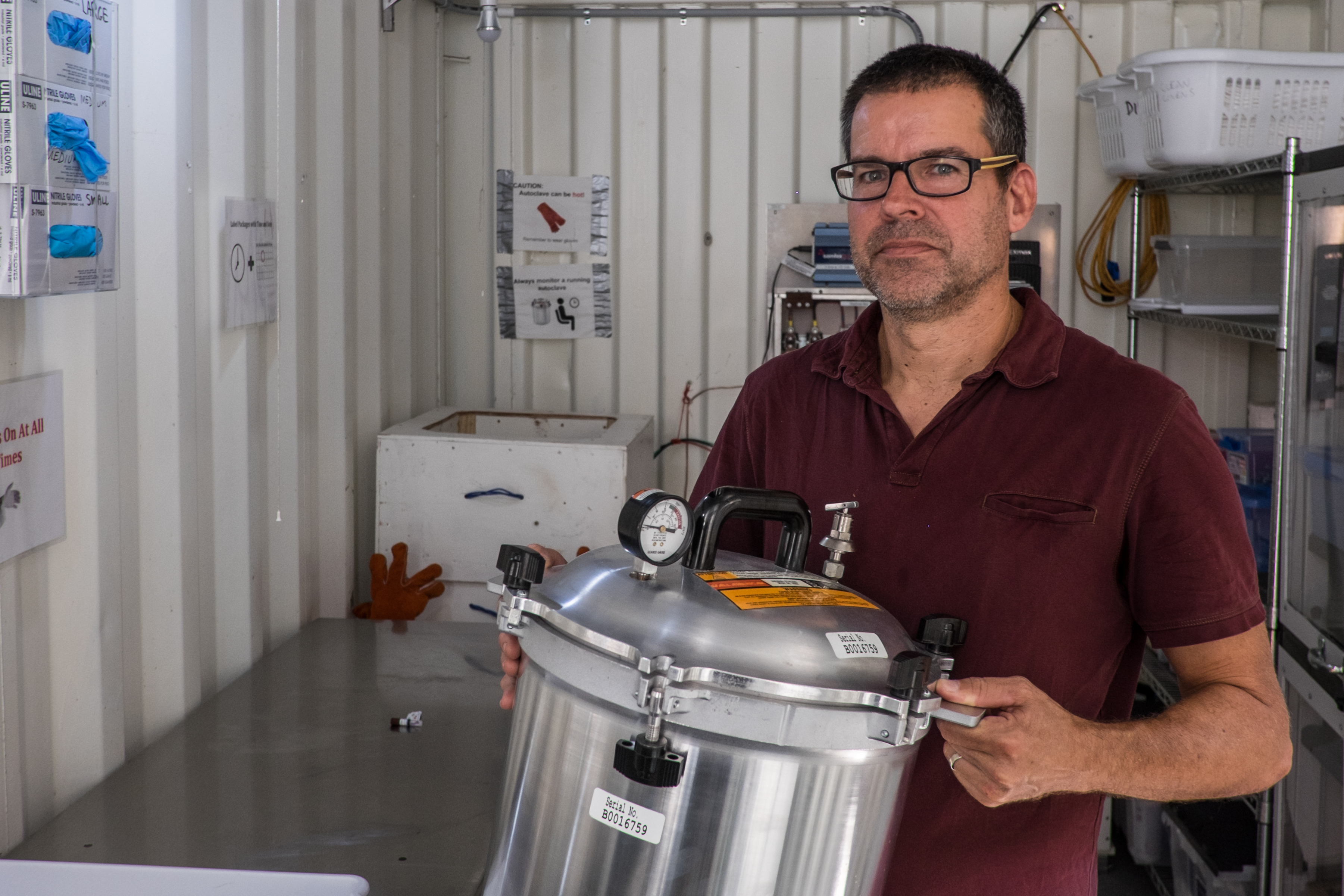 Rice University Professor Douglas Schuler holds a steam-activated autoclave used to sterilize surgical instruments in the Sterile Box developed at Rice for use in low-resource settings.

“Infection control in the surgical suite really is a big challenge in the developing world,” said Oden, who has seen the challenges firsthand while traveling as part of the Rice 360˚: Institute for Global Health. “I was shocked to learn how many surgeries end up with patients developing some manner of infection.”

She said the fact that the Sterile Box is a complete drop-in system is significant.

“The box looks at the problem from a complete system level and makes it easy to implement,” she said. “It’s not just a simple device to clean and sterilize the tools, but a way to manage the process.”

“We tried to really think hard about social context,” Schuler said. “We laid out the elements to minimize human error and water and energy requirements to the extent that we can. I really like that about our design.”

The Rice team added solar panels and electrical storage to the container, as well as water distribution from two tanks, one on the ground that has a hand pump to move water to a 50-gallon tank on the roof. The interior has two rooms: a foyer that separates the sterile processing area from outsiders and the elements and a main area with a small window to pass instruments in and out. 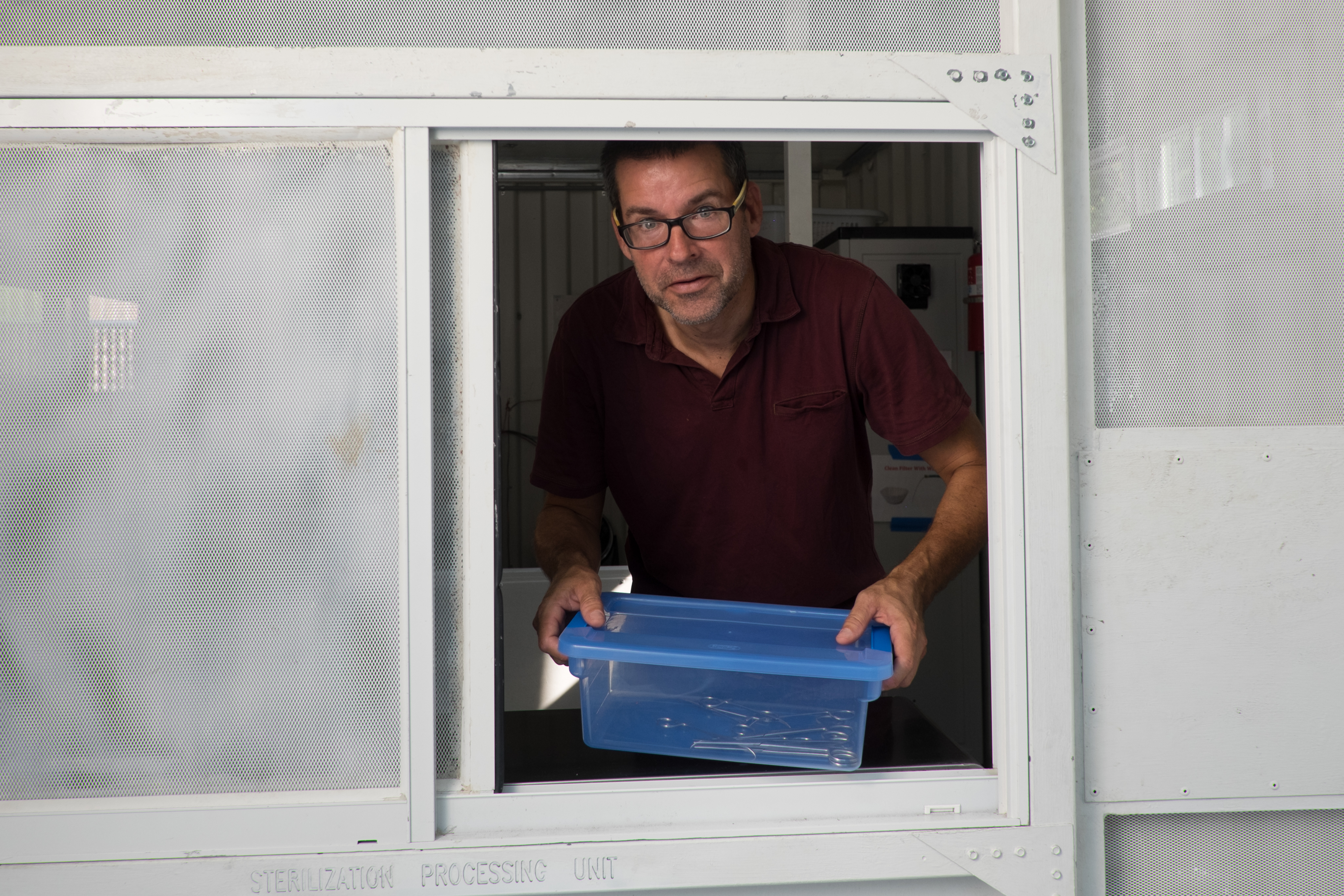 Rice University Professor Douglas Schuler and a team of students developed the Sterile Box, a shipping container converted into a self-contained, solar-powered station to sterilize and process surgical instruments for use in low-resource settings.

Processing is divided into four stations. At the first station technicians decontaminate instruments in a three-basin sink, removing debris and then soaking them in an enzymatic detergent and scrubbing with nylon brushes before a final rinse. At the second station an electric hotplate heats the steam autoclave that sterilizes the instruments. At the third the instruments are dried on wire racks and then moved to the fourth, a storage cabinet where they await the next surgery.

To keep technicians comfortable, the team incorporated radiant barrier insulation and reflective paint outside and maximized air flow inside with mesh screens over the door and windows, floor vents and two wind-powered turbine fans in the ceiling. A battery pack tied to the solar panels powers outlets for fans and cellphone charging.

The next step will be to test the Sterile Box in a clinical setting. Schuler is working with Dr. Sharmila Anandasabapathy, director of Baylor Global Initiatives at Baylor College of Medicine, to incorporate the box into the planned deployment of its Smart Pod, a mobile surgical suite also to be housed in a modified shipping container. Baylor expects to test its unit near the Malawi capital of Lilongwe in 2017.

Schuler said the Sterile Box may be suitable for other medical situations, including maternal and neonatal care, oral health care and postdisaster relief.