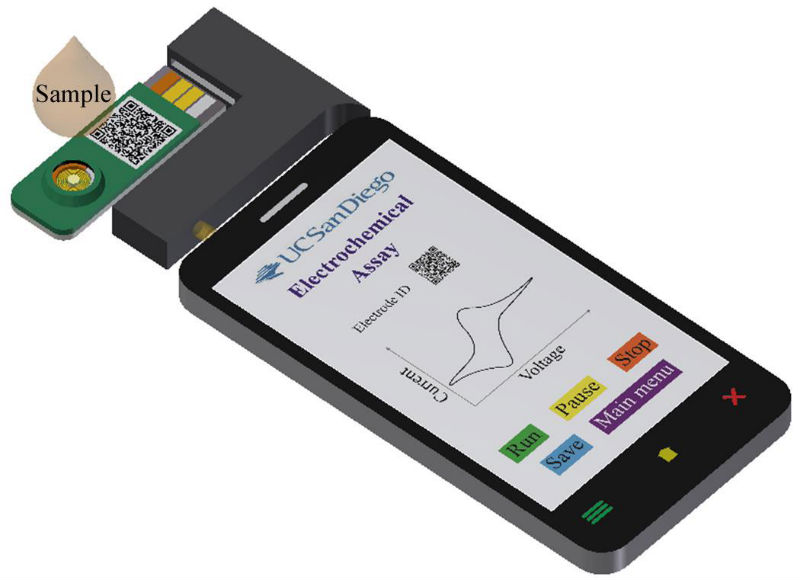 Hall’s group is also developing a modular biomolecular sensor that will be integrated into the Ara modular phone.

Mobile technology adoption in the healthcare ecosystem has been growing exponentially in recent years. From mobile applications to wearable devices, the healthcare community is fundamentally changing. Researchers at the University of California, San Diego aim to leverage technology that already exists within the wireless ecosystem to deepen the remote doctor-patient interaction.

The current generation of wearable devices typically only measure steps and heartrate, which provides limited actionable data for doctors who are used to measuring the biomolecular constituents of samples, such as blood or urine. “How can we make a mobile phone the first line of defense in our healthcare?” Drew Hall, a professor in the Department of Electrical and Computer Engineering at the UC San Diego Jacobs School of Engineering, aims to answer that question and it starts with how to test biological samples with your smartphone.

Diagnostics at Home
The first challenge Hall’s group faced was finding a universal way to tap into the phone to reuse the existing hardware, such as the screen, battery, processor, and wireless radios. Because all phones are different and have various types of ports for power and communication, they settled on the one port that is ubiquitous among all phones – the audio jack. The group has demonstrated the ability to harvest power from the phone (~10 mW) and also establish a bidirectional communication with the phone through the audio jack.

In their testing, they found that variations among phone manufactures resulted in vastly different available power and output impedances. To overcome this, they designed a tunable impedance matching network to maximize the power harvesting efficiency. From there, they added biosensors to measure the biological samples. The one-time-use tests resemble common at-home pregnancy sticks, except instead of colored lines, the smartphone quantitatively reads out the result where it can be processed, stored, and wirelessly transmitted to a healthcare professional.

pH Sensor
In collaboration with Dr. Doug Conrad, Director of the UCSD Adult Cystic Fibrosis Clinic, Hall and his group developed a mobile phone pH biosensor that enables cystic fibrosis (CF) patients to track their lung health at home. Currently, these patients have no way of tracking their health outside of a hospital setting. Hall and Conrad hypothesize that the ability to longitudinally monitor pH will allow physicians to be proactive rather than reactive in treatment. There are currently three patients in the greater San Diego area piloting this technology.

Google Ara
Will biomolecular sensing become commonplace on the phone just as a camera is now? Hall’s group is also developing a modular biomolecular sensor that will be integrated into the Ara modular phone. Project Ara, from Google’s Advanced Technology & Projects (ATAP) group, is a mix-and-match smartphone where owners can buy and replace parts individually instead of needing to buy an entirely new phone every two or three years.

With wireless infrastructure already in place globally, the hope is to identify, treat, and manage disease in every country with the aid of the at-home clinic, by way of the smartphone.