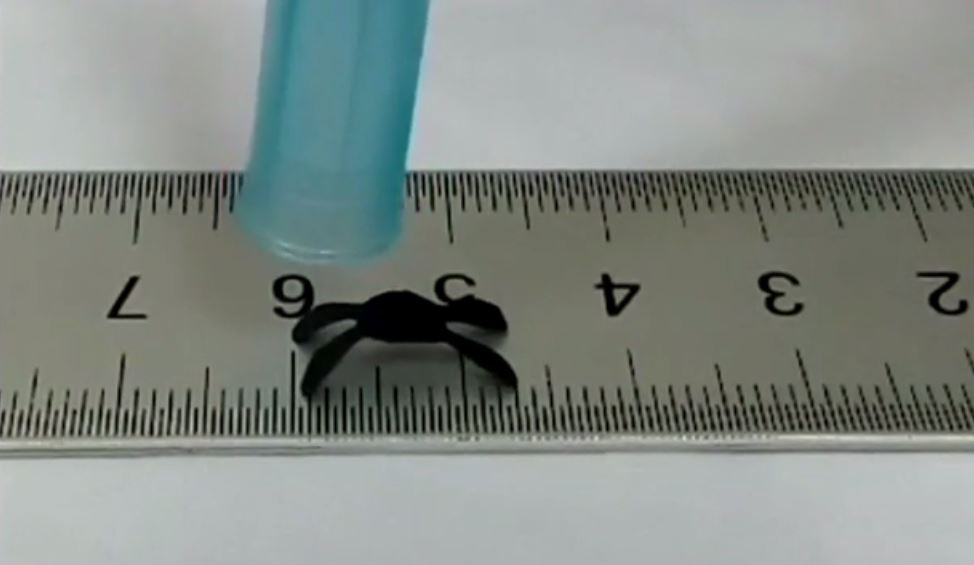 The researchers used flash-treated graphene oxide to create a crawler that moved when humidity was increased. Switching the humidity off and on several times induced the crawler to move 3.5 millimeters in 12 seconds, with no external energy supply. (Credit: Yong-Lai Zhang of Jilin University)

Using an off-the-shelf camera flash, researchers turned an ordinary sheet of graphene oxide into a material that bends when exposed to moisture. They then used this material to make a spider-like crawler and claw robot that move in response to changing humidity without the need for any external power.

“The development of smart materials such as moisture-responsive graphene oxide is of great importance to automation and robotics,” says Yong-Lai Zhang of Jilin University, China, and leader of the research team. “Our very simple method for making typical graphene oxides smart is also extremely efficient. A sheet can be prepared within one second.”

In the journal Optical Materials Express, from The Optical Society (OSA), the researchers reported that graphene oxide sheets treated with brief exposure to bright light in the form of a camera flash exhibited reversible bending at angles from zero to 85 degrees in response to switching the relative humidity between 33 and 86 percent. They also demonstrated that their method is repeatable and the simple robots they created have good stability.

Although other materials can change shape in response to moisture, the researchers experimented with graphene-based materials because they are incredibly thin and have unique properties such as flexibility, conductivity, mechanical strength and biocompatibility. These properties make graphene ideal for broad applications in various fields. For example, the material’s excellent biocompatibility could allow moisture-responsive graphene oxide to be used in organ-on-a-chip systems that simulate the mechanics and physiological response of entire organs and are used for drug discovery and other biomedical research.

Other groups have shown that graphene oxide can be made moisture responsive through a chemical reaction called reduction, which removes oxygen from molecules. In fact, the researchers previously demonstrated that both sunlight and UV light can induce the effect. However, these approaches were hard to precisely control and not very efficient.

The research team experimented with using a camera flash, which typically covers a broad spectral range, as a simple and effective way to create moisture-responsive graphene. A camera flash allowed the researchers to remove oxygen from, or reduce, just one side of a sheet of graphene oxide. When moisture is present, the reduced side of the graphene oxide absorbs fewer water molecules, causing the non-reduced side to expand and the sheet to bend toward the reduced side. If the material is then exposed to dry air, it flattens out.

The researchers found that keeping the flash about 20 to 30 centimeters away from the graphene oxide sheet was enough to selectively modify the top layer of the sheet without penetrating all the way through to the other side. The sheet also needs to be more than 5 microns thick to prevent it from being completely reduced by the flash exposure.

To make a moisture-driven crawler, the researchers cut flash-treated graphene oxide into an insect shape with four legs. The free-standing crawler was about one centimeter wide and moved forward when humidity was increased. Switching the humidity off and on several times induced the crawler to move three and a half millimeters in 12 seconds, with no external energy supply.

The researchers also made a claw shape by sticking together eight 5-by-1 millimeter ribbons of flash-treated graphene oxide in a star shape. When moisture was present, the claw closed within 12 seconds. It returned back to an open position after 56 seconds of exposure to dry air.

“These robots are simple and can be flexibly manipulated by changing the environmental humidity,” says Zhang. “These designs are very important because moving and capturing/releasing are basic functions of automated systems.”

Zhang added that integrating moisture-responsive graphene into a microchannel system connected to humidity controller could allow even more precise control and other types of robots or simple machines. The researchers are now working on ways to improve the control of the material’s bending and are experimenting with ways to gain more complex performance from robots made of moisture-responsive graphene oxide.