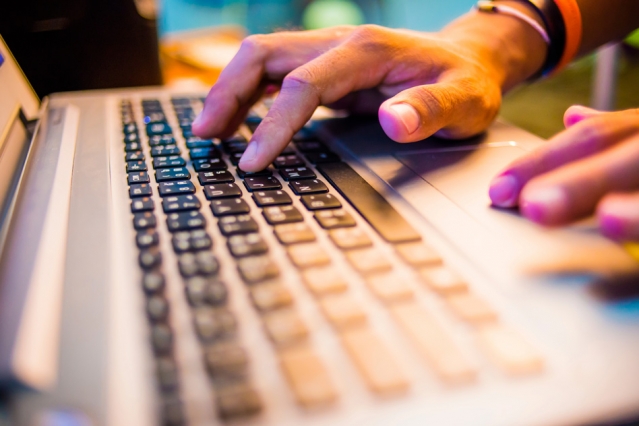 The technique is based on technology originally developed to replace computer passwords. (Photo Credit: MIT News)

Parkinson’s disease is the second most common neurodegenerative disorder in the developed world, with around 60,000 people diagnosed in the U.S. each year.

In a paper published today in the journal Scientific Reports, researchers at MIT and elsewhere describe a technique they have developed to monitor Parkinson’s disease progression as patients interact with a computer keyboard.

In this way the technique, which is based on technology originally developed to replace computer passwords, allows Parkinson’s signs to be monitored as people perform ordinary tasks such as typing emails or updating their Facebook status, according to Luca Giancardo, a former Catalyst Fellow in the Madrid-MIT M+Vision Consortium in the Research Laboratory of Electronics at MIT, and one of the paper’s lead authors.

“This approach uses something we do normally — interacting with a digital device — so it does not add any additional burden or take time away from daily activities,” he says.

Parkinson’s disease, which is caused by a loss of nerve cells in the brain leading to a reduction in levels of the chemical dopamine, is a progressive disorder with signs including tremors and motor difficulties, and ultimately severe disability and dementia.

Medication to replace dopamine levels or mimic dopamine’s activity can help to lessen the severity of its signs.

If Parkinson’s could be diagnosed earlier, researchers may even be able to develop drugs that could potentially stall the progression of the disease, according to Álvaro Sánchez-Ferro, joint lead author and a former Catalyst Fellow in the Madrid-MIT M+Vision Consortium. “The problem is that so far there has not been an easy method to provide this early detection, and one reason is that the progression of the disease is very slow,” he says.

Existing methods to evaluate the severity of Parkinson’s signs are based on trained medical personnel assessing the patient’s ability to perform a number of movement activities. However, these assessments tend to be carried out in a clinical setting, limiting how often they can be undertaken.

So the researchers set out to investigate whether keystroke dynamics, a technique used to identify a computer user by the time they take to press down and release each key — typically around 100 milliseconds — could be used to monitor the motor effects of Parkinson’s disease in the home.

In previous work the researchers had demonstrated that the technique can be used to spot signs of sleep inertia, or the decline in motor dexterity caused by grogginess on being suddenly woken.

In the new experiments, at Spanish medical clinics 12 de Octubre, Hospital Clinico, and HM CINAC, coordinated by Sánchez Ferro and co-author José Obeso at HM CINAC, the researchers asked 42 patients with early stage Parkinson’s disease and 43 healthy subjects to type out a text of their choosing for 10-15 minutes on a computer keyboard.

The computer was installed with software designed to measure the timing of each press and release.

When they analyzed the typing data, they found a significant variation in the timing of each press and release in patients with early stage Parkinson’s disease, while in the healthy control group this was much more uniform, Giancardo says.

“By looking at the variation of this press and release, we were able to find a signature that allows us to detect Parkinson’s disease in our cohort.”

To ensure the privacy of patients taking part in the test, the software does not monitor the words people type, he says.

The system can be installed as software on a standard computer, or added to the hardware of a device, or even deployed on a webpage.

“We envisage that this could be used to fill in the gaps between visits to the neurologist, for example, or between other tests that cannot be carried out continuously,” says Giancardo.

Monitoring patients’ signs as they go about their daily activities could help doctors determine the most effective dosage of medication to prescribe at that time, and could ultimately help researchers to develop treatments to halt the disease, says Sanchez-Ferro.

It could also help patients to monitor the effectiveness of activities that can reduce the effects of Parkinson’s disease, he says.

“There are activities such as sports and yoga that can significantly help with the symptoms, and so the Parkinson’s community has been looking for a way to measure Parkinson’s signs quantitatively, which has so far proven very difficult to do,” says Giancardo.

This is a very important piece of work, according to Bryan Strange, director of the Laboratory for Clinical Neuroscience within the Technical University of Madrid’s Center for Biomedical Technology, in Spain.

“At present the ability to monitor the motor signs of those with Parkinson’s or those who are starting to develop the disease is limited to a clinical setting,” he says.

This restricts the frequency with which such tests can be carried out. “This [test] is not something that requires the patient to do something out of the ordinary,” he adds.

The researchers hope the technique could ultimately be used to create algorithms that can detect signs of other neurological or motor-based disorders. They have already received interest from technology startup companies interested in helping the team translate the technology.

The work was supported, in part, by the Michael J. Fox Foundation for Parkinson’s Research, with grants awarded to Obeso and Martha Gray, the J. W. Kieckhefer Professor of Health Sciences and Technology and a professor of electrical engineering and computer science at MIT. The team also includes Teresa Arroyo Gallego, a PhD  student at the Universidad Polytecnica in Madrid; Ian Butterworth  a former Catalyst Fellow in the Madrid-MIT M+Vision Consortium; Michele Matarazzo of HM CINAC; Paloma Montero of Hospital Clinico San Carlos; and Veronica Puertas-Martin.