The U.S. territory of Puerto Rico is reporting its first case of Zika, a dengue-like virus transmitted by mosquitoes. Health Secretary Ana Rius said Thursday that the unidentified patient had not traveled recently and lives in the island’s eastern region.

Officials say symptoms are similar to those of dengue and chikungunya and can include a slight fever, headache and pain in the hands and feet. Scientists in Brazil have linked Zika infections to cases of babies being born with small heads, or microcephaly. 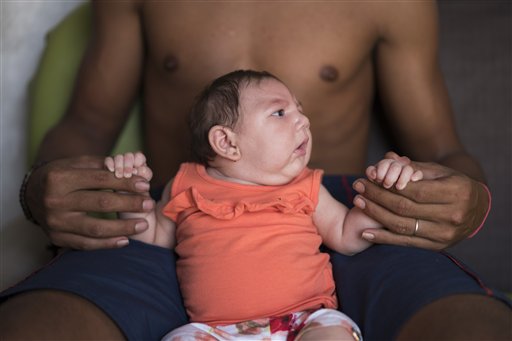 In this Dec. 23, 2015 photo, Dejailson Arruda holds his daughter Luiza at their house in Santa Cruz do Capibaribe, Pernambuco state, Brazil. Luiza was born in October with a rare condition, known as microcephaly. Luiza’s mother Angelica Pereira was infected with the Zika virus after a mosquito bite. Brazilian health authorities are convinced that Luiza’s condition is related to the Zika virus that infected her mother during pregnancy. (Courtesy of the Associated Press)