Cancer is a malignant force of nature that holds no prejudice when it invades tissue, permeates and forms new body sites. Ninety percent of deaths caused by cancer are due to tumors spreading throughout the body, a process called metastasis. Individual cancer cells detach from a tumor and pervade a body through blood vessels, a large quantity of the cancerous cells die in transit but the successful cells migrate through a body before leaving blood vessels and reproducing in a new location.

Cancer arises from one single cell. The transformation from a normal cell into a tumor cell is a multistage process, typically a progression from a pre-cancerous lesion to malignant tumors. These changes are the result of the interaction between a person’s genetic factors and a range of other categories of external agents including: chemical carcinogens, such as asbestos and components of tobacco smoke, or biological carcinogens, such as infections from certain viruses, bacteria or parasites. According to the World Health Organization (WHO) colon cancer is the third most common form of cancer and 60% of the world’s total new cases of cancer occur in Africa, Asia, and Central & South America. 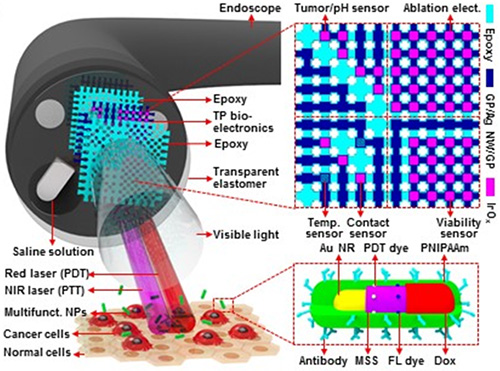 Figure 1: Schematic illustrations of the design strategy and mode of use for the multifunctional endoscope system based on transparent bioelectronic devices and theranostic nanoparticles

A scientific team from the Center for Nanoparticle Research within the Institute for Basic Science (IBS) has developed a multifunctional endoscope that integrates transparent bioelectronics such as lasers with theranostic nanoparticles (NPs) – therapy to test new medication and tailor a unique treatment plan for a patient.

Conventional endoscopes lack the spatial resolution necessary to detect and treat small cancers and other abnormalities. They are equipped with a flexible tube fitted with a camera, lens and light delivery system, providing both maneuverability and direct visualization of the gastrointestinal tract. However, despite the proven utility of current surgical endoscopes, onboard sensors coupled with treatments are unavailable because of the macro-scale size of the conventional system, preventing diagnosis and therapy of micro-scale tumors.

The team, led by the director of the Centre for Nanopaticle Research Professor Taeghwan Hyeon, demonstrated a multifunctional surgical endoscope system to diagnose and treat intestinal diseases, such as colon cancers. This ‘smart’ endoscope system contains transparent bioelectronics, which provides pH-based sensing combined with radio frequency ablation (RFA); a medical procedure in which part of the electrical conduction of a tumor is ablated using heat generated from a medium frequency alternating current.

The system’s additional sensors for monitoring mechanical contacts and mapping temperatures provide accurate physiological sensing capabilities during cancer detection and ablation. The transparency enables optimal integration of a number of multifunctional sensing and therapeutic components on the endoscope tip without blocking the line of sight of the camera or light. By loading transparent bioelectronics on the camera of the endoscope, the tissue observed through the camera in fluorescence mapping and phototherapies can be exactly matched with the characterized ablated tissues by transparent devices. The system also has custom-designed biocompatible NPs with phototherapeutic and chemotherapeutic agents, which can be delivered locally and activated with light. According to the team’s paper, this multifunctional endoscopic system could be useful for the detection of flat or depressed abnormal growths. Synergistic effects between the transparent bioelectronics and theranostic NPs can enhance the accuracy of tumor detection and provide treatment.

Figure 2: Images of the mouse model with HT-29 tumors after multimodal treatments (from left to right: control, PDT, PTT, PTT chemo and combined

Controlled laboratory experiments within living organisms, known as in vivo experiments, were performed on mice. The results highlighted the utility of this technology for its accurate detection, delineation and rapid targeted therapy of colon cancer or precancerous lesions. An intravenous injection of NPs was administered to actively target colon cancer cells. Imaging of fluorescence dyes loaded on these NPs provided optical information about the spatial distribution of cancer cells. The endoscope allowed laser light to access suspicious sites exposed to NPs. These regions were easily observed due to the transparency of the integrated transparent bioelectronics on the endoscope camera. The transparent bioelectronics and associated sensors provided additional electrochemical analysis of the tumor distribution. After a suspicious area of tissue is optically observed and potentially cancerous tissue identified, they can be treated by several modalities.

Direct control of the laser light, which is delivered through an optical fiber and guided with the endoscope, can overcome many issues related to the penetration depth of light. Because colon cancers are normally located in superficial regions, the team’s system is less affected by the penetration depth problem of light in comparison with other tumor cases.

The results of the experiments were startling. After a two week treatment plan the tumors significantly decreased on the mouse model. However, when tumors were treated without injecting NPs or using chemo-drugs, the tumor volume increased. The combined therapy group exhibited a marked decrease in the tumor volume.

Multifunctional endoscope systems have the potential to reduce the procedure time and improve the efficiency of minimally invasive surgical procedures for colon cancer treatment. Furthermore, efficient therapy can contribute to the excellent oncologic and economic yield for various gastrointestinal cancers or precancerous lesions in the future.

The paper entitled ‘An endoscope with integrated transparent bioelectronics and theranostic nanoparticles for colon cancer treatment’ was originally published on Nature Communication on November 30.