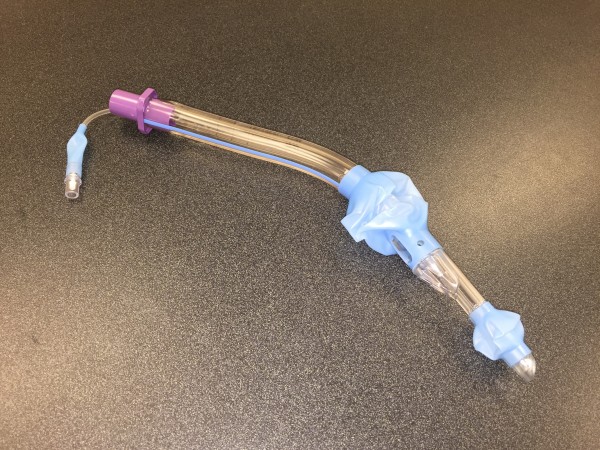 The King laryngeal tube, one of the devices begin studied in the out-of-hospital cardiac arrest trial. (Credit: Henry Wang, M.D.)

“Out-of-hospital cardiac arrest is a major public health problem in this country with some 300,000 cases per year,” said Henry Wang, M.D., professor and vice chair for Research in the UAB Department of Emergency Medicine. “Only about 10 percent survive, and airway management during cardiac arrest is an extremely important aspect of treatment.”

Wang is the national principal investigator for the Pragmatic Airway Resuscitation Trial — or PART — which will examine the older endotracheal tube’s performance against the newer King laryngeal tube to see whether either produces higher 72-hour survival rates in adults with cardiac arrest treated by EMS responders.

Paramedics often care for patients with cardiac arrest by inserting a plastic endotracheal tube into the lungs to assist with breathing. The King LT is a newer device that is easier to insert than the endotracheal tube.

“While both are commonly used by paramedics, we do not have a consensus as to which is a better choice for use in adult cardiac arrest,” Wang said. “The endotracheal tube can be difficult and time-consuming to insert properly. The King LT is just one of several newer airway devices that show great promise but need to be studied.”

PART will be conducted in Birmingham, Dallas, Milwaukee, Pittsburgh and Portland. Locally, the Bessemer Fire Department is the first EMS agency in the country to take part.