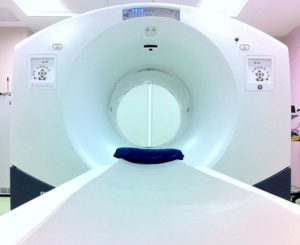 This is a positron emission tomography/computed tomography (PET/CT) scanner. [Image from Wikipedia]

Researchers recently stumbled upon a chemical mechanism that could be used to make radioactive tracers, according to new research from the Department of Energy’s Lawrence Berkeley National Laboratory.

The discovery resulted in an alternative way to create chemical compounds that are beneficial to noninvasive, high-resolution, 3D medical imaging technology like positron emission tomography (PET) scans. The researchers also suggest that the chemical mechanism discovery could create a better understanding of basic chemical reaction processes with catalysts like copper and gold.

While the researchers at Berkeley Lab and UC Berkeley were studying the chemical reactions of gold-containing molecules, they discovered a chemical mechanism that could form trifluoromethyl (CF3) compounds and attach them to other chemical compounds. CF3 compounds with the radioactive isotope fluorine-18 act as a tracer that can be detected by PET scanners.

Drug companies have also had an interest in using CF3 compounds in pharmaceuticals. The compounds can make drugs more selective, effective or potent, according to the research. Drugs like the antidepressant Prozac, HIV drug Sustiva and the anti-inflammatory drug Celebrex all have CF3 compounds.

“This research allows us to make new classes of radioactive tracers that had been too difficult, or even impossible, to prepare previously,” said Mark D. Levin, lead author of the study, in a press release. “These CF3 groups have long been known as medicinal chemistry boons, but they were traditionally very difficult to install. We’ve developed a chemical technique, based on a new discovery in gold chemistry, that lets us attach a radioactive fluorine atom to a specific class of molecule that was previously challenging to do.”

The researchers report that there are about 2,500 PET scanners in the U.S. that perform an estimated 2 million scans per year. PET scans usually provide details about the chemical activity in certain parts of the body and could be helpful in diagnosing cancer, heart disease and brain disorders, according to the Mayo Clinic.

Fluorine-18 is a tracer that is typically used to show cancer spots in the body through PET scans. The researchers decided to use fluorine-18 in CF3 compounds they created. Fluorine-18’s radioactive output is halved every 110 minutes, so the chemical process used to make it a label has to rapidly attach it to desired compounds.

Prior to this discovery, the researchers were looking for a chemical process that could produce a fluorine-containing compound called hexafluoroethane that etches silicon for computer chips and is associated with a gold-containing molecule. To do this, they used a boron-containing compound.

The researchers found a mechanism that allows the boron compound to act on a CF3 compound in order to make a CF2 fragment that is associated with the gold catalyst. The fragment could then bond with other chemical compounds to form a new CF3-containing compound.

“When we got the first inkling that our new mechanism might be useful for developing radioactive tracers, we started looking at Berkeley Lab and its Biomedical Isotope Facility, which was really central to this work,” Levin said.

The researchers learned how to use fluorine-18 marker atoms in the chemical mechanism to create new compounds.

“We think these gold compounds will be a powerful platform to prepare new tracers, and we’re working to improve the system and to identify promising, clinically-relevant drug targets,” Levin said. “Also, the new mechanism may shed light on broader problems.” 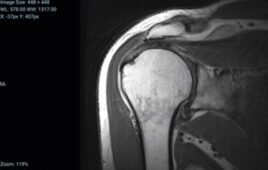