Duke University researchers have taken a major step towards realizing a new form of MRI that could record biochemical reactions in the body as they happen.

In the March 25 issue of Science Advances, they report the discovery of a new class of molecular tags that enhance MRI signals by 10,000-fold and generate detectable signals that last over an hour. The tags are biocompatible and inexpensive to produce, paving the way for widespread use of magnetic resonance imaging (MRI) to monitor metabolic processes of conditions like cancer and heart disease in real time.

“This represents a completely new class of molecules that doesn’t look anything at all like what people thought could be made into MRI tags,” said Warren S. Warren, James B. Duke Professor and Chair of Physics at Duke, and senior author on the study. “We envision it could provide a whole new way to use MRI to learn about the biochemistry of disease.” 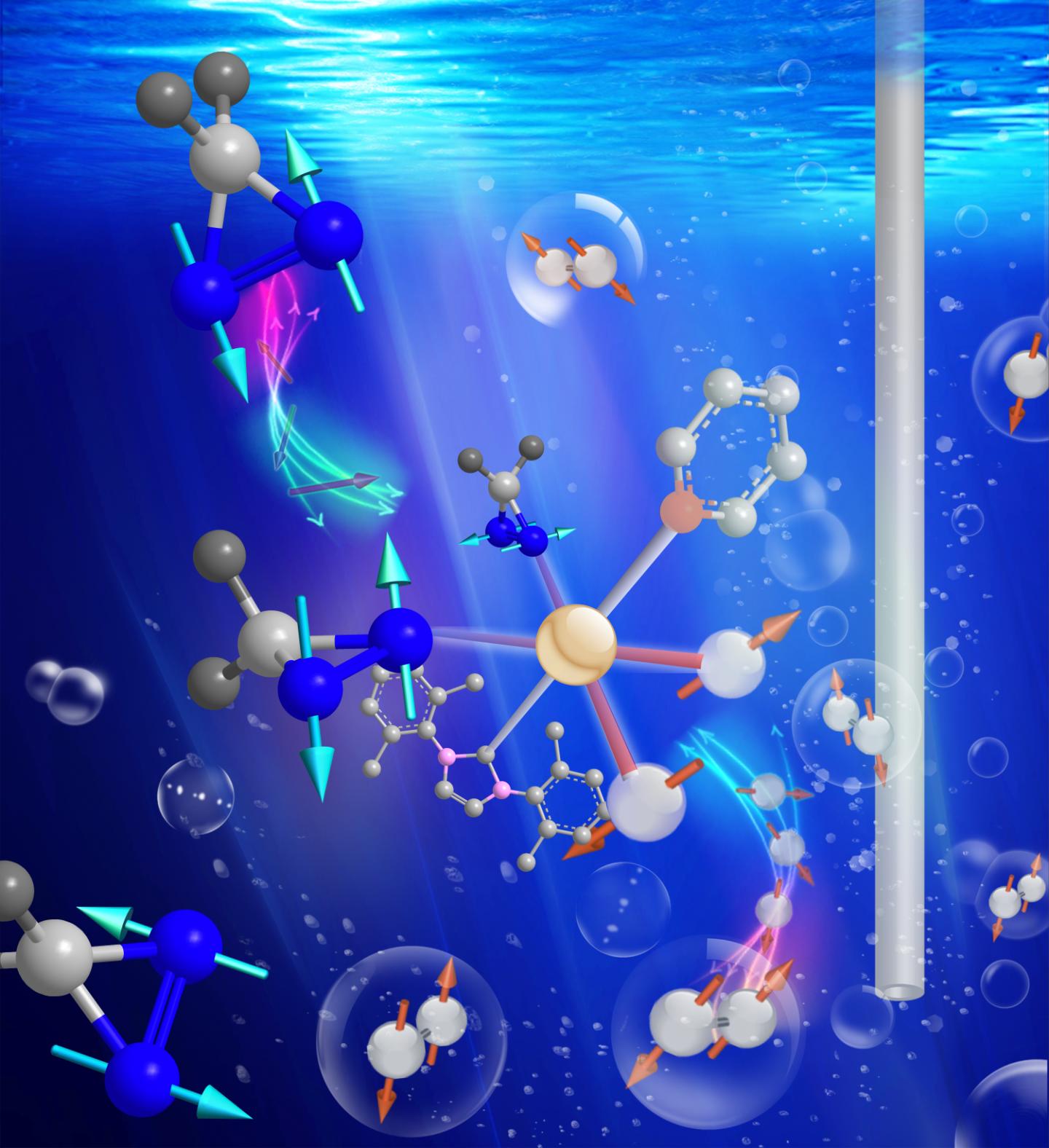 Duke scientists have discovered a new class of inexpensive and long-lived molecular tags that enhance MRI signals by 10,000-fold. To activate the tags, the researchers mix them with a newly developed catalyst (center) and a special form of hydrogen (gray), converting them into long-lived magnetic resonance ‘lightbulbs’ that might be used to track disease metabolism in real time. (Credit: Thomas Theis, Duke University)

MRI takes advantage of a property called spin, which makes the nuclei in hydrogen atoms act like tiny magnets. Applying a strong magnetic field, followed by a series of radio waves, induces these hydrogen magnets to broadcast their locations. Since most of the hydrogen atoms in the body are bound up in water, the technique is used in clinical settings to create detailed images of soft tissues like organs, blood vessels and tumors inside the body.

But the technique also has the potential to show body chemistry in action, said Thomas Theis, assistant research professor of chemistry at Duke and co-lead author on the paper. “With magnetic resonance in general, you have this unique sensitivity to chemical transformations. You can see them and track them in real time,” Theis said.

MRI’s ability to track chemical transformations in the body has been limited by the low sensitivity of the technique, which makes small numbers of molecules impossible to detect without using unattainably massive magnetic fields.

For the past decade, researchers have been developing methods to “hyperpolarize” biologically important molecules, converting them into what Warren calls magnetic resonance “lightbulbs.”

With this boosted signal, these “lightbulbs” can be detected even in low numbers. “Hyperpolarization gives them 10,000 times more signal than they would normally have if they had just been magnetized in an ordinary magnetic field,” Warren said.

While promising, Warren says these hyperpolarization techniques face two fundamental problems: incredibly expensive equipment — around 3 million dollars for one machine — and most of these molecular lightbulbs burn out in a matter of seconds.

“It’s hard to take an image with an agent that is only visible for seconds, and there are a lot of biological processes you could never hope to see,” said Warren. “We wanted to try to figure out what molecules could give extremely long-lived signals so that you could look at slower processes.” 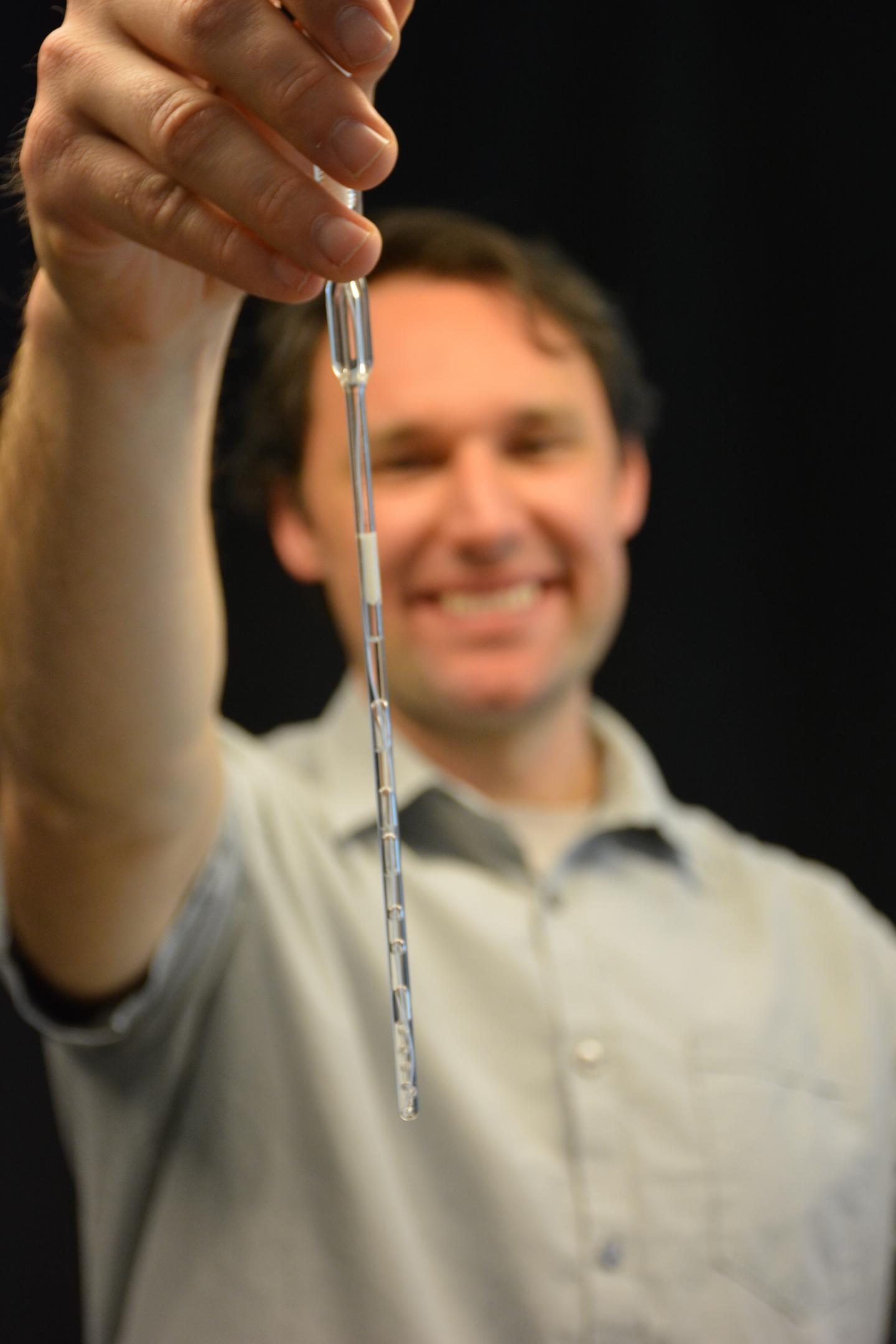 Inside this bubbling vial, Duke chemist Thomas Theis holds a catalyst that is transferring polarization from hydrogen gas to a molecular tag, turning it into a long-lived ‘lightbulb’ for more precise magnetic resonance imaging. (Credit: Kara Manke, Duke University)

Jerry Ortiz Jr., a graduate student at Duke and co-lead author on the paper, synthesized a series of molecules containing diazarines, a chemical structure which is composed of two nitrogen atoms bound together in a ring. Diazirines were a promising target for screening because their geometry traps hyperpolarization in a “hidden state” where it cannot relax quickly.

Using a simple and inexpensive approach to hyperpolarization called SABRE-SHEATH, in which the molecular tags are mixed with a spin-polarized form of hydrogen and a catalyst, the researchers were able to rapidly hyperpolarize one of the diazirine-containing molecules, greatly enhancing its magnetic resonance signals for over an hour.

Qiu Wang, assistant professor of chemistry at Duke and co-author on the paper, said this structure is a particularly exciting target for hyperpolarization because it has already been demonstrated as a tag for other types of biomedical imaging.

“It can be tagged on small molecules, macro molecules, amino acids, without changing the intrinsic properties of the original compound,” said Wang. “We are really interested to see if it would be possible to use it as a general imaging tag.”

The scientists believe their SABRE-SHEATH catalyst could be used to hyperpolarize a wide variety of chemical structures at a fraction of the cost of other methods.

“You could envision, in five or ten years, you’ve got the container with the catalyst, you’ve got the bulb with the hydrogen gas. In a minute, you’ve made the hyperpolarized agent, and on the fly you could actually take an image,” Warren said. “That is something that is simply inconceivable by any other method.”