In an important step toward endoscopic diagnosis of cancer, researchers have developed a handheld fiber optic probe that can be used to perform multiple nonlinear imaging techniques without the need for tissue staining. The new multimodal imaging probe uses an ultrafast laser to create nonlinear optical effects in tissue that can reveal cancer and other diseases.

Today, cancer is typically diagnosed by removing a bit of tissue with a biopsy and then sending that tissue to a specially trained pathologist who stains the tissue and uses a microscope to look for cancerous cells. The ability for doctors to skip the biopsy and use a multimodal imaging endoscope to diagnose cancer on the spot would save valuable time and could also allow surgeons to more easily differentiate between cancerous and healthy tissue during surgery.

With the new probe, imaging techniques that previously required bulky table-top instruments can be performed with a handheld device measuring only 8 millimeters in diameter, about the same diameter as a ballpoint pen. If miniaturized further, the probe could easily be integrated into an endoscope for nonlinear multimodal imaging inside the body.

The researchers detail their new handheld probe in Optica, The Optical Society’s journal for high impact research. It is the first miniaturized probe for multimodal biological imaging to incorporate a multicore imaging fiber, a type of optical fiber consisting of several thousand light-guiding elements. This special imaging fiber allowed the researchers to keep all moving parts and electric power outside of the probe head, making the probe easy and safe to use in the body.

The researchers have tested the probe with many types of tissue samples, but because it is currently designed for forward view mode, the primary applications of the probe would likely include skin, brain or head and neck surgery. They are working on implementing a side view mode that could be used to investigate hollow organs and arteries such as the colon, bladder or aorta. 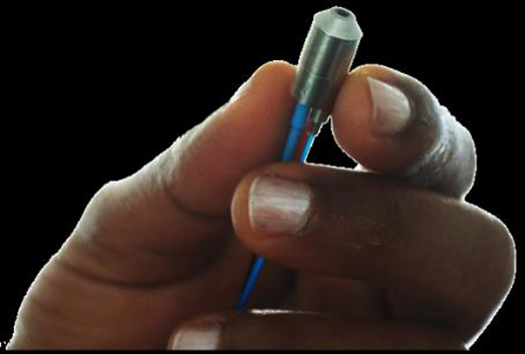 “The new probe serves as a miniaturized microscope that uses near-infrared lasers to investigate tissue,” says Popp. “Different components of biological tissue react differently to the excitation lasers, and their unique response gives us information about the molecular composition and morphology within the tissue.”

The handheld multimodal imaging probe can simultaneously acquire several types of images: coherent anti-stokes Raman scattering, second harmonic generation and two-photon excited auto-fluorescence. These nonlinear imaging techniques have been shown to be useful for clinical diagnostics, including identifying cancerous cells, but it has been difficult to miniaturize the required instrumentation for use inside the body.

The probe’s reduced size comes from its use of gradient index, or GRIN, lenses to focus the laser light. Compared to traditional spherical lenses that use complicated shaped surfaces to focus light, GRIN lenses can be made very small because they focus light through continuous refractive index changes within the lens material. Popp’s research team collaborated with scientists from Grintech Gmbh who designed GRIN lenses only 1.8 millimeters in diameter and helped incorporate the robust lens assembly into a small aluminum housing.

Endoscopes designed for nonlinear imaging commonly use moving mirrors and electromechanical devices for point by point laser scanning in the probe head. Using the multicore imaging fiber allowed the researchers to further reduce the device’s size by moving the laser scanning out of the probe head and away from the sample site. Because the fiber’s thousands of light guiding elements, or cores, preserve the spatial relationship of the light between the two ends of the fiber, the scanning can be performed at the opposite end of the fiber, making an endoscopic approach much easier.

“Compared to other endoscopic nonlinear imaging approaches, our fiber probe stands out due to its simplicity,” says Popp. “Since no moving parts are incorporated in the probe head, possible misalignments in the optics are limited and the probe’s overall lifetime is increased.”

The researchers demonstrated the unique capabilities of the multicore imaging fiber by moving one end of the probe across a sample and transferring the acquired images to the other end. “This is not a trivial task since the cores of the imaging fiber differ in size and shape, hindering efficient and homogeneous coupling of the excitation lasers,” says Popp. “Furthermore, we had to deal with unwanted effects like different wavelengths interacting inside the fiber and core-to-core light coupling.”

They also demonstrated that the probe could acquire separate coherent anti-stokes Raman scattering, second harmonic generation and two-photon excited autofluorescence images of healthy human skin tissue samples with a resolution of 2048 by 2048 pixels for a scanned area of 300 by 300 microns. This resolution and field of view is sufficient for identifying tumor borders, and the probe can be moved over the tissue surface to get an overview of the affected area.

The researchers are working to use algorithms to improve the quality of the multimodal images, which appear pixelated because of the structure of the multicore imaging fiber. As a next step, they plan to test the probe in animal models and with patients in a clinical setting.