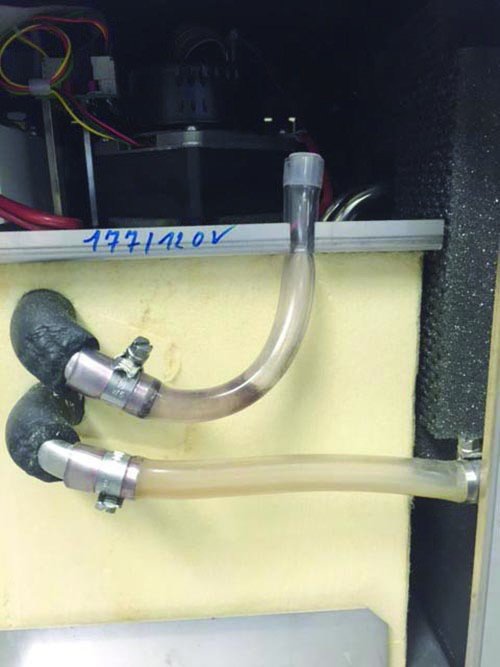 Contamination can be seen in the dark area of a heater-cooler device tube. (Credit: Photo provided by Keith B. Allen, MD.)

Over the last few years, a growing number of serious infections have been linked to bacteria forming in heater-cooler devices (HCDs) used in cardiac surgery operating rooms. In these cases, aerosolized bacteria, predominantly nontuberculous mycobacterium (NTM) from the HCDs, contaminated the operative field. Emerging evidence regarding the incidence and challenges of detecting the infections has triggered alarms at the US Food and Drug Administration and regulatory agencies in Europe.

The latest update on the threat of NTM was presented Sunday by cardiothoracic surgeons and experts in perfusion and infectious diseases during a special session, “Heater-Cooler-Induced Infections: Practices, Protocols, and Mitigation Strategies.”

“We are just beginning to scratch the surface, even though this research has been going on for more than 2 years,” says Keith B. Allen, MD, of St. Luke’s Mid American Heart Institute and the University of Missouri–Kansas City, the lead author of an abstract focusing on the problem. He has worked with other experts at the request of the FDA, which organized a special conference last summer to address the problem.

The infections associated with HCDs have a latency period of up to 72 months, with a mean time of 17 months from surgery to onset of symptoms, said Neil Fishman, MD, an infectious disease expert at the University of Pennsylvania Perelman School of Medicine in Philadelphia.

The incidence of infections has been tracked in the Medical Device Report database, which collects reports from manufacturers, importers, and user facilities, as well as physicians, patients, and consumers. The database has 339 reports related to HCDs between January 2010 and August 2016. The surgical procedure involving HCDs was identified in 94 reports, and 50 percent of them involved device implants, such as left ventricular assist devices, prosthetic valves/rings, and vascular grafts.

NTM was the most frequent organism cited in the reports, and Mycobacterium chimaera was the predominate isolate. Detection is challenging because it takes two to eight weeks to grow on mycobacterial media, Dr. Fishman says. Identifying the species requires sequencing that is performed at only a “handful of labs” in the US.

“This is a device problem, not a surgical problem,” he adds.

The infections are linked to HCDs from five different manufacturers that are used in the US and around the world, with 89 percent linked to one manufacturer, Dr. Allen said, emphasizing that all of the manufacturers are working with regulatory agencies to resolve the problem.

The FDA recommends that all institutions adhere to manufacturer instructions for HCDs, use only sterile or filtered water in the devices, direct HCD exhaust away from the surgical field, and remove units with signs of contamination.

The FDA and the Centers for Disease Control recommend that some HCDs manufactured before September 2014 be transitioned out of service and that patients exposed to the devices since Jan. 1, 2012, be notified in writing about the risk of infection.

The risk of infection increases with length of exposure to NTM, which is aerosolized from the HCDs. Clinical presentations of infection include fatigue, fever, sweating, dyspnea, weight loss, and cough. Because surgical wound infections are involved, treatment includes removal of the involved device and multiple-drug therapy, Dr. Fishman said.

“We don’t know how long to treat these infections. At the least, most people are treating for nine months, but some people are extending therapy to a year or 18 months,” he says. “The outcomes are not great. In general, the overall mortality is greater than 50 percent. That is attributed almost certainly to the delayed diagnosis.”

Miguel Sousa Uva, MD, PhD, President of the European Association for Cardio-Thoracic Surgery, commented on the European experience with these infections, which were reported overseas before being identified in the US.

Larry L. Shears, MD, of Wellspan Health in Chattanooga, Tenn., first experienced NTM infections at Hershey Medical Center in York, Penn., in June 2015. He discussed patient symptoms, adding that it “appeared as though they had a malignancy.”

Kenneth G. Shann, CCP, LP, Director of Perfusion Services at Massachusetts General Hospital in Boston, offered recommendations on properly caring for HCDs. He suggested that a checklist be used to clean devices, that cleanings be documented, and that the serial numbers of HCDs used in procedures be recorded.

STS President Joseph E. Bavaria, MD noted that the Society has issued a statement about HCDs, as well as provided advisories from the CDC and FDA, on its website at http://www.sts.org/heater-cooler.