A new machine may better preserve donated organs and eliminate the method of packing organs on ice while rushing to the hospital. British researchers said keeping some livers at body temperature may be a better tactic, according to AP News.

The machine is able to pump the liver full of blood and nutrients until the liver reaches its destination. Basically, it acts as a life-support system for the organ. Other machines are also being studied for lung and heart transplants.

As of now, keeping transplants in ice will continue until more details of the machine come forth. Researchers hope that storing organs in a human body environment will increase the success rate of transplants and allow valuable donated organs to keep for a longer period of time.

“The biggest challenge in liver transplantation is the desperate shortage of organs,” said Dr. David Nasralla of the University of Oxford, who led the study in Britain and Europe, according to AP News. “We found that livers that went on the machine were more likely to be transplanted.”

Typically, a donated heart or lung can be stored for about four to six hours, and 12 hours for a liver. Oftentimes, organs can get discarded if surgeons fear there are health concerns or because of the donor’s age.

Dr. David Klassen of United Network for Organ Sharing, said this machine could be a fundamental approach for preserving organs. He called it “really exciting technology” that may be more beneficial for specific cases rather than all organ donation situations. 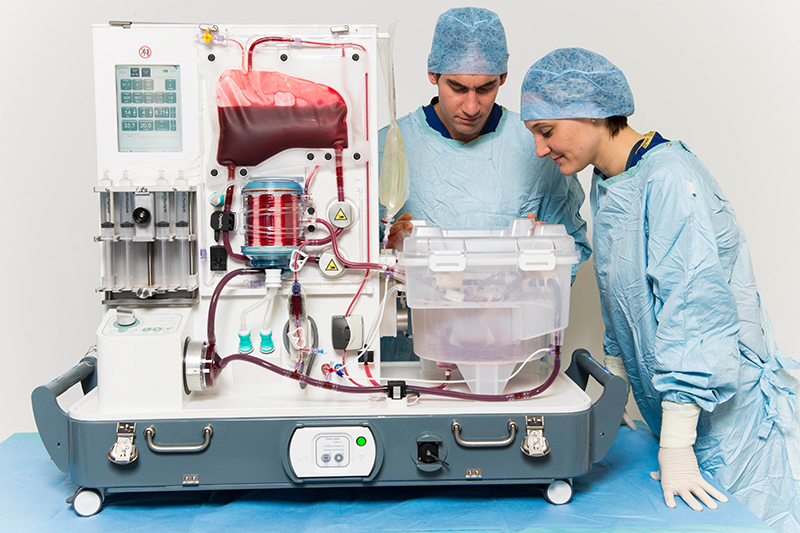 This 2016 photo provided by OrganOx shows Drs. David Nasralla and Annemarie Weissenbacher with the company’s metra device holding a liver in Oxford, England. On Wednesday, April 18, 2018, British researchers said that keeping at least some transplant livers at body temperature may work better than cooling _ using a machine that pumps them full of blood and nutrients. (OrganOx via AP)

The study involved 220 liver transplants where some were assigned to be put into coolers and others used the machine made by Britain’s OrganOx Ltd. The machine that kept organs functioning with warm fluids were healthier when transplanted, researchers reported in the Nature journal. The machine livers also had less cellular damage while being stored, which is a risk for transplant failure. The surgeons were able to preserve the warm livers longer and discarded less livers than those kept on ice. They transplanted 20 percent more warmed organs than cooled ones, the study said.

Overall, it was not a big enough study to determine if there were any differences in patient survival.

Although results are promising, researchers are not sure there is enough evidence to implement such an expensive and immense change. Dr. Devin Eckhoff, transplant division director at the University of Alabama in Birmingham, said they hope to make the machine worthwhile and determine when best to use it.

OrganOx’s liver machine has been approved abroad, but is still experimental in the U.S.

Right now there is still more study needed to determine whether spending thousands on this technical machine will prove beneficial enough to let doctors save more organs and remain cost-effective.

Feature Photo Credit: This photo provided by OrganOx on April 18, 2018 shows the company’s metra device, used to keep organs functioning during transport. On Wednesday, April 18, 2018, British researchers said that keeping at least some transplant livers at body temperature may work better than cooling _ using a machine that pumps them full of blood and nutrients. (OrganOx via AP)