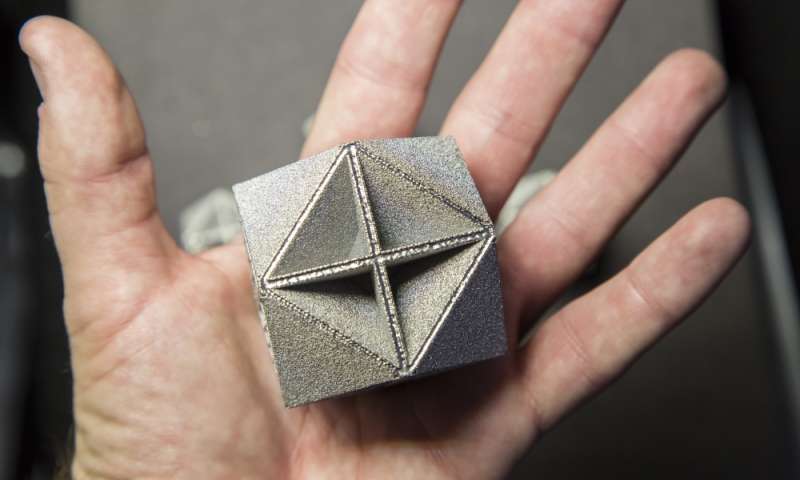 In a letter published in the journal Nature, Berger, with UCSB materials and mechanical engineering professor Robert McMeeking and materials scientist Haydn N. G. Wadley from the University of Virginia, prove that the three-dimensional pyramid-and-cross cell geometry Berger conceived is the first of its kind to achieve the performance predicted by theoretical bounds. Its lightness, strength and versatility, according to Berger, lends itself well to a variety of applications, from buildings to vehicles to packaging and transport.

Called Isomax, the beauty of this solid foam—in this case loosely defined as a combination of a stiff substance and air pockets—lay in the geometry within. Instead of the typical assemblage of bubbles or a honeycomb arrangement, the ordered cells were set apart by walls forming the shapes of pyramids with three sides and a base, and octahedra, reinforced inside with a “cross” of intersecting diagonal walls.

The combination of the pyramid and cross-shaped cells, said Berger, resulted in a structure that had low density—mostly air, in fact—yet was uncommonly strong for its mass.

“The Isomax geometry is maximally stiff in all directions,” explains Berger. Other geometries—a honeycomb, for instance—may be able to resist forces from one direction, but approach it from a different direction and the cell will collapse easily. Isomax’s cell structure makes it possible for the material to resist crushing and shearing forces without the need to make it heavier or denser.

However, for all the early interest that his proposed metamaterial generated and the computer modeling that supported his claims, Berger knew he couldn’t rest until science backed him up.

“There was obviously a lot of positive feedback, but for me as a scientist, it’s a bit too much hand waving until you have something in a peer-reviewed journal,” Berger says.

And now the work has borne fruit.

“I carried out some simplified calculations of the stiffnesses of some of the foams and was able to see that the pencil-and-paper results agreed with the computer calculations,” explains McMeeking, whose research focuses on computational science and engineering as well as the mechanics of materials, including their fracture and durability. “This gave us confidence that the computer calculations were both correct and being formulated accurately.”

McMeeking’s calculations also proved that, in the case of the lightest weight foams, they were identifying the optimal geometries of the foams that enabled them to achieve the maximum possible stiffness. “That finding also meant that we could be sure that the computer calculations were also successfully obtaining the optimal geometries for the heavier weight foams, where pencil-and-paper calculations are almost impossible to carry out because they are much more complicated,” he says.

The closed-form solutions and equations developed to create the mechanical model of the metamaterial’s behavior “matched up beautifully” with the earlier computer models, says Berger.

Given its properties, Isomax “is going to be a very interesting metamaterial,” says Wadley, whose research spans the synthesis, structure and performance of novel materials. “It will also be an excellent thermal insulating and sound absorbing material. Potential applications for this ultralight material are likely to emerge in aerospace structures, for lightweighting automobiles and in many robotic machines, especially mobile types that carry their own power and must maneuver.”

The development could not have better timing. As resources become more limited and concern for energy efficiency grows, a material with this mass relative to its strength would require fewer resources to produce and less fuel to transport. The simple geometry makes it versatile enough to fabricate for a variety of situations, and, functionally graded, it can be used to create objects with varying levels of stiffness from one end to another, such as prosthetics and replacement joints, and the design is compatible with manufacturing methods from origami-like folding to bonding and 3D printing.

The study is one of a series of steps investigating the potential of this metamaterial. Berger and team are currently following up with experimental analysis and are looking into manufacturing methods that may allow for efficient fabrication.