Two years ago, Zion Harvey made headlines as the first child to undergo a successful hand transplant surgery. Now, several physicians and researchers associated with the case are sharing extensive details of the surgery and its outcomes. The paper — with thirty authors — was published this week by The Lancet.

According to a report by CNN, doctors who have been following Harvey’s recovery process are quick to point to some of the simple tasks the boy can now perform as evidence of the surgery’s long-term success.

Sandra Amaral, MD, MHS, medical director of various transplant programs at Children’s Hospital of Philadelphia, says Harvey was excited when he was able to grip a baseball bat, which happened within a year of the surgery. From there, his transplanted hands have only gotten stronger and more agile.

“Most of his functional outcomes or progress have been really related to doing things more efficiently and effectively,” she said. “A few new things that he can do: zip his pants, rip open a granola bar by himself, and manipulate it to eat it.” 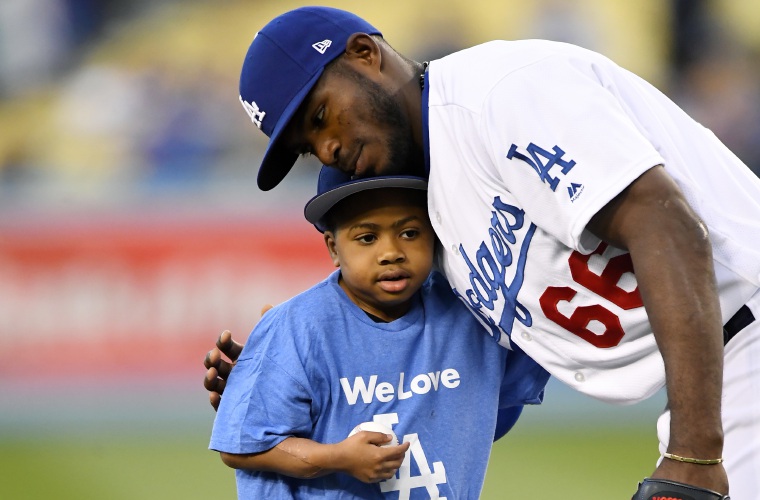 Zion Harvey, 10, gets a hug from Los Angeles Dodgers’ Yasiel Puig after throwing out the ceremonial first pitch at a game between the Dodgers and the Arizona Diamondbacks, Friday, April 14, 2017, in Los Angeles. (AP Photo/Mark J. Terrill)

Harvey’s hands and feet were amputated after he contracted a serious sepsis infection when he was a toddler. He has long had prosthetic legs to help him walk, but the lost hands were a different challenge. In July 2015, Harvey underwent the 10-hour hand transplant surgery at Children’s Hospital of Philadelphia.

Even the patient clearances necessary for the new paper confirm how far Harvey has come since that day.

“For our case report, he was actually able to write out his name for me to provide photo release consent,” Amaral told CNN.

Although Harvey was the first child to successfully undergo the surgery, he certainly won’t be the last. Studying Harvey’s ongoing positive outcomes provides critical insights for surgeons moving forward with new cases. According to L. Scott Levin, MD, FACS, director of the hand transplantation program at Children’s Hospital of Philadelphia, another candidate for the procedure is currently being evaluated.

“So the program is continuing,” explained Levin. “This kind of transplant is here to stay.”