Thomas Jull, ITL VA Inc.’s Vice President. The company began operating from Richmond, VA in May 2013, initially offering service and aftersales support for products manufactured by ITL in the UK and sold into the U.S. market. The Virginia facility is now working to provide a domestic contract manufacturing service. It also provides a route to market for companies looking to break into the U.S. medical device market. As well as expanding into manufacturing, ITL VA offers a pay-as-you-go medical device consultancy service for product development.

Over the years, the general consensus on ‘CE mark vs FDA approval’ for launching a medical device has been that the former route is the more favored option (especially for smaller or start-up companies).

This common perspective, principally amongst the industry innovators familiar with stories of the federal agency’s crushing hammer, is the result of longer times to market, higher costs and lower approval rate associated with the latter route.

However, a change in this hypothesis might be on the horizon, with the introduction of new EU regulations. 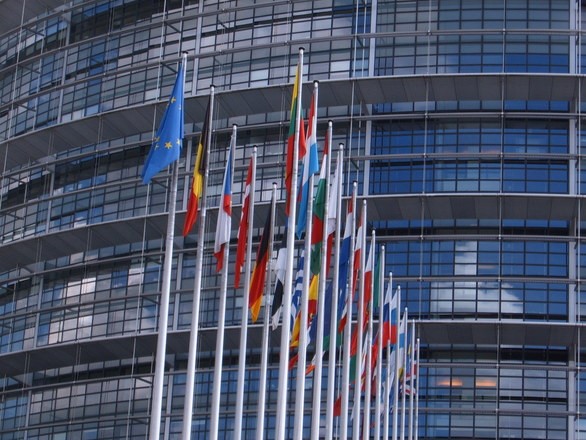 Back in May, I sat in on a workshop presented by Bassil Akra of TÜV SÜD and Rob Packard of the Medical Device Academy entitled ‘How to prepare a Medical Device CE marking submission’.  They gave an update on the new European medical device regulations and an overview of the Technical File requirements for CE mark submission.

The room was full of entrepreneurs with products which at some point would require a conformity marking of their own. A moment from the workshop that resonated with me was when a fellow delegate said, “CE marking has always been easier to obtain than FDA approval”, to which Bassil replied, “If that’s the case, it soon might not be”.

What was interesting from that point forward, as Bassil explained the legal manufacturer’s responsibilities and requirements for CE mark in the future, was the silence and look of concern on people’s faces, for which there were two main reasons:

1. Most start-ups or small medical device companies may have limited experience/resources to navigate the CE mark submission process on their own, making the task a daunting one. – If this is you, you might be interested in our article, “Do I Need a QMS if I Outsource My Medical Device Manufacturing?”

2. The CE mark route used to be thought of as ‘more predictable.’ In an article from 2012, Charlie Chi wrote: “The regulatory process in Europe is less bureaucratic, more efficient, and more predictable than in the U.S.”

Albeit, the new regulations are making CE look more like the FDA approach. 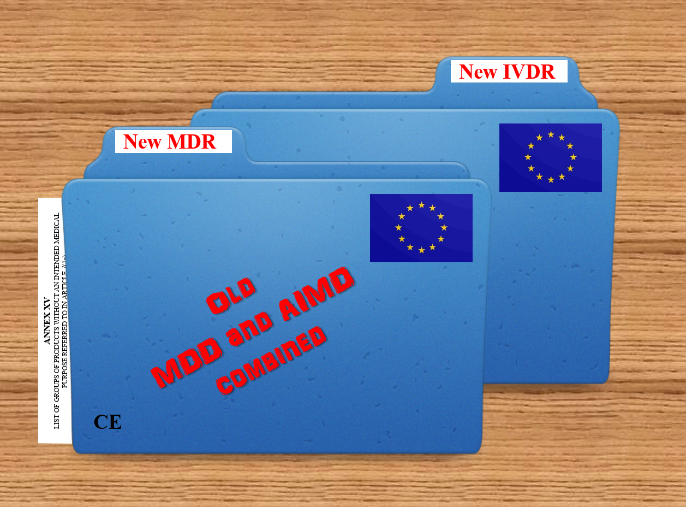 So, what are these changes which are causing uncertainty in the industry?

First off it’s important to note that once the regulations comes into effect they will apply to existing devices that already bear the CE mark, not just new devices or those launched in the future.

What’s more, 98/79/EC, the current directive for In Vitro Diagnostic (IVD) Medical Devices will also be updated in a new IVDR.

For the new MDR, the key differences will consist of:

An extended scope for ‘medical device’ and ‘active implantable’

The proposed MDR as set forth in the published text by the European Commission back in June 2016 states in Chapter I, Article 1:
“1a. This regulation shall also apply to the groups of products without an intended medical purpose that are listed in Annex XV… 1b. accessories to medical devices and products listed in Annex XV to which this Regulation applies pursuant to paragraph 1a shall hereinafter be referred to as ‘devices’.”

What this means, as per Annex XV, is that products such as contact lenses, sticky plasters, dental filling material, breast implants, pregnancy tests and equipment which uses electromagnetic radiation or current for skin treatments or brain stimulation respectively, will now be covered by the MDR.

Chapter I, Article 7, talks about the adoption of new “common specifications” which will apply alongside the Harmonized Standards for devices, “in respect of the general safety and performance requirements”. CS’s will be adopted where, “no harmonized standards exist or where relevant harmonized standards are not sufficient, or where there is a need to address public health concerns…”

UDI across the board

The European Unique Device Identification (UDI) System, Annex V, Part C, is a 9-page section within the new MDR, which goes into detail on UDI specifics. One excerpt states:
“3.1 A UDI shall be assigned to the device itself or its package…3.3. The UDI shall contain two parts: an UDI-DI and an UDI-PI.”

The “DI” is the “Device Identifier” and the “PI” is the ‘Production Identifier’. The information on the UDI will be used by the European Databank on Medical Devices (Eudamed) in order to, “enable unique identification and to facilitate traceability of devices”.

As such, all medical device labels must include this information, and now because of the extended scope for a ‘medical device’, many more manufacturers will need to consider these implications.

Post market surveillance, as defined in Chapter I, Article 2, (40a), requires the manufacturer to “proactively collect and review experience gained from their devices placed on the market.”

As a general obligation of the manufacturer, Chapter II, Article 8, states: “1b. Manufacturers shall conduct a clinical evaluation in accordance with the requirements set out in Article 49 and Annex XIII, including post-market clinical follow-up.”

Post-Market Clinical Follow-Up (PMCF) must be planned in, as the information gathered will be used to analyze the safety and performance of the device.

This, for most device classes, will now be reported annually to the authorities. (See Annex XIII, Part B, 2.2, of the MDR for what needs to be included in the plan.) Along with the aims of this system to reduce risks, unannounced audits are expected to become more common and frequent.

The rules on classification

In addition to certain products now being considered medical devices by the new MDR, some will also change classification with regards to class.

Chapter V, Classification and Conformity Assessment, details the classes and Annex VIII sets out the criteria. Some of the changes include surgical meshes, active implantable, some substances and certain software being categorized as class III.

Notably, other items to consider include a new “mechanism for scrutiny of conformity assessment” and a “person responsible for regulatory compliance”.

In regards to the above, the new MDR is due for formal issue in late 2016/early 2017 – manufacturers will be given three years (a transition period) for their medical devices to comply with the new requirements.

What About the New IVDR?

For this ‘category’ of product, manufacturers will have five years to comply with the new requirements. Without delving too deep into the specific changes for IVD’s, one of the biggest changes will be the percentage of products that will soon require certification by a notified body.

The BSI Group explains that the new risk classification in the IVDR will result in a “quantum leap” from products that could have been self-certified under the old directive to products soon needing notified body certification under the new regulation – See BSI’s diagram below. 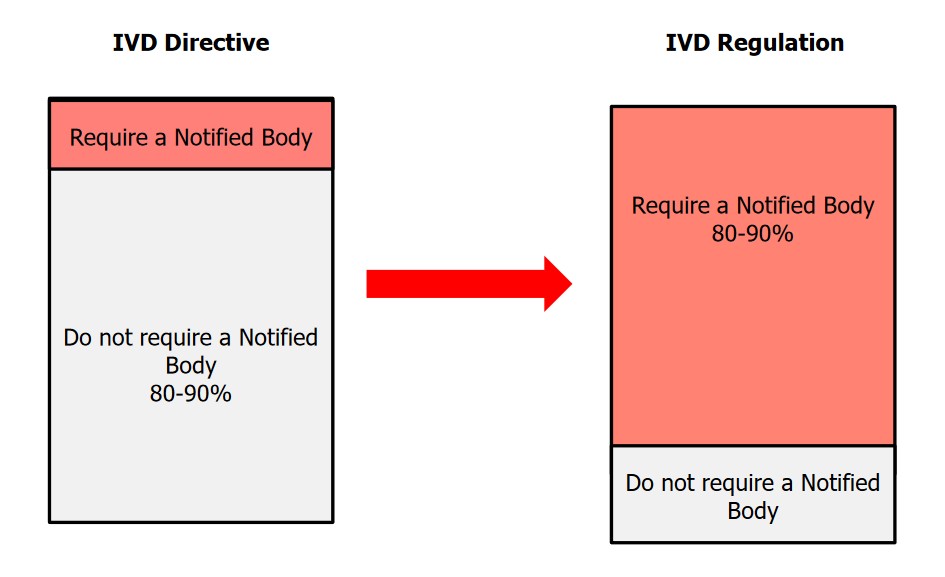 Both the new MDR and IVDR should improve product risk management and provide a more transparent supply chain but it is easy to see that these new regulations will have other, potentially huge, effects on device manufacturers and the Medical device/IVD industries as a whole.

In short, device manufacturers need to be prepared for the changes. TÜV SÜD, BSI Group and Emergo Group all provide expertise in this area and have recommended actions to take as potential next steps. This includes manufacturers of existing devices evaluating potential compliance issues via consultation with the notified bodies, identifying the required clinical data, training/obtaining staff for regulatory compliance, and developing a strategy and budget which considers iteration of existing products/operations along with implementation for new products in the future.

In addition to planning internal operational activities, companies need to consider what effects these changes have on identifying a fertile market for product launch. According to Epsicom, Europe accounts for around 28% of the Global Medical Device Market, the second largest slice of the pie next to the USA which has around 45%.

Currently, a large majority of European-based medical device manufacturers launch products at home in the EU via CE, with the intention of getting a few years under their belt first before making the jump over to the USA via FDA approval. Up until now, a good percentage of US-based medical device manufacturers have also taken the CE approach, obtaining approval overseas first, with initial clinical evaluation data from Europe being used to somewhat support clinical trial efforts later when stateside. The percentage of domestic launches in Europe may remain the same but will the strenuous changes swing Uncle Sam’s device manufacturers to more frequently choose home?

If we take a Viable Systems Model perspective we can appreciate how Ashby’s Law of Requisite Variety applies. There are changes coming to the environment in which medical devices manufactures operate, and in order to support existing and future CE marked devices, they will have to match the emergent complexities brought about by the new MDR and IVDR.

The changes will affect all medical device/IVD manufacturers who have an existing CE marked product or who have a product which was previously not considered a medical device but will be under the guidelines of the new MDR.

Launching a product in Europe may take longer than it did before and it’s likely that more products might now be rejected. Again, for small firms or medical device start-ups, having the capacity to correctly implement the necessary components for these changes may require external help and guidance.

This is where outsourcing manufacture can really come into its own – a contract service provider will not be the legal manufacturer but they should have registration (ISO 13485/9001, FDA GMP) for operating an approved and comprehensive Quality Management System. Most CM’s who cover the whole product life cycle will also be capable of assisting with the Technical File requirements for CE mark submission. Being able to utilize the regulatory knowledge possessed by the same organization undertaking the design/manufacture of the product can add a lot of value and save a lot of time.

And if you are wondering whether outsourcing is the right option for your medical or IVD device you might like to take our interactive quiz: The CEO’s guide to Outsourcing Medical Device Manufacturing.

Bos G & Vollebregt E (2015) “The Proposed EU Regulations for Medical and in vitro diagnostic devices; An overview of the likely outcomes for the next market”, available from: http://www.bsigroup.com/LocalFiles/EN-AU/ISO%2013485%20Medical%20Devices/Whitepapers/WP-EU-MedRegs-updated.pdf