Thirteen-year-old Madeline Yunker fell hard during a soccer match three years ago, striking her head on the turf with enough force to cause a concussion.

But Madeline seemed fine at the time and quickly returned to the field, falling a second time later that game. Her mother, Kristin Yunker, has since learned that when it comes to undiagnosed head injuries, “It’s not the first hit that can kill you. It’s the second.”

Madeline is one of more than 120,000 youth athletes who experience a sports-related head injury each year. With one of the Midwest’s largest concentrations of youth soccer players in metro Milwaukee, the University of Wisconsin-Milwaukee App Brewery and the Medical College of Wisconsin’s Brain Injury Research Program are working to get injured athletes out of the game and into treatment as quickly as possible. In early 2016, the partners launched the Symptom Tracking App for Concussions (S.T.A.C.), a free smartphone app that helps athletes, parents and coaches deal with head injuries. 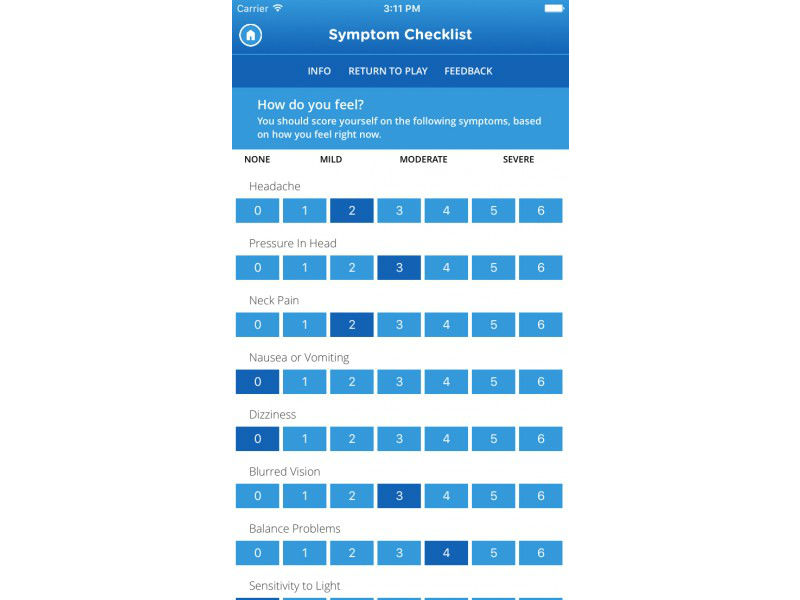 The free Symptom Tracking App for Concussions helps young athletes, their parents and their coaches track head-injury symptoms and compare them to baseline assessments.

The app was conceived by Medical College brain injury researcher Adam Pfaller, who called the need for such a tool “obvious.” Concussions can be hard to diagnose – symptoms may first appear hours or days later – and follow a sometimes unpredictable recovery pattern.

“There were no good apps on the market that track symptoms for an athlete who gets a concussion,” Pfaller said. “Plus, patients can have biased or poor recall.”

And though a recently passed state law requires concussion training for coaches and a printout of symptoms for parents, that information isn’t always readily available in the moments after an injury. S.T.A.C. changes that with an easy-to-use checklist of concussion symptoms.

“A card is easy to misplace, but we all have our cellphones in hand,” said Jennifer Hill, who manages the Brain Injury Research Program.

Coaches with the Milwaukee Kickers, one of the state’s largest soccer clubs, are trained to recognize concussion symptoms, said Jock Mutschler, a coach for the organization. But coaches are not experts, nor are the parents who receive the printed handout about head injuries. Few clubs or schools have a professional trainer on hand at every game.

“This app would be ideal for the Kickers,” Mutschler said. “The vast majority of the coaches are parents, and while these parent-coaches have been exposed to basic concussion protocol, they haven’t necessarily gone through the extensive training that a paid coach might have.”

Four years after her daughter’s complete but lengthy recovery from post-concussion syndrome, Kristin Yunker agreed. “If you have a cast on your arm, the coach or parent isn’t going to say, ‘Come on, you’ve got to get back in the game.’ But I’ve seen it with head injuries.”

Along with convenience, S.T.A.C. offers multiple advantages over a paper handout. It can store an individual player’s baseline or preinjury status, giving parents and coaches a benchmark they can use to evaluate a player’s neurological health in the “gray area” moments after a head injury occurs. Here’s how it works: A sports club or affiliated medical group performs individual baseline tests in the preseason. For example, if a player’s baseline headache or nausea level is normally a self-reported “1,” but it spikes to “6” after a collision with another athlete during the homecoming football game, a coach can take action.

“He can pull the player immediately and get him to a hospital to begin the concussion protocol,” explains Dustin Hahn, a girls softball coach and project manager at the App Brewery.

Players and parents also can track their post-injury symptoms in the app, an aid in making accurate reports to health care providers during the recovery process. That’s a big improvement over the typical response of an injured teenage athlete several days post-injury, which Pfaller generalized as something like: “Uh, um, uh, I didn’t feel very good.”

Hahn has young, baseline-tested athletes at home, a daughter who plays softball and a son who plays soccer. He’s convinced S.T.A.C. was the right project for UW-Milwaukee’s App Brewery, where all projects assigned to student developers must fit the Wisconsin Idea — the University of Wisconsin System philosophy that research should solve problems and improve health, quality of life, the environment and agriculture for all citizens of the state.

“The first questions we asked were whether the project aligned with UW-Milwaukee’s mission and whether our students could handle it,” Hahn said. “The answer was clearly ‘yes’ on both counts.”