Researchers from Valencia and the Basque Country have developed a new method to detect cocaine and mycoplasma at very low concentrations. It has been designed as an alternative for use in laboratories and is potentially more competitive than existing analysis methods.

The method combines the use of gated mesoporous silica nanoparticles and SERS spectroscopy, a signal amplification system that uses gold nanoparticles to detect very low concentrations of the substances being analyzed. In the lab, it allowed them to reach nanomolar detection levels for cocaine and 30 copies of genomic DNA/μL in the case of mycoplasma. 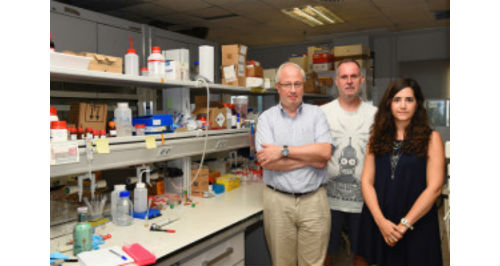 Developed by researchers at the Universitat Politècnica de València (UPV), CICbiomaGUNE and CIBER-BBN, of the Carlos III Health Institute, the study has been published in Chemistry-A European Journal with the title, “Surface Enhanced Raman Scattering and Gated Materials for Sensing Applications.” In it they outline the need to detect these two substances:

“Cocaine is an alkaloid obtained from the leaves of the coca plant, which is extensively used in developed countries as an illegal recreational drug. Although cocaine production and distribution are restricted and illegal in most contexts, it is a powerful nervous system stimulant that causes strong addiction among consumers, frequently leading to serious health as well as social and legal problems.”

“Mycoplasma refers to a genome of prokaryotic microorganisms that have been described as parasites of various animals and plants. In addition, their characteristic lack of a cell wall confers them resistance to many common antibiotics so they are often present in research laboratories as cell-culture contaminants. Hence, detection of these microorganisms is of general interest in biomedical and life sciences.”

The new detection system is based on the release of a dye that is easily identifiable by SERS spectroscopy from inside the silica nanoparticles, provided the substance being detected is present. “In the presence of mycoplasma or cocaine, the pores of the nanoparticles unblock, letting in the dye that interacts with gold nanotriangle, It is this interaction that is detected by SERS spectroscopy. The concentration of the substance being detected is proportional to the signal detected,” explains Ramón Martínez Máñez, director of the Inter-university Research Institute for Molecular Recognition and Technological Development and scientific director of CIBER-BBN.

“Never before has SERS spectroscopy been combined with gated mesoporous silica materials for this kind of tests. The results obtained so far are very positive and point to the possibility of this method being used in the detection of other pathogens,” Luis M. Liz-Marzán of the Basque Centre for Cooperative Research in Biomaterials added.