A newly developed method for detecting glucose based on how it absorbs a specific type of light could spell the end of the painful, invasive finger-prick tests diabetics rely on to monitor their condition, according to a Texas A&M University biomedical engineer who is developing the technology.

Using optical technology that essentially sends a twisting, directional type of light at a glucose-containing sample, a team of researchers led by Vladislav Yakovlev, professor in Texas A&M’s Department of Biomedical Engineering, has been able to accurately detect glucose concentrations by measuring how glucose absorbs this light at a molecular level. His findings may translate into a more effective means of diabetes management for the millions suffering from the disease.

The research, which was spearheaded by undergraduate student Carlos Tovar, under the guidance of Yakovlev and graduate students Brett Hokr and Zhaokai Meng, was presented at this year’s SPIE Photonics West conference. 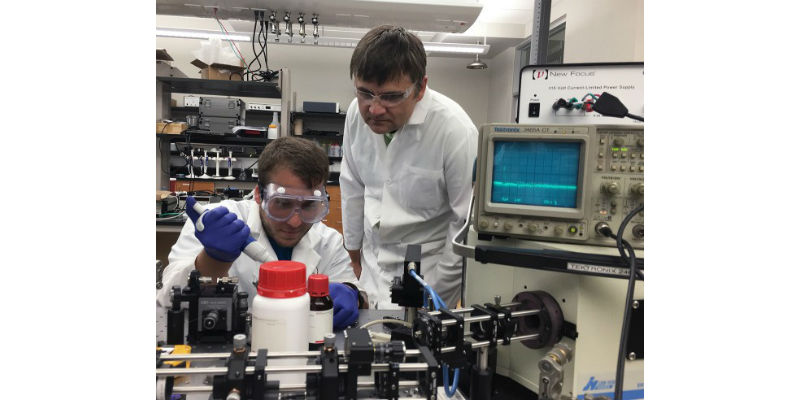 Authorities on biophotonics, nanophotonics and biomedical optics from throughout the world convene annually at the high-tech conference to discuss their cutting-edge work. Each year, the conference attracts more than 20,000 people who want to see, learn about and purchase the latest devices, components and systems that are driving trends such as state-of-the art medical technologies, smart manufacturing and autonomous vehicles.

Yakovlev, an authority on biomedical diagnostics and imaging instrumentation, says standard glucose-monitoring techniques such as finger-prick methods are somewhat of a guessing game because they cannot achieve continuous monitoring of a patient’s blood-glucose levels.

What’s more, patients are advised to self-administer these tests at least three times a day, but because of the painful and awkward nature of the tests many people don’t comply with this instruction, he notes.

The result is inadequate and, at times, ineffective management of the disease, he says, and it’s a growing problem given that diabetes is reaching epidemic levels. In the United States alone, the disease affects 29.1 million people and is the seventh-leading cause of death. Sobering statistics such as these, Yakovlev notes, demonstrate a clear need for a noninvasive, pain-free and accurate technique to monitor blood-glucose levels.

That need could be answered by the optical detection technology being developed by Yakovlev and his team at Texas A&M. Though it’s still in its infancy, this technology might one day be implemented in devices such as smart watches and bracelets where it would provide patients with hassle-free, continuous monitoring and alerts when their blood-glucose levels slip to dangerous levels. For now, the technology is being refined in the laboratory with the hopes of one day moving to human trials if results continue to be positive, Yakovlev says.

The technology basically works by measuring how individual glucose molecules absorb a specific wavelength of light that is characterized as right and left circular polarized, Yakovlev explains.

It’s a small but measurable effect, he says, that is due to a geometric property of the glucose molecule known as chirality. Glucose’s chiral structure, which is a result of its arrangement of atoms, means that its molecule cannot be superimposed over its mirror image.

For non-engineers that concept may be difficult to imagine, but think of a pair of shoes. The left shoe is a mirror image of the right shoe, but they are not interchangeable. That same property exists for certain molecules such as glucose, and it results in the molecule absorbing light in a specific way, Yakovlev explains.

This specificity, he notes, enables him to discriminate glucose molecules from other surrounding biological molecules – something that historically has proven difficult with other detection approaches. For example, Yakovlev explains, the large presence of water in tissue has typically created a problem when it comes to attempting to detect glucose with optical technology because water also absorbs light and in doing so masks the presence of glucose.

In addition, protein molecules can appear similar, necessitating the factoring in of additional variables into detection technology in order to obtain reliable data.

These issues are known as calibration problems, he says. However, Yakovlev’s technology overcomes these obstacles by reaching the proper penetration depths and producing a unique, measurable effect that, in a sense, removes the background noise from the picture, leaving behind the glucose signal.

“This technology has the potential to separate the presence of glucose from its surroundings, avoiding the calibration problem while circumventing the huge absorption of water in the fundamental vibrational region of the spectrum, allowing for clinically relevant penetration depths in biological tissue,” Yakovlev says.