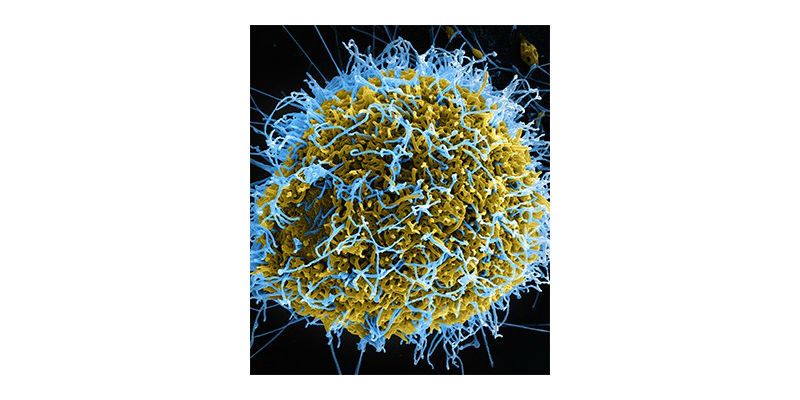 A new test developed at Washington University School of Medicine in St. Louis can detect virtually any virus that infects people and animals, including the Ebola virus (above). (Credit: National Institute of Allergy and Infectious Diseases)

A new test detects virtually any virus that infects people and animals, according to research at Washington University School of Medicine in St. Louis, where the technology was developed.

Many thousands of viruses are known to cause illness in people and animals, and making a diagnosis can be an exhaustive exercise, at times requiring a battery of different tests. That’s because current tests aren’t sensitive enough to detect low levels of viral bugs or are limited to detecting only those viruses suspected of being responsible for a patient’s illness.

“With this test, you don’t have to know what you’re looking for,” said the study’s senior author, Gregory Storch, MD, the Ruth L. Siteman Professor of Pediatrics. “It casts a broad net and can efficiently detect viruses that are present at very low levels. We think the test will be especially useful in situations where a diagnosis remains elusive after standard testing or in situations in which the cause of a disease outbreak is unknown.”

Results published online in September in the journal Genome Research demonstrate that in patient samples the new test – called ViroCap – can detect viruses not found by standard testing based on genome sequencing. The new test could be used to detect outbreaks of deadly viruses such as Ebola, Marburg and severe acute respiratory syndrome (SARS), as well as more routine viruses, including rotavirus and norovirus, both of which cause severe gastrointestinal infections.

The test sequences and detects viruses in patient samples and is just as sensitive as the gold-standard polymerase chain reaction (PCR) assays, which are used widely in clinical laboratories. However, even the most expansive PCR assays can only screen for up to about 20 similar viruses at the same time.

The Washington University researchers are making the technology they developed publicly available to scientists and clinicians worldwide, for the benefit of patients and research.

The researchers evaluated the new test in two sets of biological samples – for example, from blood, stool and nasal secretions – from patients at St. Louis Children’s Hospital. In the first, standard testing that relied on genome sequencing had detected viruses in 10 of 14 patients. But the new test found viruses in the four children that earlier testing had missed. Standard testing failed to detect common, everyday viruses: influenza B, a cause of seasonal flu; parechovirus, a mild gastrointestinal and respiratory virus; herpes virus 1, responsible for cold sores in the mouth; and varicella-zoster virus, which causes chickenpox.

In a second group of children with unexplained fevers, standard testing had detected 11 viruses in the eight children evaluated. But the new test found another seven, including a respiratory virus called human adenovirus B type 3A, which usually is harmless but can cause severe infections in some patients.

In all, the number of viruses detected in the two patient groups jumped to 32 from 21, a 52 percent increase.

“The test is so sensitive that it also detects variant strains of viruses that are closely related genetically,” said corresponding author Todd Wylie, an instructor of pediatrics. “Slight genetic variations among viruses often can’t be distinguished by currently available tests and complicate physicians’ ability to detect all variants with one test.”

In addition, because the test includes detailed genetic information about various strains of particular viruses, subtypes can be identified easily. For example, the study showed that while standard testing identified a virus as influenza A, which causes seasonal flu, the new test indicated that the virus was a particularly harsh subtype called H3N2.

Last flu season, H3N2 contributed to some 36,000 deaths in the United States. And in some patients – particularly young children, older adults and people with weakened immune systems – knowing that the H3N2 strain is present may alter treatment.

To develop the test, the researchers targeted unique stretches of DNA or RNA from every known group of viruses that infects humans and animals. In all, the research team included 2 million unique stretches of genetic material from viruses in the test. These stretches of material are used as probes to pluck out viruses in patient samples that are a genetic match. The matched viral material then is analyzed using high-throughput genetic sequencing. As completely novel viruses are discovered, their genetic material could easily be added to the test, Storch said.

The researchers plan to conduct additional research to validate the accuracy of the test, so it could be several years before it is clinically available.

“It also may be possible to modify the test so that it could be used to detect pathogens other than viruses, including bacteria, fungi and other microbes, as well as genes that would indicate the pathogen is resistant to treatment with antibiotics or other drugs,” said co-author Kristine Wylie, PhD, assistant professor of pediatrics.

In the meantime, the technology can be used by scientists to study viruses in a research setting. Kristine Wylie investigates the viruses that set up residence in and on the human body, collectively known as the virome. The new test will provide a way to capture the full breadth and depth of such viruses, and deepen understanding of how they play a role in keeping the body healthy.