When you get sick, you want the right treatment fast. But certain infectious microbes are experts at evading the very anti-bacterial drugs designed to fight them.

A simple and inexpensive new test developed by researchers at the University of California, Berkeley, can diagnose patients with antibiotic-resistant strains of bacteria in a matter of minutes. The technique could help doctors prescribe the right class of antibiotics for each infection, and could help limit the spread of antibiotic-resistant “superbugs” that kill as many as 700,000 people worldwide each year.

“Health organizations around the world are supporting the development of tools that specifically identify pathogens that are resistant to antibiotics because there are limited tests available that can do it quickly,” says Tara deBoer, a postdoctoral fellow in the College of Engineering at UC Berkeley. “Our test is simple and gives us information on a short timescale.”

The test, dubbed DETECT, spots the molecular signatures of antibiotic-resistant bacteria directly in urine samples. Unlike other techniques that are currently on the market, DETECT does not require expensive instrumentation and is simple enough to be applied in a point-of-care setting. 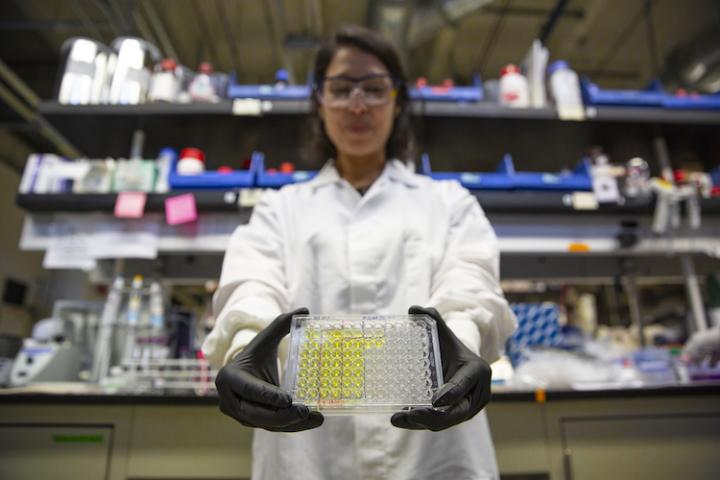 Tara deBoer holds a well-plate of synthetic urine samples that have been added to the DETECT solution. The solution turns yellow when antibiotic-resistant bacteria are present. (Image credit: Stphen McNally photo)

“In theory, DETECT will allow you to diagnose antibiotic-resistant bacterial infections in a doctor’s office just by collecting urine and mixing it with the DETECT reagents,” says Niren Murthy, a professor of engineering at Berkeley.

“Drug-resistant infections are a silent pandemic that actually kill more people every year than Zika or Ebola,” says Lee Riley, professor of epidemiology and infectious diseases in the School of Public Health at UC Berkeley. “The faster you can start the right drug, the better the chances of survival or avoiding complications.”

The study, which was conducted as part of the Consortium for Research on Antimicrobial Resistant Bacteria (CRARB) that includes Berkeley researchers in the College of Engineering and the School of Public Health, appears in the journal ChemBioChem.

Many common early-generation antibiotics, including penicillin, amoxicillin and ampicillin, are based around a molecular structure called beta-lactam that blocks bacteria from building cell walls, making it impossible for microbes to grow and reproduce.

However, as use of these antibiotics has soared over the past 80 years, certain infectious bacteria including strains of E. coli, Salmonella, and Shigella, have evolved to produce enzymes that chop up these antibiotics, called beta-lactamases, and rendering them useless.

DETECT works by identifying the presence of beta-lactamases in urine samples.

“What our technology does is detect the molecules that are actually breaking down the antibiotics,” deBoer says.

While the basic technique for detecting beta-lactamases has already been developed, it is not sensitive enough to spot the relatively small concentrations of beta-lactamases in patient samples. For this technique to work, bacteria from a patient sample must first be cultured in a lab, which can take two to three days — long enough for a simple bacterial infection like a urinary tract infection to invade the kidneys or the blood.

The DETECT technique uses an enzymatic chain reaction to boost the signal from beta-lactamases by a factor of 40,000, high enough to allow detection of the presence of these enzymes in urine samples. With DETECT, a patient who tests positive for an infection that is resistant to early-generation antibiotics can immediately be treated with a more powerful antibiotic or alternative agent.

The team tested DETECT on 40 urine samples collected from patients suspected of having a urinary tract infection, and found that approximately one-quarter of them had antibiotic-resistant infections.

“DETECT tells you not only who has antibiotic-resistant infections but also tells you who could be treated by early-generation antibiotics, allowing you to spare higher-end antibiotics and slow the spread of drug resistance,” Murthy says.

“Everybody has different needs in the hospital,” deBoer says. “Right now we have a lot of designs, but what we are doing is allowing the intended use to define what the design is going to look like.”

For example, diagnostic tools that work well in an out-patient clinic may not be as convenient for doctors working in an emergency department, deBoer says.

With the help of UC Berkeley’s start-up incubator CITRIS Foundry, deBoer has co-founded a company, BioAmp Diagnostics, which is working to commercialize the technology into a rapid diagnostic device.

The team is continuing to perfect its enzyme signal-amplification technique in hopes of soon being able to apply it to detect specific strains of bacteria as well as bacteria in the blood.

“I think we are on the verge of having this applicable in a hospital setting,” Riley says.