Government and other scientists are proposing a new way to define Alzheimer’s disease — basing it on biological signs, such as brain changes, rather than memory loss and other symptoms of dementia that are used today.

The move is aimed at improving research, by using more objective criteria like brain scans to pick patients for studies and enroll them sooner in the course of their illness, when treatments may have more chance to help.

But it’s too soon to use these scans and other tests in routine care, because they haven’t been validated for that yet, experts stress. For now, doctors will still rely on the tools they’ve long used to evaluate thinking skills to diagnose most cases.

Regardless of what tests are used to make the diagnosis, the new definition will have a startling effect: Many more people will be considered to have Alzheimer’s, because the biological signs can show up 15 to 20 years before symptoms do.

“The numbers will increase dramatically,” said Dr. Clifford R. Jack Jr., a Mayo Clinic brain imaging specialist. “There are a lot more cognitively normal people who have the pathology in the brain who will now be counted as having Alzheimer’s disease.”

About 50 million people worldwide have dementia, and Alzheimer’s is the most common form. In the U.S., about 5.7 million have Alzheimer’s under its current definition, which is based on memory problems and other symptoms. About one-third of people over 70 who show no thinking problems actually have brain signs that suggest Alzheimer’s, Jack said. 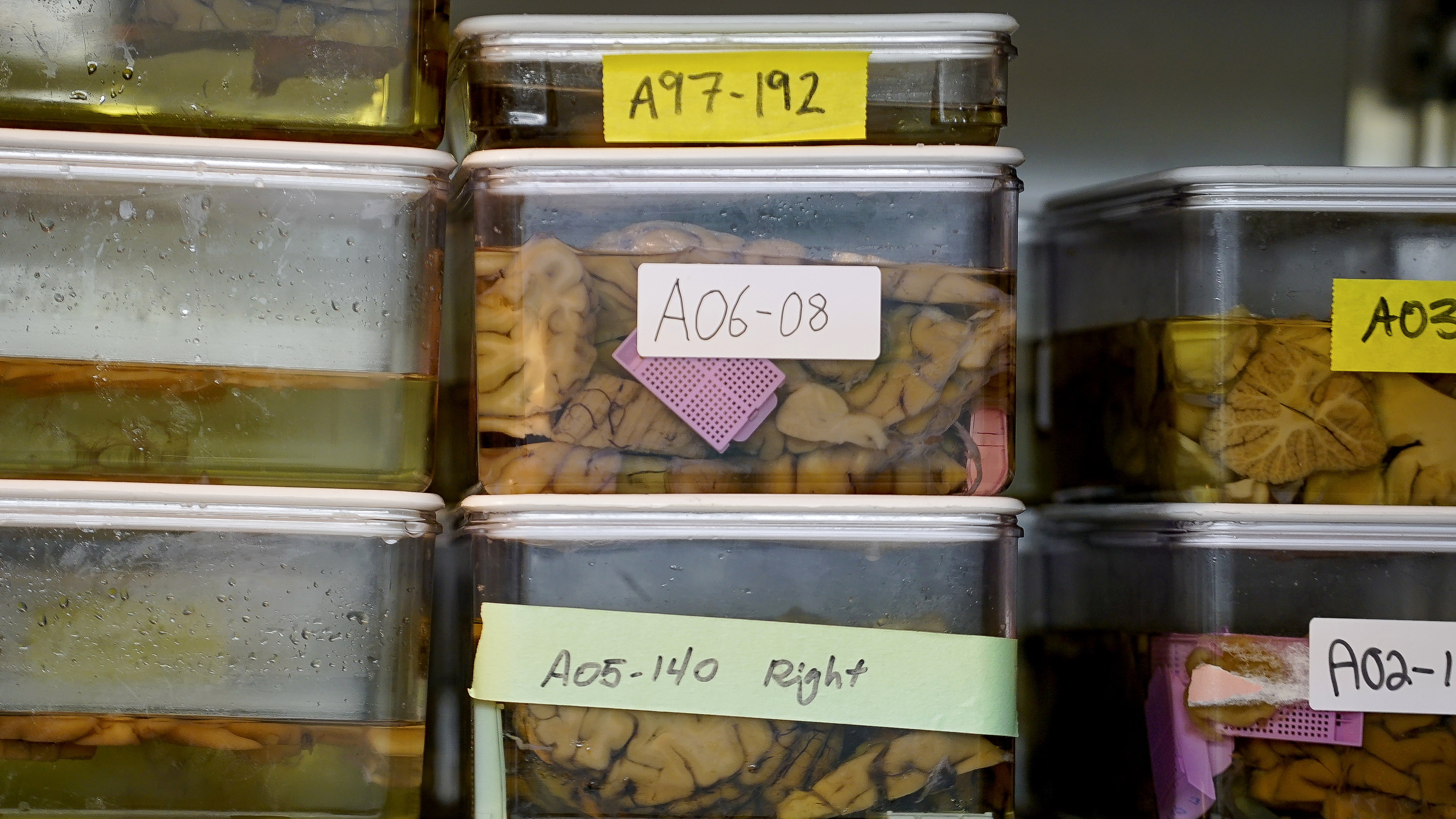 This Feb. 16, 2018, photo shows slices of human brains researchers at Northwestern University are using to study Alzheimer’s disease in Chicago. Scientists are proposing a new way to define Alzheimer’s disease, basing it on biological signs such as brain changes, rather than memory loss and other symptoms of dementia that are used now. (AP Photo/Teresa Crawford)

There is no cure — current medicines such as Aricept and Namenda just temporarily ease symptoms. Dozens of hoped-for treatments have failed, and doctors think one reason may be that the studies enrolled patients after too much brain damage had already occurred.

“By the time that you have the diagnosis of the disease, it’s very late,” said Dr. Eliezer Masliah, neuroscience chief at the Institute on Aging.

Another problem: as many as 30 percent of people enrolled in Alzheimer’s studies based on symptoms didn’t actually have the disease — they had other forms of dementia or even other medical conditions. That doesn’t give an accurate picture of whether a potential treatment might help, and the new definition aims to improve patient selection by using brain scans and other tests.

Many other diseases, such as diabetes, already are defined by measuring a biomarker, an objective indicator such as blood sugar. That wasn’t possible for Alzheimer’s disease until a few years ago, when brain scans and spinal fluid tests were developed to do this.

They measure certain forms of two proteins — amyloid and tau — that form plaques and tangles in the brain — and signs of nerve injury, degeneration and brain shrinkage. 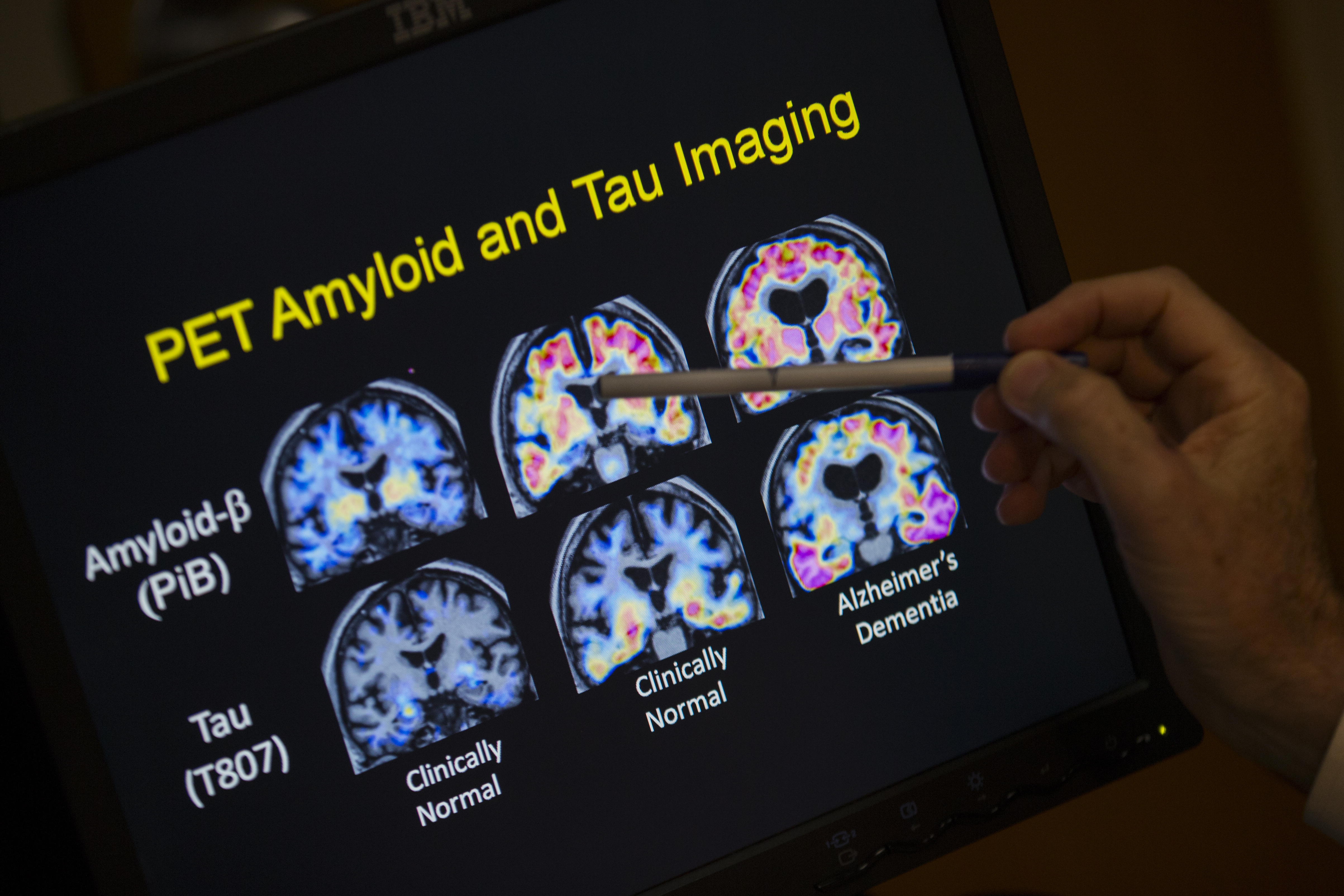 In this May 19, 2015, file photo, R. Scott Turner, Professor of Neurology and Director of the Memory Disorder Center at Georgetown University Hospital, points to PET scan results that are part of a study on Alzheimer’s disease at Georgetown University Hospital in Washington. Government and other scientists are proposing a new way to define Alzheimer’s disease. basing it on biological signs, such as brain changes, rather than memory loss and other symptoms of dementia that are used now. (AP Photo/Evan Vucci, File)

The guidelines spell out use of these biomarkers over a spectrum of mental decline, starting with early brain changes, through mild impairment and Alzheimer’s dementia.

People may be worried and want these tests for themselves or a family member now, but Jack advises: “Don’t bother. There’s no proven treatment yet.”

You might find a doctor willing to order them, but spinal fluid tests are somewhat invasive, and brain scans can cost up to $6,000. Insurance usually does not pay because they’re considered experimental outside of research. A large study is underway now to see whether Medicare should cover them and when.

Anyone with symptoms or family history of dementia, or even healthy people concerned about the risk can consider enrolling in one of the many studies underway.

“We need more people in this pre-symptomatic stage” to see if treatments can help stave off decline, Masliah said.