Learning how to look inside a body without having to cut it open is still an important part of medical research. One of the great challenges in imaging remains the visualization of oxygen in tissue. A team led by Prof. Vasilis Ntziachristos, Chair for Biological Imaging at the Technical University of Munich (TUM) and Director of the Institute for Biological and Medical Imaging at the Helmholtz Zentrum München , has developed a new approach to this task.

Imaging of tissue oxygenation is not straightforward; different techniques have been considered but each of them has their shortcomings. In recent years, research in this field has focused on optoacoustic methods. These, especially Multispectral optoacoustic tomography (MSOT), form one of the key areas of Vasilis Ntziachristos’ research. 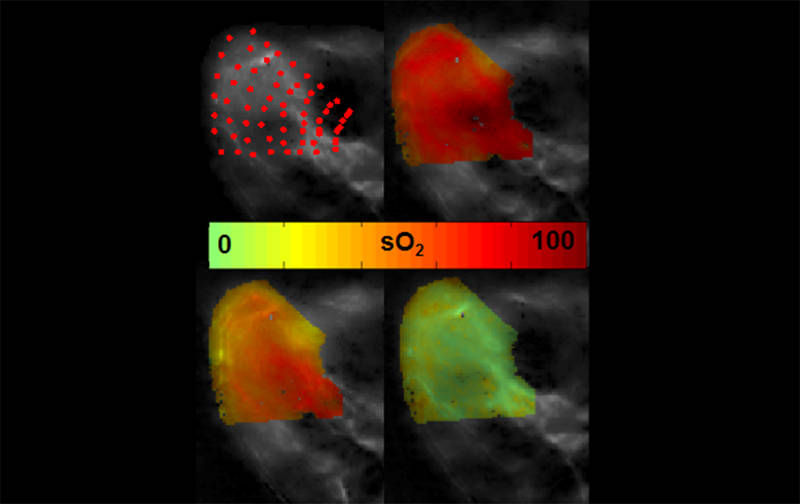 Put in simple terms, MSOT turns light into sound and then into visual information: First, a weak pulsed laser beam is directed at tissue. Absorbing molecules and cells respond with a minuscule vibration, which, in turn, creates sound signals. The sound signals are then picked up by sound sensors and translated into images. The way molecules and cells react to the laser beam offers insight into their optical and thus into their biochemical properties.

Complex tissue is an obstacle to optoacoustic imaging

While MSOT can, in theory, be used to tell how much oxygen can be found in blood, there is one major obstacle: The intensity of light changes with depth, not only because light has been filtered through all the tissue layers that it passed through, but also because different tissue structures may have different properties that affect how light is scattered and absorbed. In the past, there have been several attempts to solve this problem by calculating how the tissue will affect the propagation of light. “However, due to the high optical complexity of tissues, this approach so far could not be flexibly applied in optoacoustic images of tissues of living subjects,” says Stratis Tzoumas, first author of a study published in Nature Communications, in which the scientists describe their new method.

A new description of light distribution in tissue

Ntziachristos, Tzoumas, and their colleagues came up with a completely different approach. Instead of describing the spatial distribution of light, their imaging method eMSOT – the e stands for “eigenspectra” – avoids simulating the path of light through complex tissue altogether. Instead the new method is based on the discovery that the spectrum of light propagating in tissue can be described by using a small number of basic spectra. eMSOT uses data from a conventional MSOT-device combined with a new algorithm that is based on this novel way of describing the light spectrum to correct for the effects of light propagation in tissue and obtain accurate images of blood oxygenation in tissue.

With eMSOT, the scientists were able to visualize the blood oxygenation level of living tissue up to one centimeter below the skin surface. “Theoretically, the imaging depth can be extended to more than that,” says Stratis Tzoumas. “There is, however, a limit at about three because at some point, light cannot penetrate the tissue any further.” The scientists observed a vastly improved accuracy in eMSOT over previous optical and optoacoustic approaches. Apart from being non-invasive and radiation-free, eMSOT also delivers comparable or higher resolution both spatially and temporally, than other optical imaging methods. “Information about the amount of oxygen in tissue is important when it comes to various fields in research and treatment – for example tumor growth or in measurements of metabolism” says Vasilis Ntziachristos. “It may be that eMSOT becomes the gold standard method, once it is ready for clinical use.”