Researchers at the University of Washington (UW) have used a noninvasive light-based imaging technology to literally see inside the living brain, providing a new tool to study how diseases like dementia, Alzheimer’s, and brain tumors change brain tissue over time.

The work is reported by Woo June Choi and Ruikang Wang of the UW Department of Bioengineering, today in the Journal of Biomedical Optics, published by SPIE, the international society for optics and photonics.

“The paper shows significantly enhanced imaging depth using a noninvasive laser-enabled technique for deep tissue imaging. In the brain, the imaging depth is almost doubled,” said journal editorial board member Martin Leahy of the National University of Ireland, Galway. “The authors demonstrate for the first time an application in which this capability opens up a whole new window into the live intact hippocampus, for discovery in brain research.”

From the experimental findings, the authors envision that this new optical coherence tomography (OCT) approach to brain study may enable examination of acute and chronic morphological or functional vascular changes in the deep brain, which has been rarely attempted before in the OCT community. 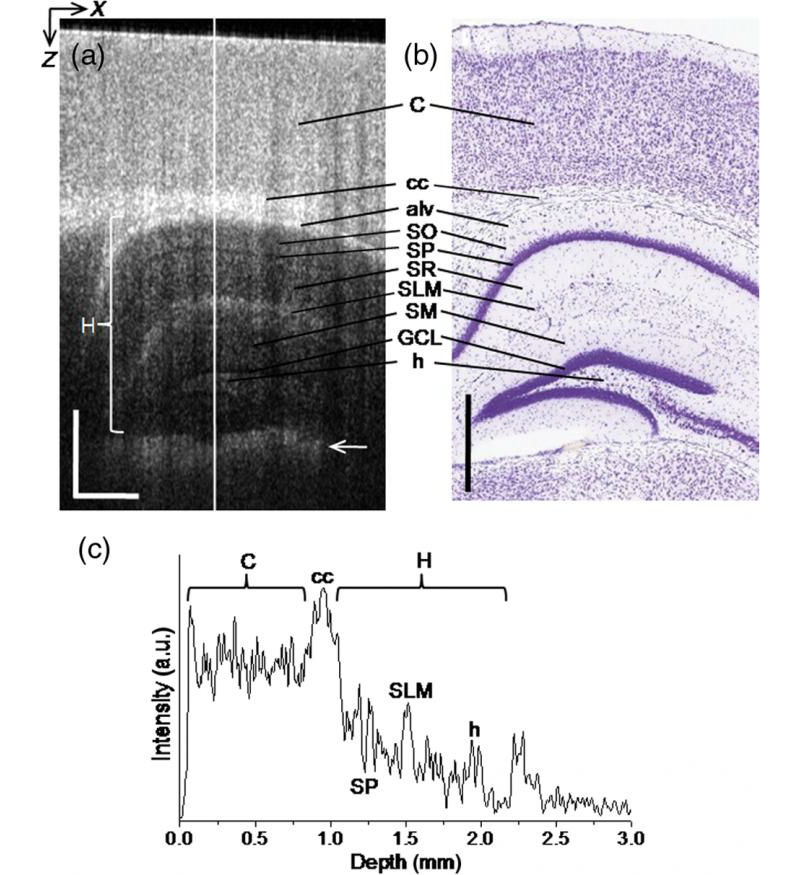 Choi and Wang used swept-source OCT (SS-OCT) powered by a vertical-cavity surface-emitting laser (VCSEL). In “Swept-source OCT powered by a 1.3μm vertical cavity surface emitting laser enables 2.3 mm-deep brain imaging in mice in vivo,” they describe how this technique could allow researchers to monitor morphological changes caused by diseases such as Alzheimer’s disease and dementia, and even to study the effects of aging on the brain.

The authors suggest that refining a VCSEL SS-OCT system may make it possible to do things that have been barely attempted in the OCT community, such as full-length imaging of a human eye from cornea to retina.

OCT is used to obtain sub-surface images of biological tissue at about the same resolution as a low-power microscope. An OCT camera can instantly deliver cross-section images of layers of tissue without invasive surgery or ionizing radiation.

Widely applied over the past two decades in clinical ophthalmology, it recently has been adapted for brain imaging in small animal models. Scientists have used OCT imaging to study the structure, neural activity, and blood flow in the cerebral cortex of live mice. Its application in neuroscience has been limited, however, because conventional OCT technology hasn’t been able to image more than 1 millimeter below the surface of biological tissue.

OCT images are based on reflected light directly reflected at sub-surface. At depths greater than 1 mm, the proportion of light (ballistic photons) that escapes without scattering became too small to be detected, so conventional OCT systems have not been able to image deeper tissues such as the hippocampus, where many pathologies originate.

Recently, swept-source OCT powered by VCSELs has been developed, dramatically improving the usable imaging range because of its markedly improved system sensitivity. This new system offers a constant signal sensitivity to greater depths in tissue, extending the imaging range to more than 2 millimeters.