For Dorkas Kaya and other young patients with HIV, seeing the walls of their residential treatment facility transformed with broad splashes of color and graffiti-like scribbles brought a singular reaction: “Whoa!”

“We were all like ‘whoa,’ yelling, ’cause it’s so different,” says Kaya, a 19-year-old who has been in the center for three years. “I like the colors. It brings life to the place.”

The nonprofit RxArt’s simple mission is to help children heal through the power of art by taking their mind off their surroundings, even for just a little while. They’ve brought in an impressive roster of artists to pediatric wards across the country to create original works on walls, ceilings, floors, even medical equipment. 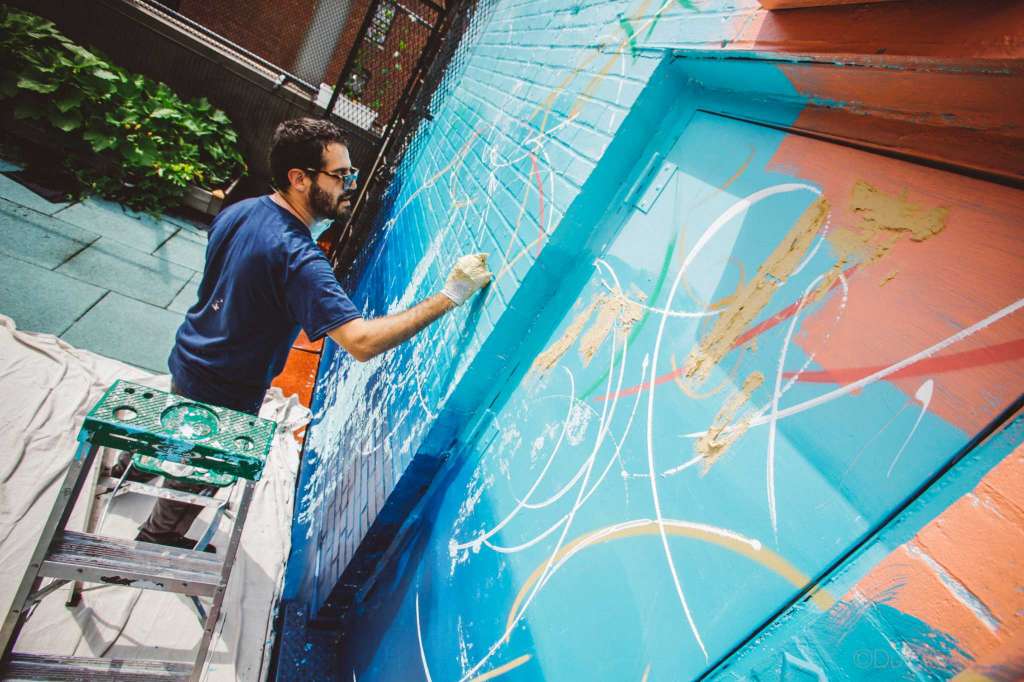 Artist Jose Parla paints a mural at the Incarnation Children’s Center in New York. (Duffy Higgins/Courtesy of Kiehl’s via AP)

In fact, former art dealer Diane Brown founded RxArt 15 years ago out of her own claustrophobia of CAT scan machines.

“I was having a CAT scan and I was terrified,” she recalls. Her only escape was using her imagination to think about a painting by one of her favorite artists, Matthew Ritchie.

When the test was over, she realized she had hardly been aware of it. She decided, “I’d like to do this for other people, but in case they didn’t have my imagination or background, I would have to be more concrete.”

RxArt has since worked with such artists as Jeff Koons at Advocate Children’s Hospital in Oak Lawn, Illinois; Kenny Scharf at Kings County Hospital Center in Brooklyn; Urs Fischer at the Cedar-Sinai Maxine Dunitz Children’s Health Center in Los Angeles; and John Monti at Children’s Hospital Boston. Thirty-two projects are complete. Seven more are in the pipeline.

“Having the monkey faces on the scanner … feels more like this would be like an amusement park ride, something that’s a fun experience, not something to be frightened of,” the celebrated pop artist says in a RxArt video of his project created in 2010.

Brooklyn artist Parla, whose exuberant works hang in One World Trade Center and the Brooklyn Academy of Music, created a mural in the rooftop garden of the 21-bed Incarnation center in upper Manhattan.

“It’s a free-flowing piece” with positive words over it such as “incarnation” and “love,” says Parla, who also decorated rooms with specially designed wallpaper with his signature graffiti-like motifs.

A recent $1 million grant from the Gerard B. Lambert Foundation has allowed RxArt to secure artists for more ambitious projects and expand to more cities.

There is no cost to the institutions, and while the artists are offered $10,000 honorariums, Brown said it’s insignificant when compared with what they can make in their studios.

Simkins, who lives in North Augusta, South Carolina, says Pruitt’s work, made of shimmering mirrored discs the children can touch, “gives the kids something to think about besides their condition. Something cheerful … affects your spirit, demeanor and how you start the day.”

RxArt is in the midst of designing studies to assess whether visual art can also help children heal. Some past medical research has suggested that pleasant environmental stimuli, like natural sunlight and music, might affect patient well-being or help motivate health care workers to deliver better care, though there isn’t evidence yet of a strong correlation.

“A positive and comforting environment can have a major impact on patients’ experiences,” says Dr. Barry Coller, physician-in-chief at Rockefeller University Hospital. “This is especially true for pediatric patients who are a particularly vulnerable population.”