A team of researchers from the University of North Carolina at Chapel Hill and NC State University has received a $5.3 million, five-year Transformative Research (R01) Award from the National Institutes of Health (NIH) to create fully functioning versions of the human gut that fit on a chip the size of a dime.

Such “organs-on-a-chip” have become vital for biomedical research, as researchers seek alternatives to animal models for drug discovery and testing. The new grant will fund a technology that represents a major step forward for the field, overcoming limitations that have mired other efforts.

The technology will use primary cells derived directly from human biopsies, which are known to provide more relevant results than the immortalized cell lines used in current approaches. In addition, the device will sculpt these cells into the sophisticated architecture of the gut, rather than the disorganized ball of cells that are created in other miniature organ systems. 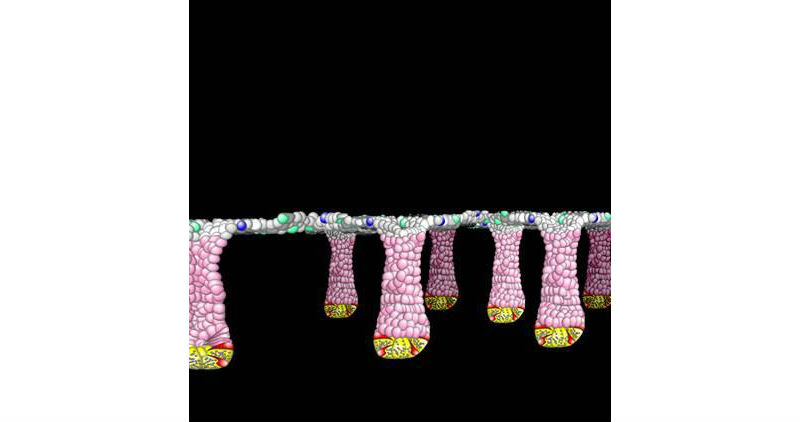 This is a picture of a schematic of colonic epithelial tissue. Crypt units are pointed down, flat surface faces center of the gut tube. Stem cells are red, progenitor cells are pink, differentiated cells are grey, blue and green. Yellow cells are stem cell niche cells. Lumenal surface is above crypts. (Credit: Scott Magness, PhD, UNC School of Medicine)

“We are building a device that goes far beyond the organ-on-a-chip,” said Nancy L. Allbritton, MD, PhD, professor and chair of the UNC-NC State joint department of biomedical engineering and one of four principle investigators on the NIH grant. “We call it a ‘simulacrum,’ a term used in science fiction to describe a duplicate. The idea is to create something that is indistinguishable from your own gut.”

The impetus for the “organ-on-chip” movement comes largely from the failings of the pharmaceutical industry. For just a single drug to go through the discovery, testing, and approval process can take as many as 15 years and as much as $5 billion dollars. Animal models are expensive to work with and often don’t respond to drugs and diseases the same way humans do. Human cells grown in flat sheets on Petri dishes are also a poor proxy. Three-dimensional “organoids” are an improvement, but these hollow balls are made of a mishmash of cells that doesn’t accurately mimic the structure and function of the real organ.

Basically, the human gut is a 30-foot long hollow tube made up of a continuous single-layer of specialized cells. Regenerative stem cells reside deep inside millions of small pits or “crypts” along the tube, and mature differentiated cells are linked to the pits and live further out toward the surface. The gut also contains trillions of microbes, which are estimated to outnumber human cells by ten to one. These diverse microbial communities — collectively known as the microbiota — process toxins and pharmaceuticals, stimulate immunity, and even release hormones to impact behavior. 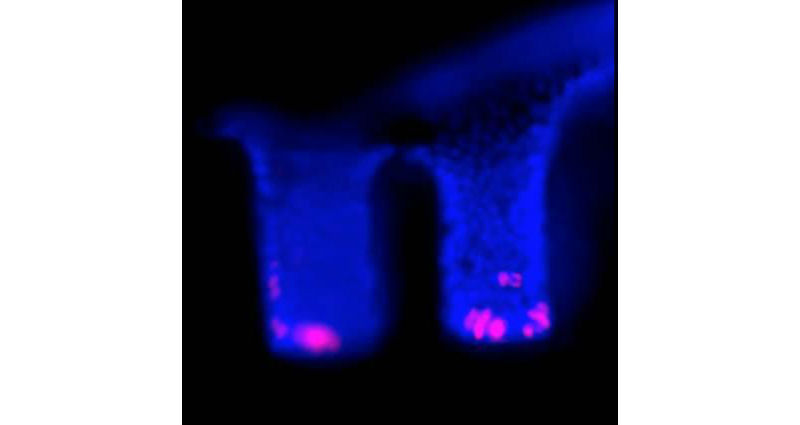 These are fluorescent images of the side view of two synthetic crypts. Blue: nuclei of the cells. Red: proliferating stem cells in similar location to those in the human colon. (Credit: Scott Magness, PhD, UNC School of Medicine)

To create a dime-sized version of this complex microenvironment, the UNC-NC State team borrowed fabrication technologies from the electronics and microfluidics world. The device is composed of a polymer base containing an array of imprinted or shaped “hydrogels,” a mesh of molecules that can absorb water like a sponge. These hydrogels are specifically engineered to provide the structural support and biochemical cues for growing cells from the gut. Plugged into the device will be various kinds of plumbing that bring in chemicals, fluids, and gases to provide cues that tell the cells how and where to differentiate and grow. For example, the researchers will engineer a steep oxygen gradient into the device that will enable oxygen-loving human cells and anaerobic microbes to coexist in close proximity.

“The underlying concept — to simply grow a piece of human tissue in a dish — doesn’t seem that groundbreaking,” said Magness. “We have been doing that for a long time with cancer cells, but those efforts do not replicate human physiology. Using native stem cells from the small intestine or colon, we can now develop gut tissue layers in a dish that contains stem cells and all the differentiated cells of the gut. That is the thing stem cell biologists and engineers have been shooting for, to make real tissue behave properly in a dish to create better models for drug screening and cell-based therapies. With this work, we made a big leap toward that goal.”

Right now, the team has a working prototype that can physically and chemically guide mouse intestinal stem cells into the appropriate structure and function of the gut. For several years, Magness has been isolating and banking human stem cells from samples from patients undergoing routine colonoscopies at UNC Hospitals. As part of the grant, he will work with the rest of the team to apply these stem cells to the new device and create “simulacra” that are representative of each patient’s individual gut. The approach will enable researchers to explore in a personalized way how both the human and microbial cells of the gut behave during healthy and diseased states.

“Having a system like this will advance microbiota research tremendously,” said Bultman. “Right now microbiota studies involve taking samples, doing sequencing, and then compiling an inventory of all the microbes in the disease cases and healthy controls. These studies just draw associations, so it is difficult to glean cause and effect. This device will enable us to probe the microbiota, and gain a better understanding of whether changes in these microbial communities are the cause or the consequence of disease.”