Investigators at Children’s Hospital Los Angeles and the University of Southern California have demonstrated the feasibility of implanting a micropacemaker system in the pericardial sac surrounding the heart — a breakthrough that may open up new cardiac pacing options for children and adults.

The micropacemaker — inserted through a single tiny incision — avoids an invasive surgical procedure and the complications related to long pacemaker leads. The study, “Minimally Invasive Implantation of a Micropacemaker into the Pericardial Space,” is available online in advance of publication by Circulation: Arrhythmia and Electrophysiology.

“Much about this device and its implantation is novel — starting with implanting an entire pacing system in the pericardial space in a minimally invasive fashion, which has never been done before,” says CHLA cardiologist Yaniv Bar-Cohen, MD, director of the Southern California Consortium For Technology and Innovation in Pediatrics and professor of Clinical Pediatrics and Medicine, Keck School of Medicine of USC.

Bar-Cohen and Gerald E. Loeb, MD, professor in the Department of Biomedical Engineering at the USC Viterbi School of Engineering, are lead investigators on the study. Along with Ramen Chmait, MD, associate professor of Obstetrics and Gynecology at USC, the research team is also collaborating on the invention of the first micropacemaker to treat fetuses in utero.

“Our work on the fetal pacemaker served as a bridge to this development,” says Bar-Cohen. Unlike the fetal system, the micropacemaker has the potential to benefit a much larger population, including children, people born with congenital heart disease and adults for whom traditional pacemakers are less than ideal. 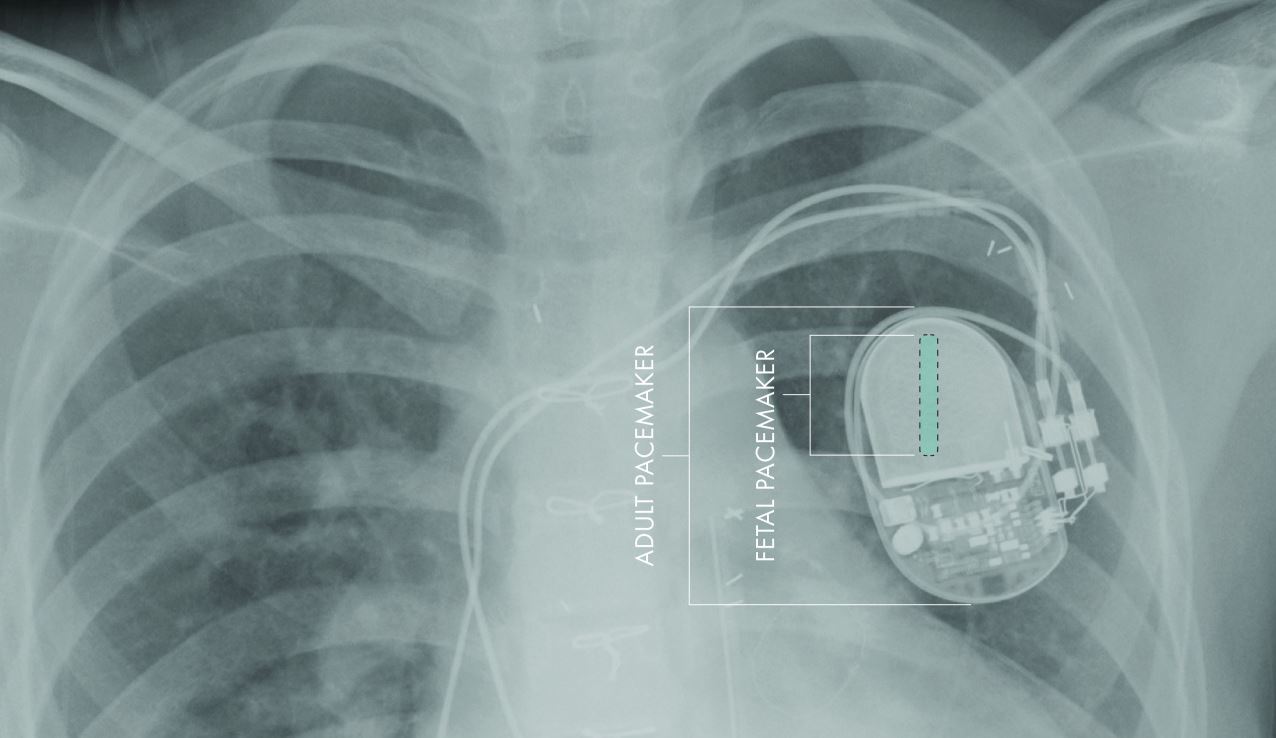 Traditional systems — called transvenous — have been a primary solution for permanent pacing, however, many patients with slow or irregular heartbeats are not considered good candidates for such devices. The electrode wires are passed through veins into the right ventricle or atrium, often traveling long distances, making lead failure a challenge. Leadless systems are located inside blood vessels, which increases the risk of dislodgement and infection.

The CHLA-USC research team performed percutaneous implantations in a model system, with a focus on improving the implantation tools and techniques from one experiment to the next. In the final procedure, they implanted a functional pacing system, achieving up to five days of pacing.

The investigators are seeking an industry partner to collaborate on further development of the device, which features several innovations. A flexible short lead acts as a spring-loaded hinge between the pacemaker body and a corkscrew electrode implanted perpendicularly into the heart surface. A sheath developed by the team secures positioning with retractable features. After deployment, the hinge returns to a 90-degree angle, as the micropacemaker orients itself to minimize system stress.

The new micropacemaker enables pacing of the left ventricle (LV); most systems only pace the right ventricle. A growing body of research supports the benefits of LV pacing for better cardiac synchrony.

In addition, the design allows formation of a biological support matrix that results from natural fibrosis.

“As a mechanical support, this living connective tissue has benefits over the use of synthetic polymer, which can degrade over time,” says Loeb. He adds that further testing of the device is ongoing.