In the 1960s, French radiologist Charles Gros working at University of Strasbourg, asked the imaging machine maker Compagnie Générale de Radiologie (CGR) to find a way to build a dedicated device for X-ray breast imaging that would provide better images than conventional equipment and was also more comfortable for women.

The task fell to CGR engineers Jean Bens and Emile Gabbay. They came up with a special X-ray tube that emitted low-energy radiation that produced uniform images and contrast that allowed doctors to see breast tissue in greater detail. They called their machine Senographe and brought it to market in 1966.

GE acquired the Paris-based CGR in 1987, and mammography machines that followed the Senographe remain the standard of care for breast cancer screening. But they aren’t perfect. Sometimes they yield false positives and lead to unnecessary stress. In other instances, it may be difficult for physicians to see through what they call “dense breast tissue,” which can mask tumors. Some 40 percent of women in the U.S. have dense breasts, so this is no small issue.

But recently, another Parisian, GE nuclear physicist Francesca Braga, has helped commercialize an add-on to the GE mammography gantry called SenoClaire that allows doctors to image the breast in a greater detail and could improve the odds of finding cancer and getting the results right the first time around. 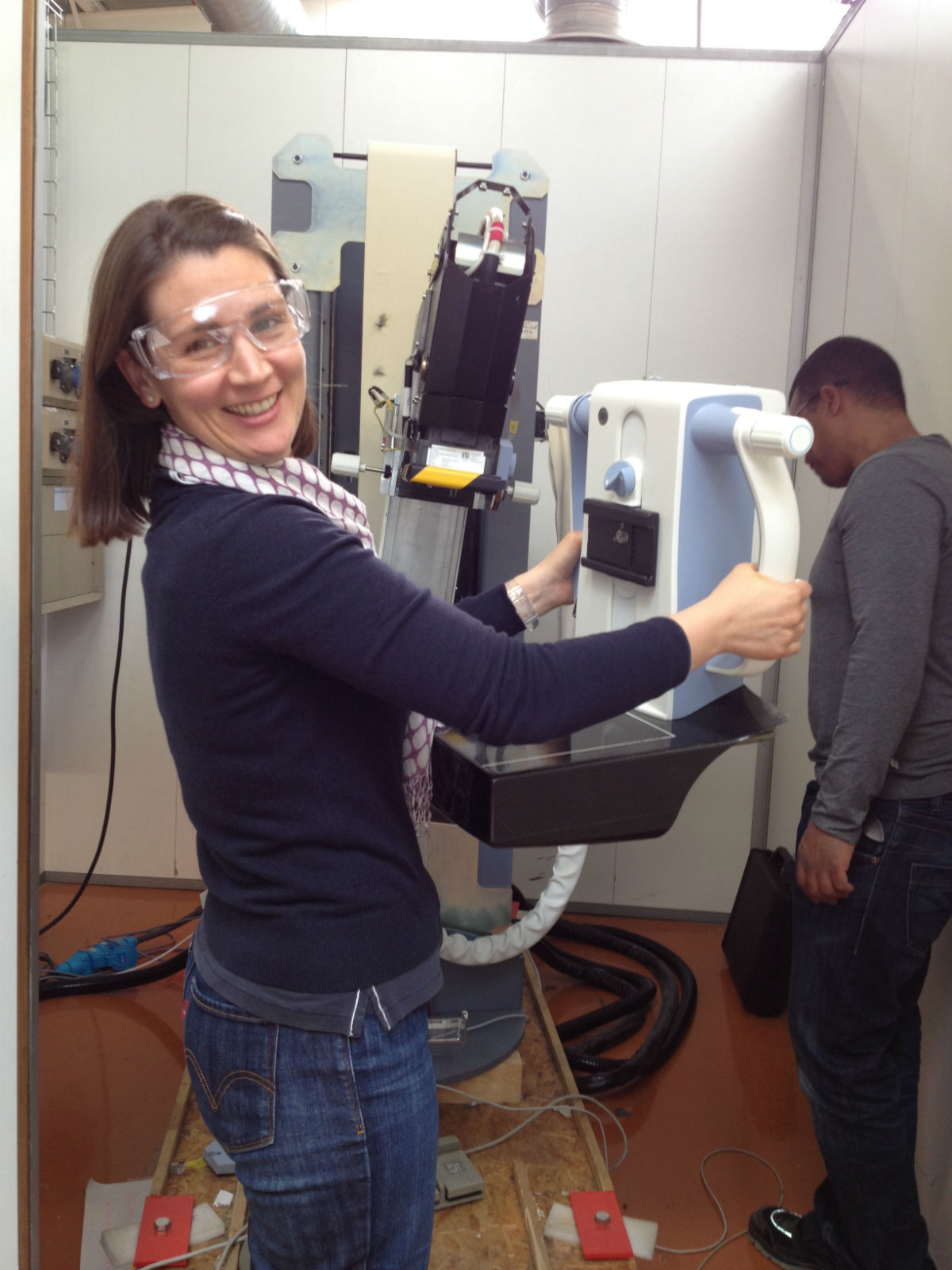 Braga in her lab. Her grandmother is a breast cancer survivor. “You can immediately relate your work to what it means for women and for breast cancer,” she says. “The passion starts there.” (Credit: GE Healthcare)

The original idea behind SenoClaire came from Daniel B. Kopans, a radiologist at Massachusetts General Hospital in Boston who invented a technique called digital breast tomosynthesis (DBT) in the early 2000s, and built a prototype with scientists at GE Global Research Center. DBT delivers 3D images of the breast by taking nine low-dose mammograms from different angles and using powerful algorithms to arrive at the result. Whereas a 2D image of a square might look flat, a 3D image reveals that the square is actually a box.

Braga, who is Italian, works at GE Healthcare’s facility just outside Paris. Last year, she and her team of 120 engineers brought DBT to market. “As program manager, I always saw my role as a ‘chef d’orchestre,’” Braga says. “I simply led this project with a lot of tenacity and passion, and put all of myself into inspiring and motivating the team even in difficult times. A lot of my motivation came simply from being a woman that will go through breast cancer screenings in her life, if nothing more.”

Unlike traditional mammographs, SenoClaire images the breast in 3D in 0.5 mm spaced-planes or slices, and allows radiologists to “cut” through the breast so that each plane is virtually free of overlapping tissue in front and behind. They can then reconstruct the entire breast by combining the set of virtual cuts. Inspect each “slice” is similar to leafing through pages of a book (see top GIF).

“Traditional mammography uses 2D imaging — you compress the breast and take a picture,” Braga says. “But when you compress the breast, you create puddles of tissue that can hide lesions that are cancer. The image can also show what looks like a lesion but which in reality is not. You may have to call the patient back for another mammogram for nothing.”

SenoClaire uses the same amount of radiation as a traditional 2D mammogram, and a much lower dose than an average CT scan. The machine acquires images in approximately 10-second intervals, using a “step and shoot” approach that helps eliminate the blurring that occurs with traditional continuous-sweep X-rays.1

Braga, who has double degrees from universities in Milan and Paris, had originally intended to work in nuclear physics. “But I could not find a real motivation, because I couldn’t see the immediate impact,” she says.

Instead, she went to work for GE in 1999, straight from university. She quickly joined the company’s mammography engineering team and found a way to combine her expertise with an issue she felt personally connected to. “It was perfect,” she says. “My grandmother had been a survivor of breast cancer and my mother’s best friend died of breast cancer when I was a student. You can immediately relate your work to what it means for women and for breast cancer. The passion starts there.”

It took Braga and her team six years to turn Dr. Kopans’ invention into a viable machine and attain FDA approval, which they received last year.

The results are encouraging. Braga said that while the machine could not remove the discomfort of the experience, her team worked to make it as comfortable as they could — an important aspect of convincing women to come in for screenings. “SenoClaire gives radiologists clarity around the information in the images he is looking at,” Braga says. “So they have a better sense of what they are seeing and could make a more confident decision.”