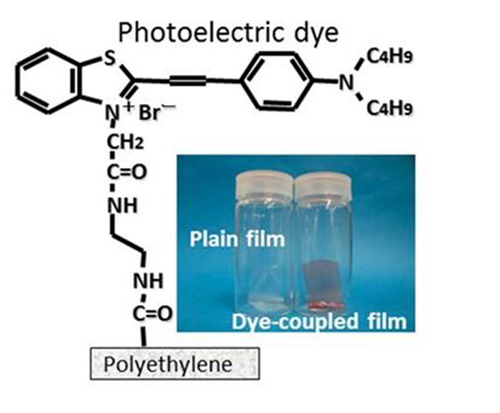 The main component of Okayama University-type retinal prosthesis (OURePTM) is a photoelectric dye molecule, the structure of which is shown. The dye molecules are attached to a polyethylene film, resulting in a promising retinal implant. Quantitative testing experiments were done on the response of dye-coupled (OURePTM) films and plain films, implanted in rats, to flashing LED light. (Credit: Okayama University)

Researchers at Okayama University report in the Journal of Artificial Organs the promising performance of a retinal prosthesis material when implanted in rats. The material is capable of converting external light stimuli into electric potentials that are picked up by neurons. The results signify an important step towards curing certain hereditary eye diseases.

Retinitis pigmentosa is a hereditary retinal disease, causing blindness due to dead photoreceptor cells but with other retinal neurons being alive. A potential remedy for patients diagnosed with this disease are prostheses replacing the non-functioning photoreceptor cells with artificial sensors, and making use of the functioning of the remaining, living neurons. Now, a team of researchers from Okayama University led by Toshihiko Matsuo & Tetsuya Uchida has quantitatively tested the response of a promising type of prosthesis, when implanted in rats, to external light flashes — a crucial step in the further development of retinal prostheses.

The prosthesis tested by the researchers was developed earlier at Okayama University, and is known as Okayama University-type retinal prosthesis (OUReP).  The main component of OUReP is a photoelectric dye: an organic molecule capable of converting light into electric potentials. Uchida and colleagues attached the dye molecules to a thin film of polyethylene — a safe and stable biocompatible material — and implanted the dye-coupled film (of size 1 mm x 5 mm) subretinally in the eyes of 10 male rats six weeks old.  Cranial electrodes for registering potentials were attached two to three weeks later. The researchers also implanted plain, polyethylene films in 10 other rats for comparison purposes.

The scientists tested the response of the implanted OUReP sensors to flashing white light-emitting diodes (LEDs) placed on the surface of the rats’ corneas (the transparent front parts of the eyes) for different background-light conditions. The experiments were done with the rats anesthetized, and after appropriate periods of adaptation to dark or light conditions. Comparisons between results obtained with dye-coupled films and plain polyethylene films showed that the former led to visually evoked potentials — confirming the potential of OUReP as a retinal prosthesis for treating diseases like retinitis pigmentosa.

The use of OUReP poses no toxicity issues and, because of the high density of the dye molecules on the polyethylene film, offers a high spatial resolution.  Regarding tests on human eyes, Matsuo and colleagues point out that “a first-in-human clinical trial for OUReP at Okayama University Hospital … will be planned in consultation with [Japan’s] Pharmaceuticals and Medical Devices Agency”.

Okayama University-type retinal prosthesis (OUReP), developed at Okayama University, is a material that mimics the function of photoreceptor cells present in mammalian eyes: phototransduction, the conversion of light into neuron signals triggering biological processes.  The main component of OUReP are 2-[2-[4-(dibutylamino)phenyl]ethenyl]-3-carboxymethylbenzothiazolium bromide  molecules, photoelectric dye molecules that can convert light into electric potentials. These molecules are attached to the surface of a thin polyethylene film; the resulting dye-coupled OUReP film can be used as an implant replacing non-functioning photoreceptor cells. OUReP is a particularly promising prosthesis in situations — such as for the disease retinitis pigmentosa — where other retinal neuron cells, sending neuron signals to the brain, are still active.

Other approaches for remedying dead photoreceptor cells rely on the use of a digital video camera integrated into glasses worn by the patient. The video images are converted to electrical signals transmitted to a receiver implanted in the patient’s body, after which electric currents are sent out of an array of electrodes implanted around the patient’s retina.  Challenges associated with this type of approach, as e.g. implemented in the Argus II Retinal Prosthesis System (Second Sight, Inc.), include the miniaturization of the components, their biocompatibility, achieving high spatial resolution, and the need for an external power source.  As demonstrated by the team led by Toshihiko Matsuo, the use of OUReP overcomes these issues.