Oregon approved taxes on hospitals, health insurers and managed care companies in an unusual special election Tuesday that asked voters — and not lawmakers — how to pay for Medicaid costs that now include coverage of hundreds of thousands of low-income residents added to the program’s rolls under the Affordable Care Act.

Measure 101 was passing handily in early returns Tuesday night. The single-issue election drew national attention to this progressive state, which aggressively expanded its Medicaid rolls under President Barack Obama’s health care reforms. Oregon now has one of the lowest rates of uninsured residents in the nation at 5 percent. About 1 million Oregonians — 25 percent — now receive health care coverage from Medicaid.

Maine voters recently went to polls to approve the expansion of their Medicaid program, but experts said Oregon was the first state to take the issue of funding that expansion directly to voters.

The taxes are a short-term fix for health care funding that will generate between $210 million and $320 million in revenue over two years.

“Tonight’s vote is an affirmation of our belief that Oregon is better off with a robust Medicaid program for our most vulnerable citizens,” Andy Davidson, president and CEO of the Oregon Association of Hospitals and Health Systems, said in a statement. “We are proud to have been a partner in fighting for these patients and their families.” 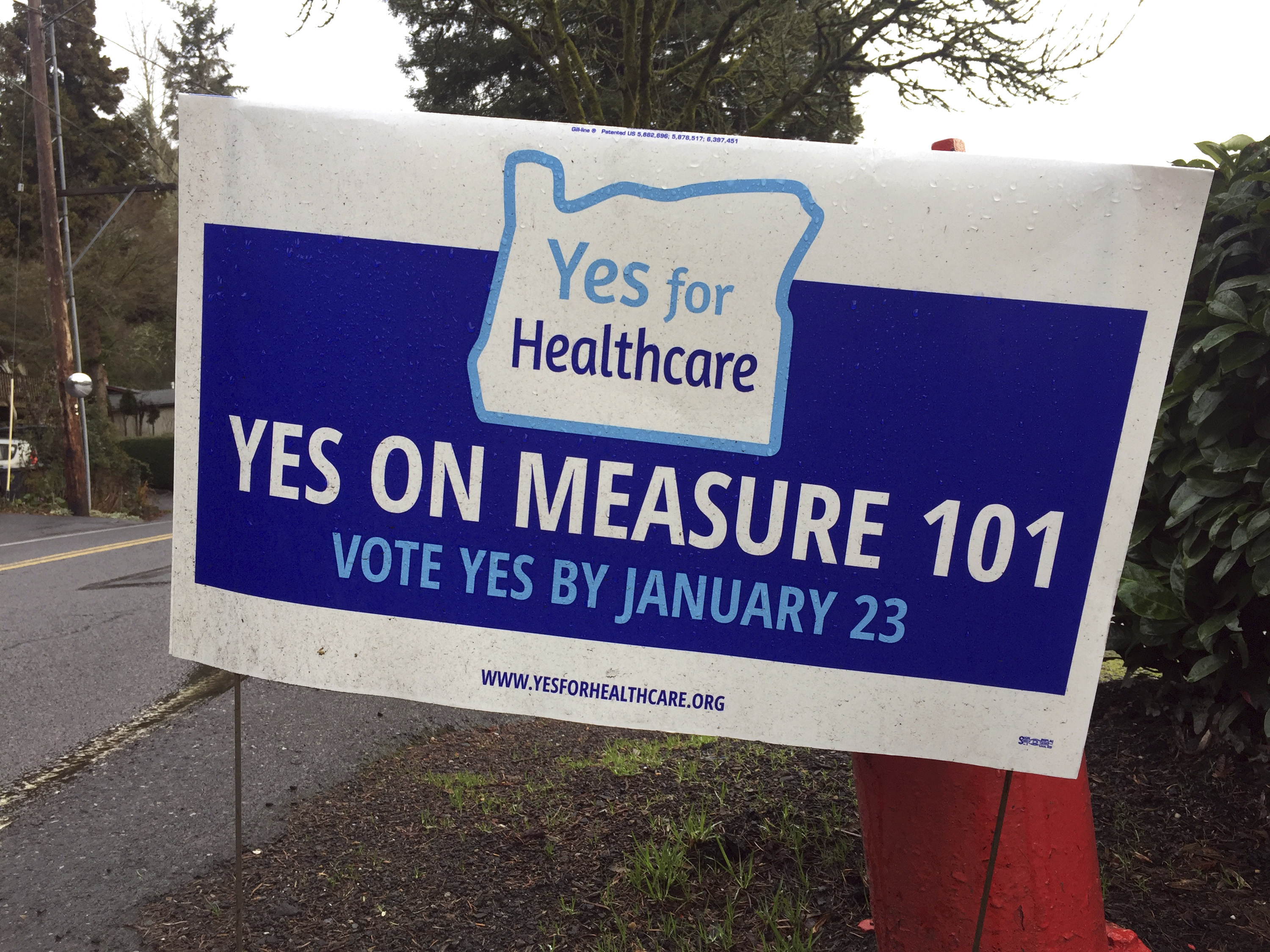 In this Jan. 19, 2018, file photo. a sign in support of Oregon’s Measure 101 is displayed by a homeowner along a roadside in Lake Oswego, Ore. The taxes before voters in the special election on Tuesday, Jan. 23, 2018, are a short-term fix for health care funding designed to generate between $210 and $320 million in revenue over two years. Oregon aggressively expanded its Medicaid rolls under the Affordable Care Act and now, just 5 percent of its population is uninsured. But state lawmakers have struggled to come with a long-term funding plan. (AP Photo/Gillian Flaccus, File)

The measure creates a 0.7 percent tax on some hospitals and a 1.5 percent tax on the gross health insurance premiums and on managed care organizations. The nonpartisan voter pamphlet said if the measure failed, the state might lose an additional $630 million to $960 million in federal Medicaid matching funds that flow to the poorest in the state.

That possibility was enough to galvanize health care providers, doctors and nurses associations and insurers behind Measure 101. Hospitals said the costs of treating uninsured patients in emergency rooms would be more than the taxes imposed.

Proponents also argued that more than 350,000 Oregonians who secured health care coverage under the expansion would lose it if Measure 101 failed.

The ballot measure arose from a grassroots campaign to put parts of a bipartisan legislative funding solution passed last year before voters.

Republican Rep. Julie Parrish and several colleagues were angered by portions of the bill that exempt unions and large, self-insured corporations like Nike from Medicaid taxes but not Oregonians who buy insurance on health care exchanges.

They also believed hospitals and insurers will pass the cost to consumers, despite language that limits premium rate increases to 1.5 percent.

In 2014, Oregon was one of 32 states and the District of Columbia to allow people making 138 percent of the federal poverty line to qualify for Medicaid under the Affordable Care Act. That’s $34,600 for a family of four. Before, they had to make less to qualify.

The changes brought a slew of new enrollees, not just in Oregon but in all states that allowed an expansion of the program. For the first two years, the federal government covered the full cost for those new enrollees.

At the same time, the federal government asked Oregon to pay more for its other Medicaid recipients because of its strong economy.