Oregon aggressively expanded its Medicaid rolls under the Affordable Care Act, adding enough people to leave only 5 percent of its population uninsured — one of America’s lowest rates.

Now, with the reduction of a federal match that covered those enrollees, the state is calling on voters to decide how to pay for its ballooning Medicaid costs.

A special election on Tuesday asks Oregonians whether they approve of a tax on hospitals, health insurers and managed care companies that would leave Medicaid, as it is now, untouched. More than 1 in 4 residents here rely on it.

Maine voters were in the national spotlight when they recently approved Medicaid expansion. But experts say Oregon’s election is the only instance of voters — not lawmakers — getting the final say on the complicated question of how to fund rising Medicaid costs.

The outcome could have significant consequences for the state’s health care spending.

“If it’s not supported, you have a huge hole, and where do you go from there?” says Stacey Mazer, senior staff associate with the National Association of State Budget Officers. “I followed these issues starting in the fall, and this was the biggie.” 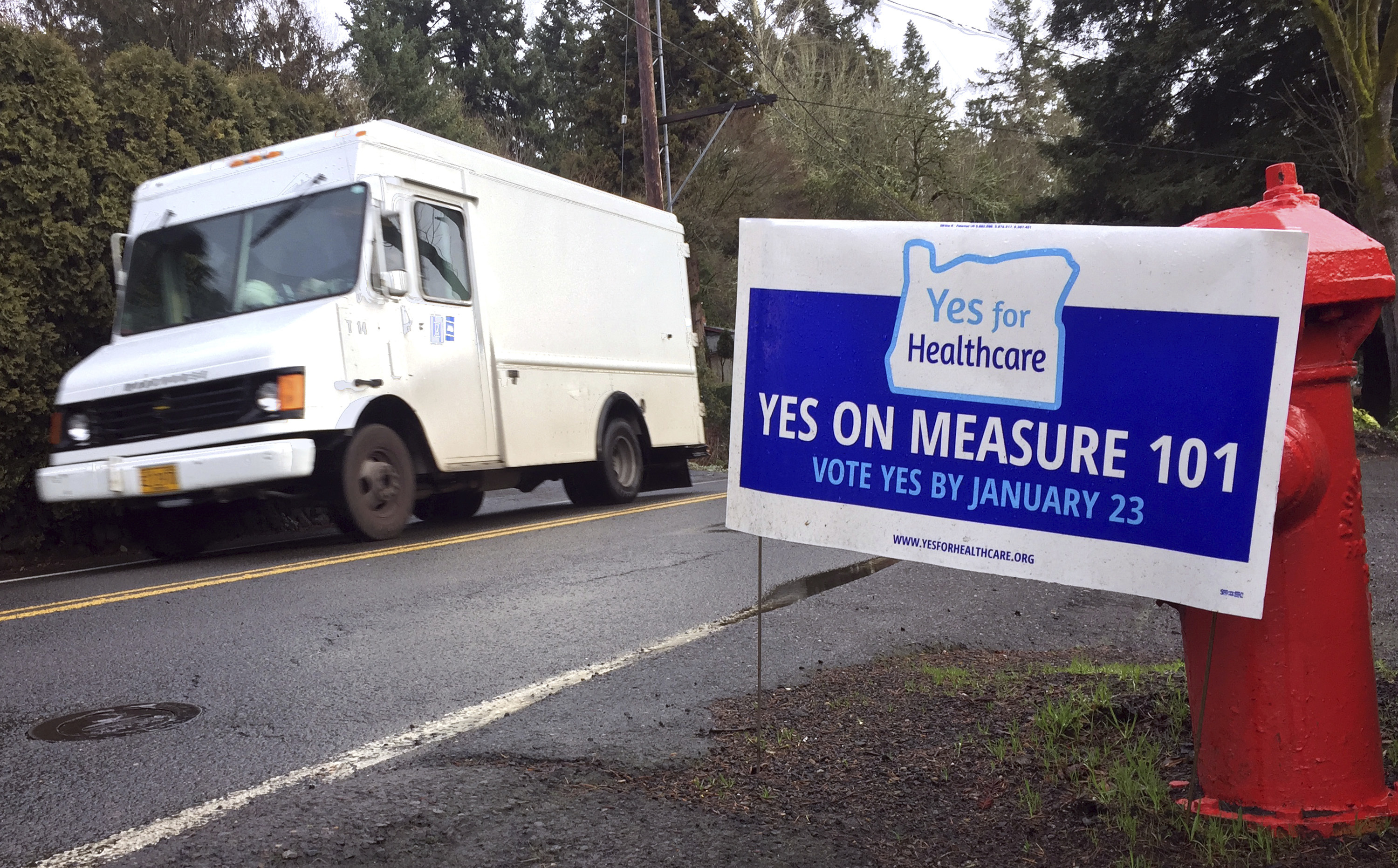 In this Friday, Jan. 19, 2018, photo a sign in support of Oregon’s Measure 101 is displayed by a homeowner along a roadside in Lake Oswego, Ore. Experts say the special election Tuesday in Oregon is the only instance where voters — instead of lawmakers — will decide how to fund the Medicaid expansion among the 32 states and Washington that added enrollees under the Affordable Care Act. (AP Photo/Gillian Flaccus)

Measure 101 would impose a 0.7 percent tax on some hospitals and a 1.5 percent tax on the gross health insurance premiums collected by insurers and on managed care organizations, raising anywhere from $210 million to $320 million over the next two years.

Proponents call the tax an “assessment” and say money raised could cover the more than 350,000 low-income Oregonians who were added to the plan since 2014 while state lawmakers work out a long-term solution.

The loss of that revenue could jeopardize an additional $630 million to $960 million in federal Medicaid matching funds that flow to the poorest in the state, according to the nonpartisan voter pamphlet. That possibility prompted the very hospitals and health insurers who would be taxed to come out as the measure’s biggest backers. They say the cost of the taxes would be less than that of uninsured emergency-room visits.

The ballot measure arose from a grassroots campaign to put parts of a bipartisan legislative funding solution passed last year before voters. Republican Rep. Julie Parrish and several colleagues were angered by portions of the bill that exempt large, self-insured corporations like Nike from Medicaid taxes but not Oregonians who buy insurance on health care exchanges.

They also believe hospitals and insurers will pass the cost to consumers, despite language that limits premium rate increases to 1.5 percent.

Parrish, who represents a Portland suburb, spearheaded the drive to collect more than 84,000 signatures to get the measure on the ballot. Her cellphone number appears in the official voter’s guide with a note urging voters to call her with questions.

“This is not a ‘We hate Medicaid’ referendum,” Parrish says. “This is about the fact that our colleagues put forward some pieces of the funding package that we believed to be unfair, unequitable and unsustainable.”

Those in favor of the measure say Parrish’s opposition to the taxes is what’s unsustainable. More than 175 organizations have backed the pro-Measure 101 campaign, including former Gov. John Kitzhaber, an emergency room doctor.

Portland resident Kelly Burke has volunteered at a pro-Measure 101 phone bank. She briefly lost her insurance years ago when she was pregnant with her second child. She now has a serious auto-immune disease and is thankful she has insurance through her partner’s employer.

“What people don’t understand is that people are working, but they still can’t afford health care,” she says.

In 2014, Oregon was one of 32 states and the District of Columbia to allow people making 138 percent of the federal poverty line to qualify for Medicaid under the Affordable Care Act. That’s $34,600 for a family of four. Before, they had to make less to qualify.

The changes brought Oregon’s slew of new enrollees. For the first two years, the federal government covered the full cost for them — and for those in other states.

At the same time, the federal government asked Oregon to pay more for its other Medicaid recipients because of its strong economy. And state lawmakers voted to provide Medicaid coverage for children living in the country illegally starting January 1, adding another $27 million in costs.

Parrish says she has a backup funding plan if Measure 101 fails, though her opponents say it’s not workable.

Lawmakers reconvene for a short, six-week session next month.