The maker of the powerful painkiller OxyContin said it will stop marketing opioid drugs to doctors, bowing to a key demand of lawsuits that blame the company for helping trigger the current drug abuse epidemic.

OxyContin has long been the world’s top-selling opioid painkiller, bringing in billions in sales for privately-held Purdue, which also sells a newer and longer-lasting opioid drug called Hysingla.

The company announced its surprise reversal on Saturday. Purdue’s statement said it eliminated more than half its sales staff this week and will no longer send sales representatives to doctors’ offices to discuss opioid drugs. Its remaining sales staff of about 200 will focus on other medications.

The OxyContin pill, a time-release version of oxycodone, was hailed as a breakthrough treatment for chronic pain when it was approved in late 1995. It worked over 12 hours to maintain a steady level of oxycodone in patients suffering from a wide range of pain ailments. But some users quickly discovered they could get a heroin-like high by crushing the pills and snorting or injecting the entire dose at once. In 2010 Purdue reformulated OxyContin to make it harder to crush and stopped selling the original form of the drug.

Purdue eventually acknowledged that its promotions exaggerated the drug’s safety and minimized the risks of addiction. After federal investigations, the company and three executives pleaded guilty in 2007 and agreed to pay more than $600 million for misleading the public about the risks of OxyContin. But the drug continued to rack up blockbuster sales. 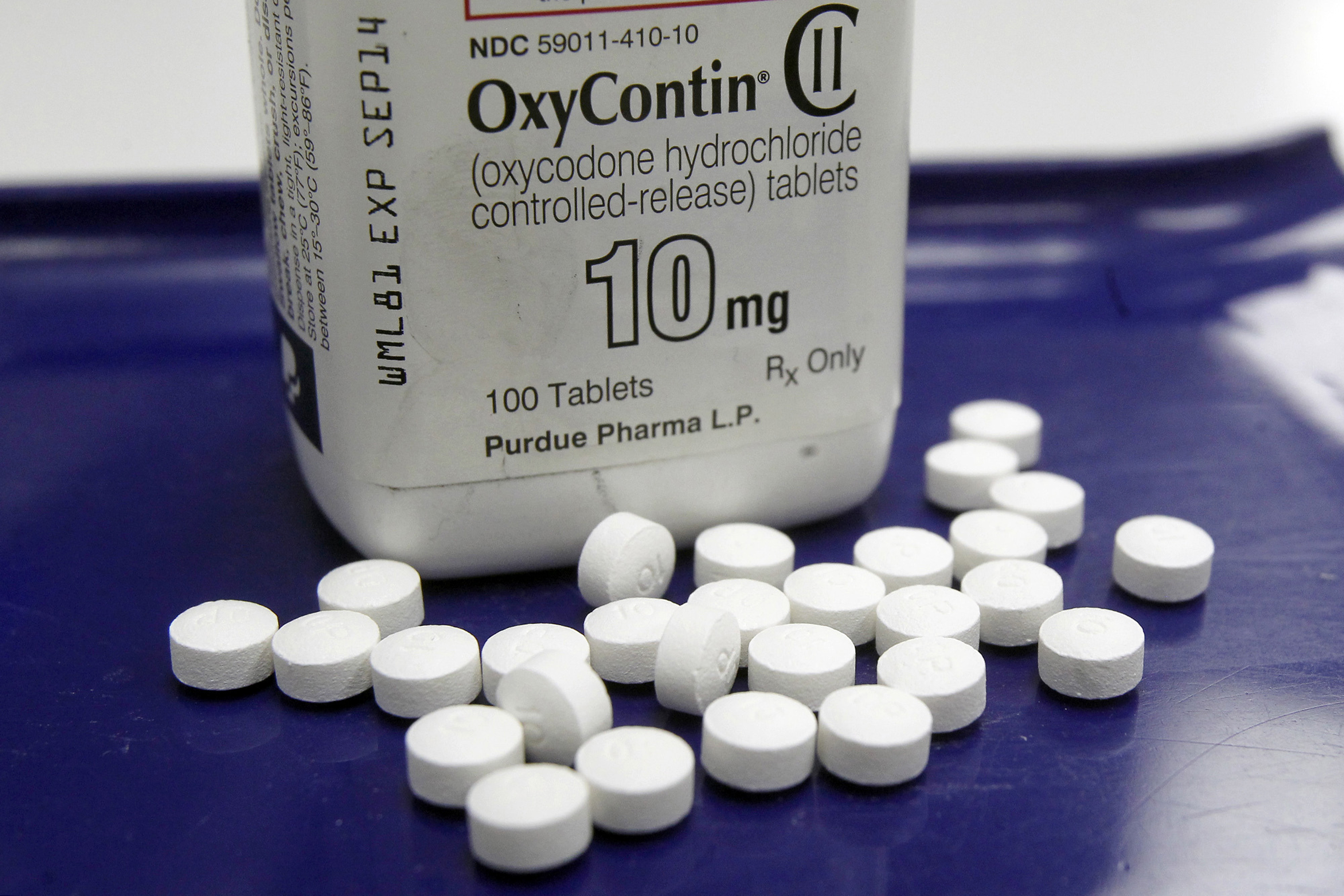 This Feb. 19, 2013 file photo shows OxyContin pills arranged for a photo at a pharmacy in Montpelier, Vt. The maker of the powerful painkiller said it will stop marketing opioid drugs to doctors, a surprise reversal after lawsuits blaming the company for helping trigger the current drug abuse epidemic. OxyContin has long been the world’s top-selling opioid painkiller and generated billions in sales for privately-held Purdue. (AP Photo/Toby Talbot, File)

“It is difficult to promote more cautious prescribing to the medical community because opioid manufacturers promote opioid use,” he said.

Allergan, which makes three opioid pain medications, said it has not actively marketed those drugs in years, and Janssen Pharmaceuticals, a unit of Johnson & Johnson, said it stopped marketing the medications in 2015. Both said opioid drugs make up a very small portion of their total revenue. Another drugmaker, Insys, said it was not able to comment immediately, while Teva Pharmaceutical Industries did not immediately respond to a request for comment.

Kolodny said that opioids are useful for cancer patients who are suffering from severe pain, and for people who only need a pain medication for a few days. But he said the companies have promoted them as a treatment for chronic pain, where they are more harmful and less helpful, because it’s more profitable.

“They are still doing this abroad,” Kolodny added. “They are following the same playbook that they used in the United States.”

Purdue Pharma only does business in the U.S. It is associated with two other companies, Mundipharma and Napp, that operate in other countries. It said those companies have separate leadership and operate according to local regulations.

Purdue and other opioid drugmakers and pharmaceutical distributors continue defending themselves against hundreds of local and state lawsuits seeking to hold the industry accountable for the drug overdose epidemic. The lawsuits say drugmakers misled doctors and patients about the risks of opioids by enlisting “front groups” and “key opinion leaders” who oversold the drugs’ benefits and encouraged overprescribing. State and local governments are seeking money and changes to how the industry operates, including an end to the use of outside groups to push their drugs.

Kolodny is serving as an expert advising the court in those lawsuits.

U.S. deaths linked to opioids have quadrupled since 2000 to roughly 42,000 in 2016, or about 115 lives lost per day. Although initially driven by prescription drugs, most opioid deaths now involve illicit drugs, including heroin and fentanyl.