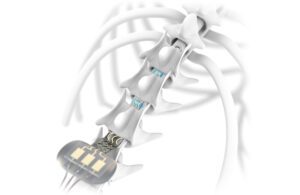 The spinal cord stimulating electrodes are implanted directly on the spinal cord, below the vertebrae. [Image courtesy of the Swiss Federal Institute of Technology in Lausanne]

The latest iteration of a spinal cord stimulation implant has allowed three paralyzed patients to take steps independently on a treadmill within a day of their device’s activation, and to stand, walk, swim and pedal a bicycle after five months of rehab.

In 2018, the technology helped a patient get out of his wheelchair and walk after being paralyzed by a partial spinal cord injury, but the latest results helped three men with complete spinal cord injuries walk again outside of the lab.

“Our stimulation algorithms are still based on imitating nature,” system co-developer Grégoire Courtine, a professor at the Swiss Federal Institute of Technology in Lausanne, said today in a news release. “And our new, soft implanted leads are designed to be placed underneath the vertebrae, directly on the spinal cord. They can modulate the neurons regulating specific muscle groups. By controlling these implants, we can activate the spinal cord like the brain would do naturally.” 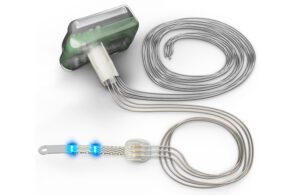 The spinal cord stimulating device, shown from pacemaker to electrode implant [Image courtesy of the Swiss Federal Institute of Technology in Lausanne]

The patients triggered their leg and trunk muscles using buttons on a walker that relayed the command to a tablet and then to a pacemaker in their abdomen, which fired signals to implanted spinal leads that stimulate specific neurons.

“Our breakthrough here is the longer, wider implanted leads with electrodes arranged in a way that corresponds exactly to the spinal nerve roots,” co-developer Jocelyne Bloch, a professor and neurosurgeon at Lausanne University Hospital, said in the news release. “That gives us precise control over the neurons regulating specific muscles.”

The team is working with Onward Medical, headquartered in Eindhoven in the Netherlands.

“We are working hard to bring these therapies to the [spinal cord injury] community as soon as possible and our first introduction, for restoration of hand and arm function, is expected in early 2023,” Onward CEO Dave Marver said in a news release.

Science and Nature Medicine have more details on each patient’s success; watch Courtine and Bloch describe the latest breakthrough in the video below.