Chitosan, a biomaterial derived from the chitin shells of crustaceans and insects, has already been developed by scientists at Harvard’s Wyss Institute for Biologically Inspired Engineering into an environmentally-friendly and fully biodegradable substitute for plastic. It is only natural that the team, led by Wyss Institute Founding Director Donald Ingber, has also become interested in extending chitosan’s usefulness into the clinical realm.

“What’s good for the environment is also good for us,” said Javier Fernandez, who first developed a chitosan bioplastic called ‘Shrilk’  with Ingber back in 2014. 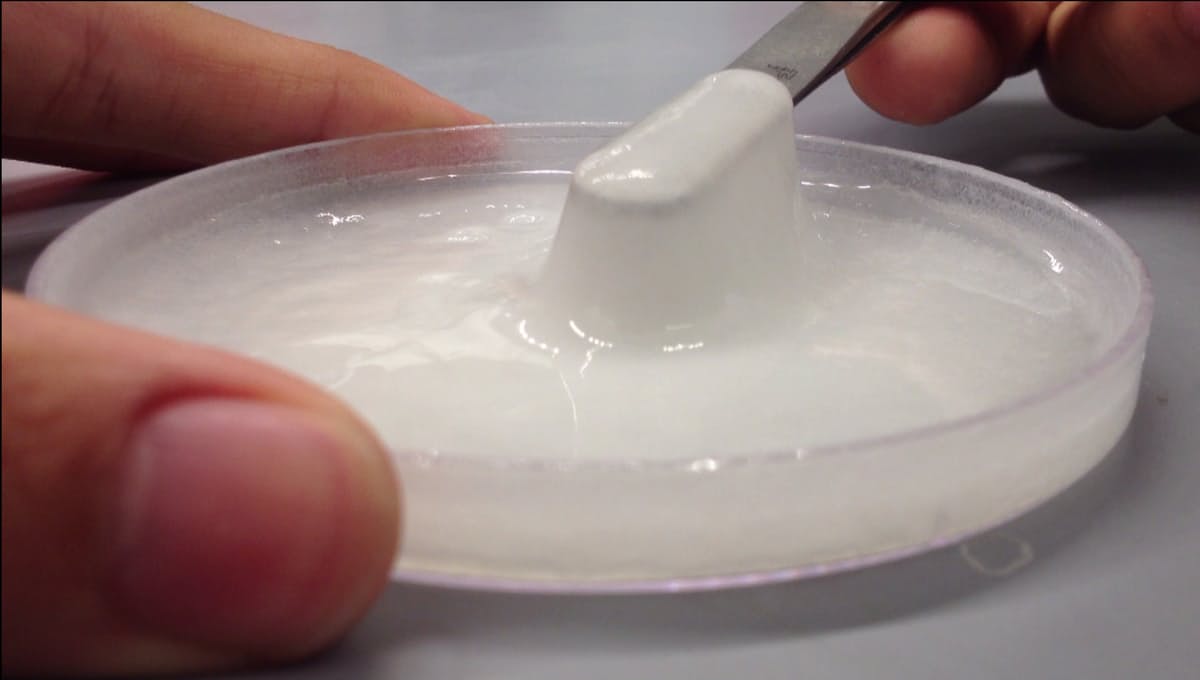 A Wyss Institute team has leveraged a commercially-available enzyme called transglutaminase to directly bond chitosan biomaterial (such as liquid chitosan pictured here) to bodily tissue in a variety of forms including sheet, spray, and foam application. (Credit: Wyss Institute at Harvard University)

Now Ingber and Fernandez have unveiled a new study in the journal Tissue Engineering that demonstrates biodegradable chitosan bioplastics can be used to bond bodily tissues to repair wounds or even to hold implanted medical devices in place. As chitosan is already approved for clinical use and it has antimicrobial properties, the approach could one day be utilized to immediately seal tissue tears or other serious injuries, preventing infection from setting in before a patient can be moved to a hospital for more in-depth care.

“This work really spans the entire mission of the Wyss, as we have developed a biomaterial that could be used in sustainable consumer products and packaging or, as we now show, be adapted for clinical uses,” said Fernandez, Ph.D., the first author on the new study, who is a former Wyss Institute Postdoctoral Fellow and is currently an Assistant Professor at Singapore University of Technology and Design. “The material is non-toxic and biodegradable, leaving behind no trace once it has served its purpose.”

To adapt chitosan to seal wounds and surgical incisions, Ingber and Fernandez searched for a way to quickly and tightly bond chitosan materials to living tissues.  They zeroed in on transglutaminase (TG), a naturally occurring enzyme found in the body – where it keeps skin strong and strengthens blood clots – that has also been adopted to bond proteins together during commercial food processing. 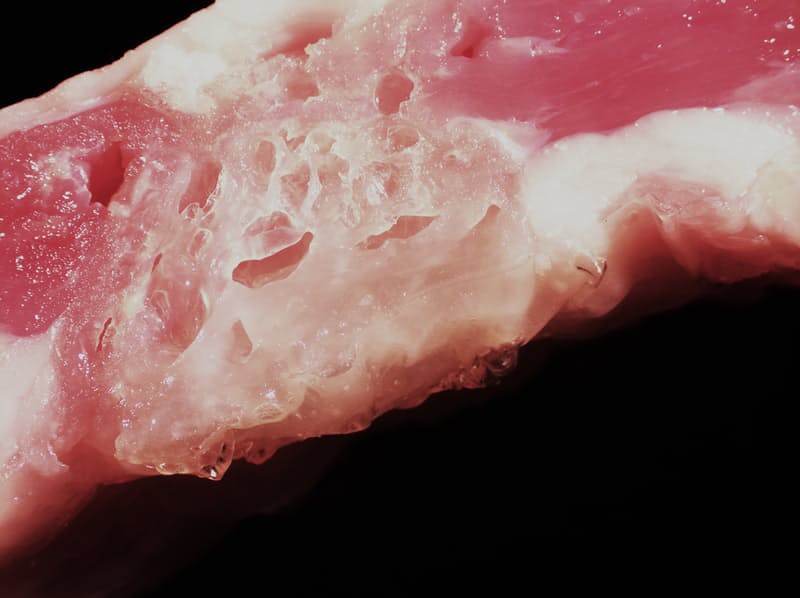 In this image of chitosan foam bonded to a one-centimeter-long defect in explanted porcine muscle, the foam is so well adhered to the muscle that it is notably difficult to distinguish the transition between chitosan foam and native tissue. (Credit: Wyss Institute at Harvard University)

“As we started thinking about going in vivo, we faced the challenge of how to adhere chitosan to living tissues,” said Ingber, M.D., Ph.D., who is senior author on the new study and in addition to directing the Wyss Institute is Judah Folkman Professor of Vascular Biology at Harvard Medical School and the Vascular Biology Program at Boston Children’s Hospital as well as Professor of Bioengineering at Harvard’s John A. Paulson School of Engineering an Applied Sciences. “We explored using different formulations of transglutaminase to bond various forms of chitosan materials, including sheets, foams and sprays, to many different types of tissues.”

A sheet of chitosan may be applied with a transglutaminase powder to patch wounds, as the team demonstrated using an ex vivo porcine intestine with a large hole in it. A pressure test revealed that the chitosan patch was even stronger than the native intestinal tissue.

For the spray, a stream of liquid chitosan and liquid transglutaminase combine during application to quickly bond chitosan to tissue and close wounds. The team used this approach to seal a porcine lung that had sustained a puncture wound while it was cyclically insufflated with air to mimic inspiration and expiration. The spray application could also be useful for covering large areas of vulnerable tissue, like might be found on someone whose skin had sustained serious burns.

To treat even larger and more traumatic wounds like those that might occur on the battlefield or during a motor vehicle accident, Ingber and Fernandez formulated a chitosan foam that could potentially be used to fill and seal larger wound cavities until a patient can be transported to a hospital for surgical intervention.

The team’s findings also suggest that their approach could be tailored to bond inorganic surfaces – which make up crucial components of many different kinds of biomedical implants and microfluidic devices – to tissue or chitosan.

“Right now our approach is very general, but we could theoretically take this concept and adapt it into almost any form imaginable for a broad number of possible uses,” said Fernandez.

Looking ahead, the team hopes to develop an array of specific applications through collaboration with clinical partners.