A microscope about the size of a penny is giving scientists a new window into the everyday activity of cells within the spinal cord. The innovative technology revealed that astrocytes–cells in the nervous system that do not conduct electrical signals and were traditionally viewed as merely supportive–unexpectedly react to intense sensation.

The spinal cord is crucial for sensing and responding to the world. Sometimes it even works independently from the brain, such as when your hand recoils from a hot stove before the sensation has fully registered. But it is unknown exactly how the cells within the spinal cord encode these and other feelings from the skin or internal organs.

In the new study, senior author Axel Nimmerjahn, an assistant professor in Salk’s Waitt Advanced Biophotonics Center, and his team improved upon the miniaturized microscopes they first described back in 2008. The researchers’ new version–which features numerous hardware and software improvements–enabled them to visualize changes in cellular activity in awake, roaming mice.

“For a long time, researchers have dreamed of being able to record cellular activity patterns in the spinal cord of an awake animal. On top of that, we can now do this in a freely behaving animal, which is very exciting,” says first author Kohei Sekiguchi, a Salk researcher and PhD student at the University of California, San Diego. 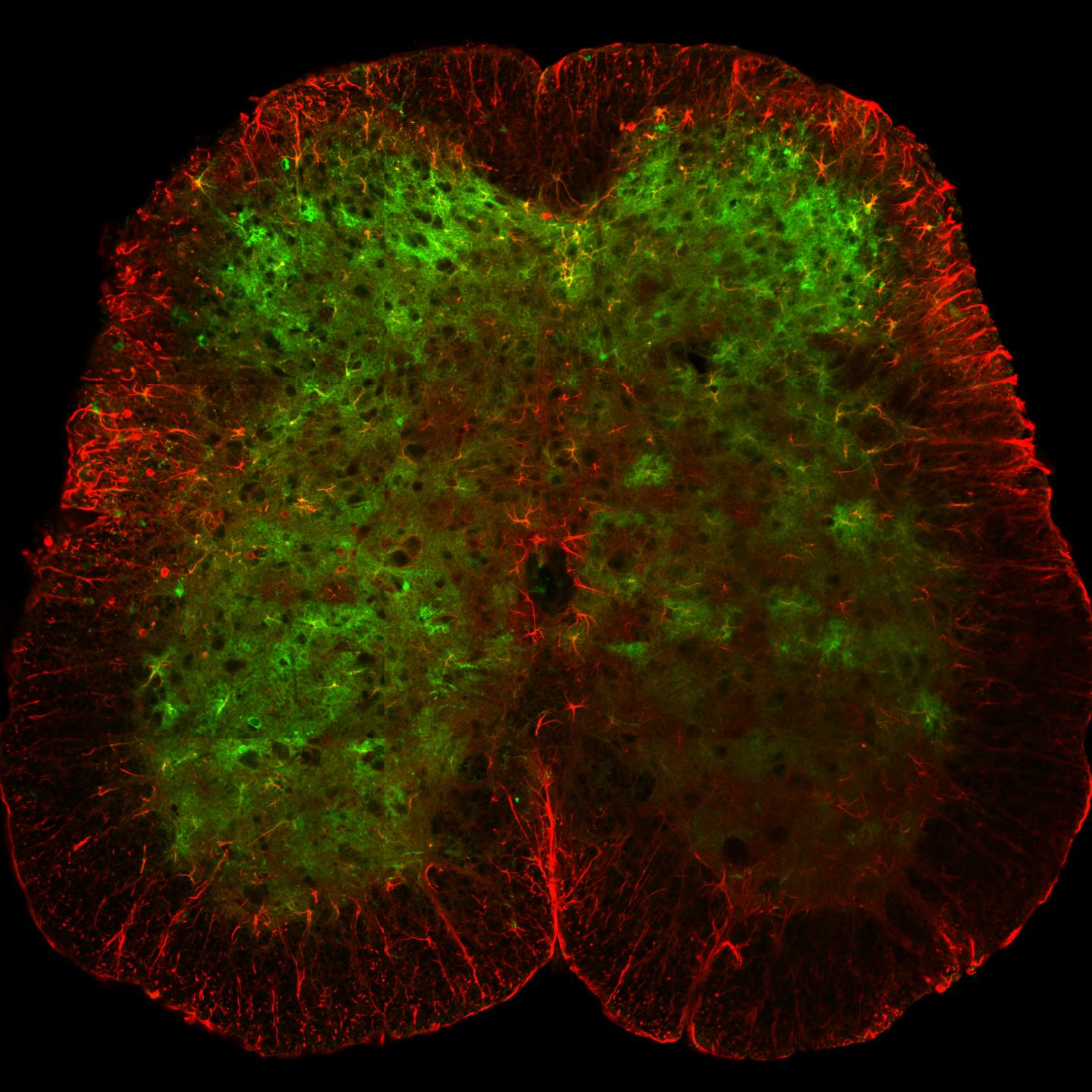 Salk Institute scientists show the surprising involvement of cells called astrocytes in spinal sensory processing. Here, astrocytes (genetically labeled in green) in a spinal cord (co-stained with glial fibrillary acidic protein, red, to visualize its outline) react to the activity of sensation with their own chemical signals. (Credit: Salk Institute)

Most of the Salk team’s previous work focused on deploying microscopes to observe the brains of living animals. The spinal cord, by contrast, presented a bigger challenge for several reasons. For example, unlike the brain, multiple, independently moving vertebrae surround the spinal cord. The spinal cord is also closer to pulsating organs (heart and lungs), which can hinder stable views of the cells within. However, by developing new microscopy and procedural and computational approaches, the team was able to overcome these challenges and capture the action of living cells in real time and during vigorous movements.

In the new work, the group found that distinct stimuli–such as light touch or pressure–activate different subsets of spinal sensory neurons. They also found that certain features, like the intensity or duration of a given stimulus, are reflected in the activity of the neurons.

To the team’s surprise, astrocytes, traditionally thought to be passive support cells, also respond to stimuli (albeit differently than the neurons). Though the astrocytes cannot send electrical signals like neurons can, they generated their own chemical signals in a coordinated way during intense stimuli. 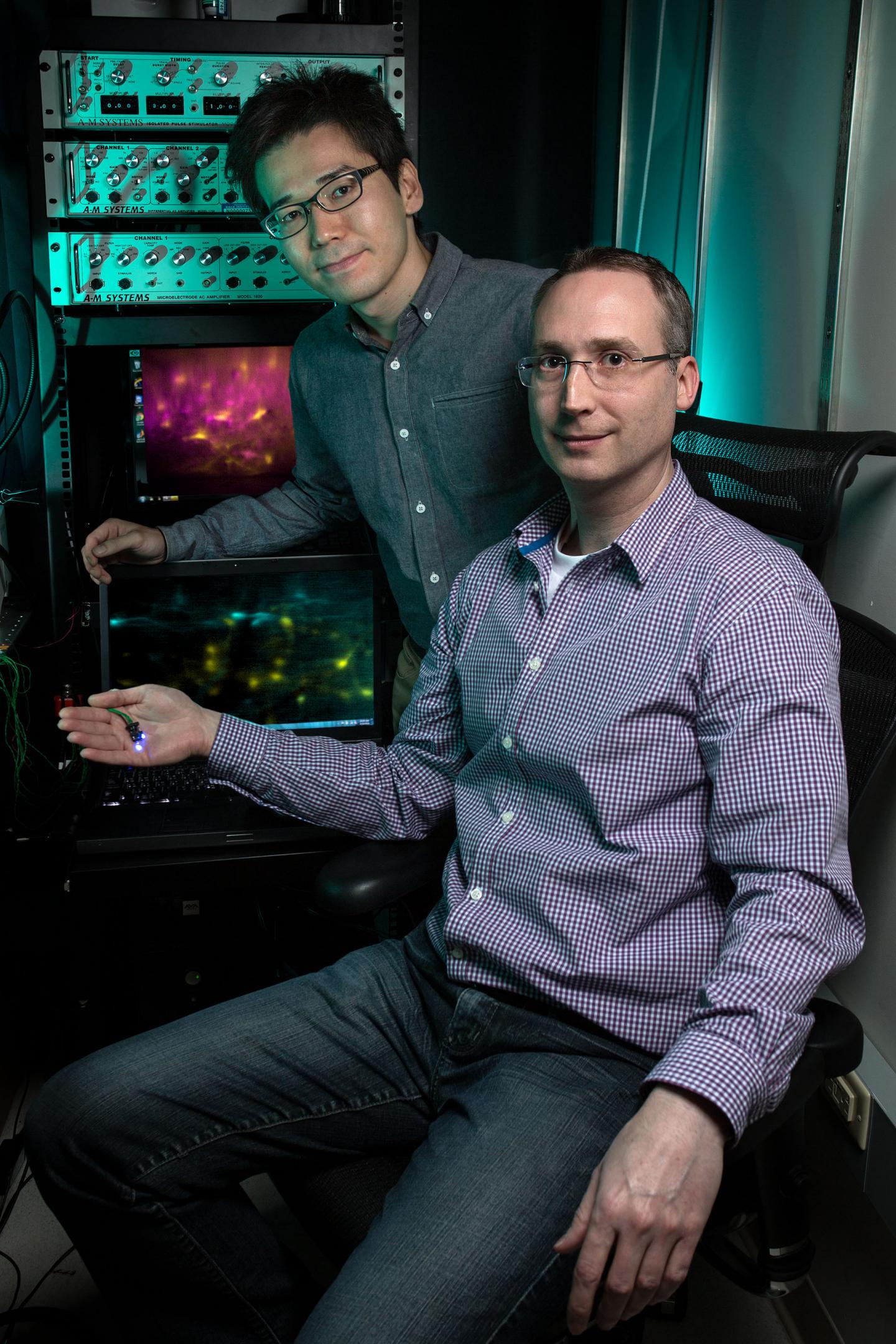 Nimmerjahn is excited about this result because his group has a longstanding interest in understanding astrocytes and their roles in nervous system function and disease. These cells are increasingly appreciated as important players in how the nervous system develops and operates and could serve as promising new drug targets, he says.

“Not only can we now study normal sensory processing, but we can also look at disease contexts like spinal cord injury and how treatments actually affect the cells,” says Nimmerjahn.

The team is now working to simultaneously record touch or pain-related activity in the brain and spinal cord using additional iterations of the miniaturized microscopes, which allow them to monitor and manipulate multiple cell types at even higher resolutions.