New research led by scientists at UC Berkeley shows for the first time that PET scans can track the progressive stages of Alzheimer’s disease in cognitively normal adults, a key advance in the early diagnosis and staging of the neurodegenerative disorder.

In the process, the scientists also obtained important clues about two Alzheimer’s-linked proteins – tau and beta-amyloid – and how they relate to each other.

The findings, published March 2 in the journal Neuron, come from positron emission tomography (PET) of 53 adults. Five were young adults aged 20-26, 33 were cognitively healthy adults aged 64-90 and 15 were patients aged 53-77 who had been diagnosed with probable Alzheimer’s dementia.

The stages of tau deposition were established by German researchers Heiko and Eva Braak through post-mortem analysis of the brains of suspected Alzheimer’s patients.

“Braak staging was developed through data obtained from autopsies, but our study is the first to show the staging in people who are not only alive, but who have no signs of cognitive impairment,” said study principal investigator Dr. William Jagust, a professor at UC Berkeley’s School of Public Health and at the Helen Wills Neuroscience Institute and a faculty scientist at the Lawrence Berkeley National Laboratory. “This opens the door to the use of PET scans as a diagnostic and staging tool.”

PET scans are used to detect early signs of disease by looking at cellular-level changes in organs and tissue. The results of the scans in this study paralleled Braak neuropathological stages, which range from one to six, describing the degree of tau protein accumulation in the brain.

Tau vs. Amyloid
Their findings also shed light on the nature of tau and amyloid protein deposits in the aging brain. For many years, the accumulation of beta amyloid plaques was considered the primary culprit in Alzheimer’s disease. Over the past decade, however, tau, a microtubule protein important in maintaining the structure of neurons, has emerged as a major player. When the tau protein gets tangled and twisted, its ability to support synaptic connections becomes impaired.

While a number of symptoms exist that signal Alzheimer’s disease, a definitive diagnosis has been possible only through an examination of the brain after the patient has died. The availability of amyloid imaging for the past decade has improved this situation, but how Alzheimer’s developed as a result of amyloid remains a mystery. Studies done in autopsies linked the development of symptoms to the deposition of the tau protein.

Through the PET scans, the researchers confirmed that with advancing age, tau protein accumulated in the medial temporal lobe — home to the hippocampus and the memory center of the brain. 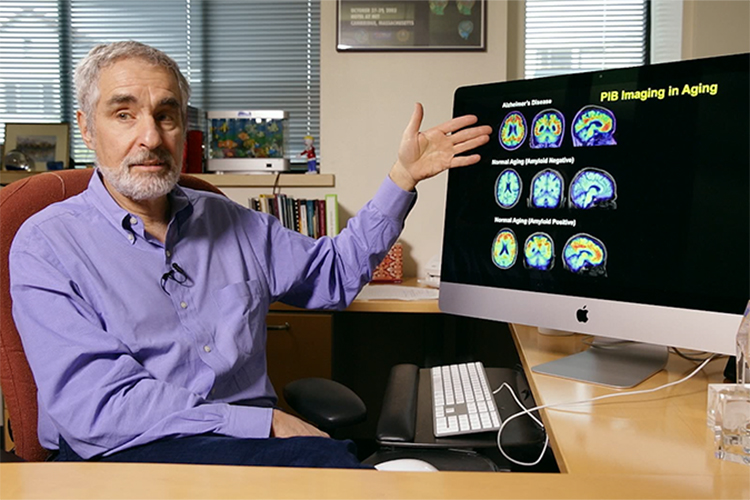 “Tau is basically present in almost every aging brain,” said Schöll, who holds an appointment at Sweden’s University of Gothenburg. “Very few old people have no tau. In our case, it seems like the accumulation of tau in the medial temporal lobe was independent of amyloid and driven by age.”

The study revealed that higher levels of tau in the medial temporal lobe was associated with greater declines in episodic memory, the type of memory used to code new information. The researchers tested episodic memory by asking subjects to recall a list of words viewed 20 minutes earlier.

Both Proteins Involved in Dementia
One question yet to be answered is why so many people have tau in their medial temporal lobe yet never go on to develop Alzheimer’s. Likewise, adults may have beta amyloid in their brains and yet be cognitively healthy. 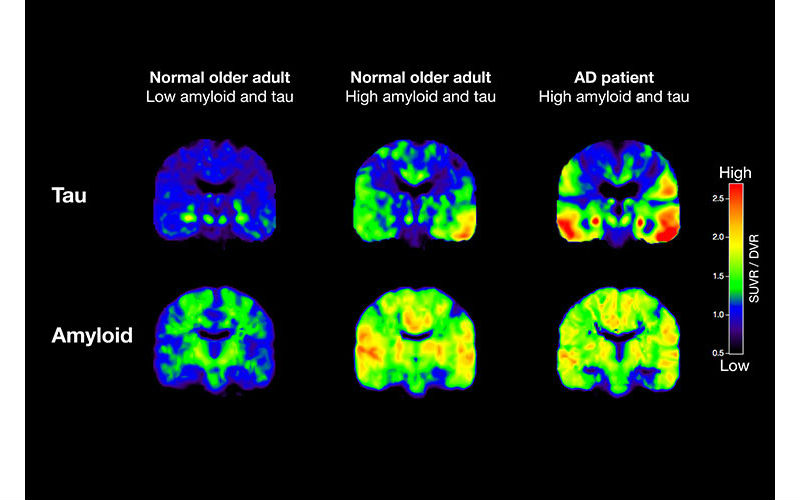 Shown are PET scans that track tau (top row) and beta-amyloid from two normal older people and one patient with Alzheimer’s disease (AD). The normal older adult on the left has no brain amyloid deposition and minimal tau in the medial temporal lobe. In the normal older adult in the middle, amyloid deposition is present throughout the brain, and tau has spread out into the temporal cortex. In the AD patient, both amyloid and tau are spread through the brain. (Credit: Michael Schöll)

“It’s not that one is more important than the other,” said Lockhart. “Our study suggests that they may work together in the progression of Alzheimer’s.”

While higher levels of tau in the medial temporal lobe was linked to more problems with episodic memory, it was when tau spread outside this region to other parts of the brain, such as the neocortex, that researchers saw more serious declines in global cognitive function. Significantly, they found that tau’s spread outside the medial temporal lobe was connected to the presence of amyloid plaques in the brain.

“Amyloid may somehow facilitate the spread of tau, or tau may initiate the deposition of amyloid. We don’t know. We can’t answer that at this point,” said Jagust. “All I can say is that when amyloid starts to show up, we start to see tau in other parts of the brain, and that is when real problems begin. We think that may be the beginning of symptomatic Alzheimer’s disease.”

What the study does indicate is that tau imaging could become an important tool in helping to develop therapeutic approaches that target the correct protein — either amyloid or tau — depending on the disease stage, the researchers said.