Scientists can now watch cancer cells in 3D-detail by combining imaging technology.  They are able to see an array of images such as when cancer cells move, the moment spinal nerve circuits are wired and the immune cells inside a zebrafish’s ear, according to Science Daily.

For years, scientists have looked under microscopes to see living cells in, what they thought, was intricate detail. Physicist Eric Betzig describes viewing groups of cells as organisms scrambling light similar to a bag of marbles. “This raises the nagging doubt that we are not seeing cells in their native state, happily ensconced in the organism in which they evolved,” said Betzig, according to Science Daily.

To really look inside these jumbling groups of cells, Betzig and his team combined two miscroscopy technologies. They turned to adaptive optics, a technology used by astronomers to provide clear views of far away celestial objects. Next, to view the array of scattering cells in 3D, the researchers used lattice light sheet microscopy. This quickly sweeps a thin sheet of light through the cell over and over, until a series of 2D images is created, thus building a high-resolution 3D movie.

These findings could open a new look at biology in the subcellular level. In one video from the microscope, a cancer cell slithered its way through a blood vessel as it attempted to take over the vessel wall.

Betzig said that clear imaging has allowed his team to “explode” apart cells in order to focus on one individual cell. One such way they have used it is to remodel internal organelles during cell division. Without the help of adaptive optics and the lattice light sheet microscope, Betzig said this 3D imaging would not excel nearly as well. Although, adaptive optics is a complicated and expensive technology, he hopes that the next step will be to make this technology user-friendly and cost-effective.

“Our technique is really robust, and you don’t need anything special to apply our technology. [In the future] it could be a very convenient add-on component to commercially available microscopes,” says Wang, a postdoctoral researcher in Betzig’s lab, according to Phys Org. 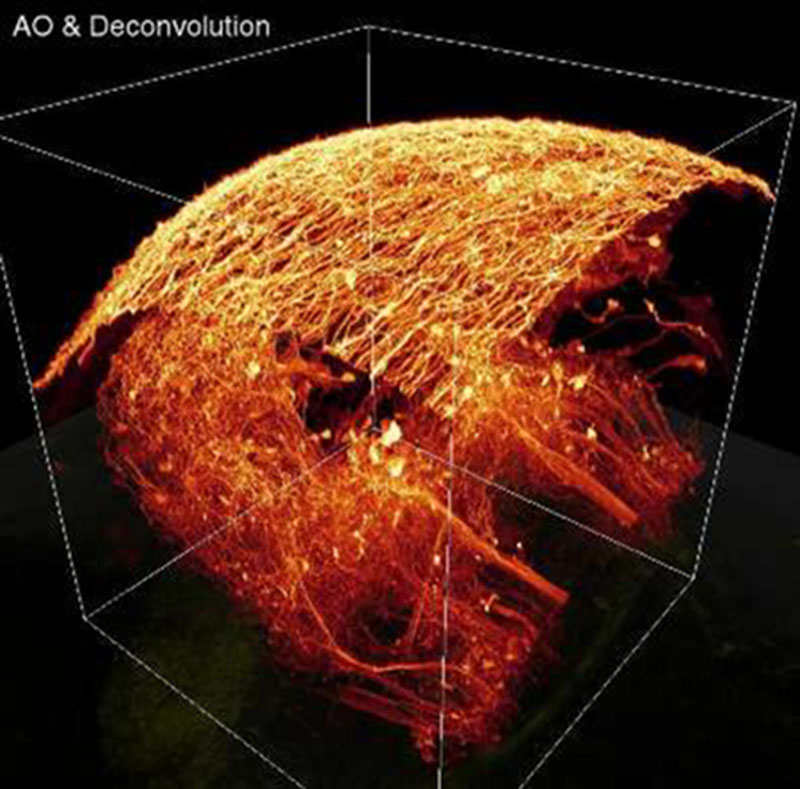 This image is a frame grab from a video showing imaging from an adaptive optics (AO) microscope operating in two-photon excitation (TPE) mode. Imaging shows a membrane-labeled subset of neurons in the brain of a living zebrafish embryo. This image shows what one would see with adaptive optics (AO) and deconvolution turned on. Read more at: https://phys.org/news/2015-04-technique-cues-astronomy-ophthalmology-sharpen.html#jCp