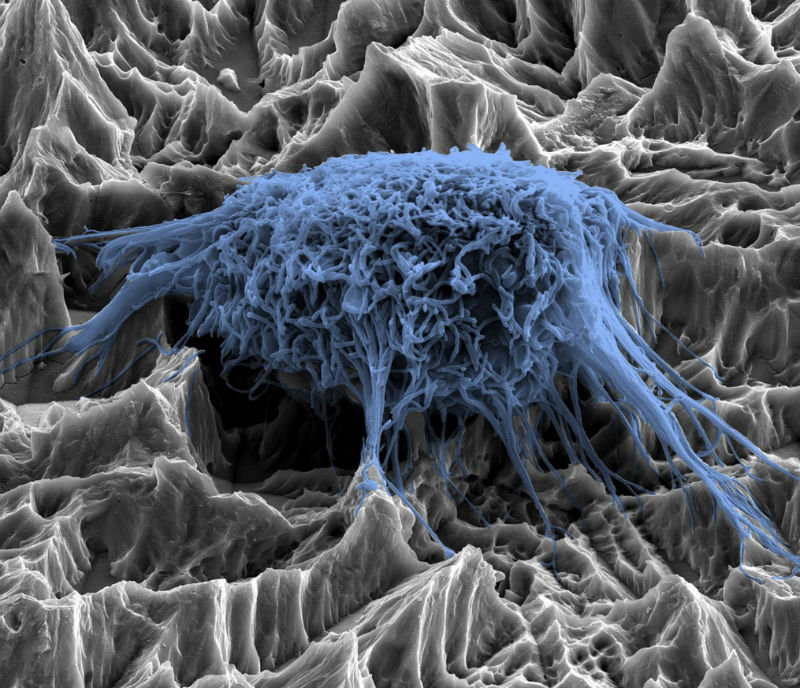 One million dental implants are inserted every year in Germany, and often they need to be replaced due to issues such as tissue infections caused by bacteria. In the future, these infections will be prevented thanks to a new plasma implant coating that kills pathogens using silver ions.

Bacterial infection of a dental implant is a dreaded complication, as it carries with it a high risk of jawbone degeneration. Implanting an artificial dental root sets off a race between infectious pathogens and the body’s own cellular defenses. If the bacteria win, they form a biological film over the titanium to protect themselves from anti-biotics. Once the implant is colonized by germs, the result is an inflammatory reaction, which can result in bone atrophy.

To lower the risk of infection and improve the long-term effectiveness of the implant, researchers at the Fraunhofer Institute for Manufacturing Technology and Advanced Materials IFAM in Bremen have developed a new type of implant coating in cooperation with industry partners. The DentaPlas coating helps prevent the growth of bacteria, thus allowing the implant to properly take hold and thereby form a faster and more permanent bond with the jawbone. The trick to this lies in combining surface materials that feature physical as well as chemical properties. “We have given the DentaPlas coating a rough texture, which promotes cellular growth, in addition to combining it with a hydrophilic plasma polymer coating, which attracts moisture,” says Dr. Ingo Grunwald, project manager at the IFAM. Researchers have integrated silver nanoparticles into the thin plasma polymer coating, which is up to just 100 nanometers thick. The silver nanoparticles dissolve over a period of several weeks, and during that time they continuously release small quantities of anti-microbial silver ions, which kill bacteria.

Three Layers of Protection
“The DentaPlas system consists of three layers, with two plasma polymer layers surrounding a center layer of silver. Within this structure a biocide reservoir is formed, and the outermost layer releases the ions. This is beneficial because it prevents direct contact between the tissue and the silver particles, which can be toxic when exposed,” says developer Dr. Dirk Salz. Researchers can tailor the silver concentration as well as the thickness of the layers and their porosity. This allows the silver ions to penetrate the outermost plasma polymer layer over a set period of time deemed necessary to properly integrate the implant. When the silver reservoir is exhausted, no more silver ions are released, thus avoiding any long-term toxic effects.

In trials using finished implants and titanium test samples, the IFAM researchers demonstrated that the DentaPlas coating is not only anti-microbial but also fully biocompatible and sterilizable. The test samples were coated using a plasma polymerization facility at the IFAM in Bremen. Researchers confirmed the mechanical stability and robustness of the DentaPlas coating in trials using the lower jawbones of pigs taken from butcher shops. Here, they subjected the DentaPlas coated implants to the rigors of being screwed into place using the instruments found in modern dental practices. The DentaPlas coating passed this stress test with flying colors. Project partner and Fraunhofer spinoff Bio Gate AG successfully transferred the processes of coating the test samples and titanium screws to its own production facilities. The medical tech-nology company is also the manufacturer of the DentaPlas three-layer coating system.

A demonstration unit of the plasma polymer coating is currently available. Researchers will be presenting a dental implant featuring the DentaPlas coating at the MEDICA trade fair in Düsseldorf from November 16 -19 at the joint Fraunhofer booth (Hall 10, Booth G05).