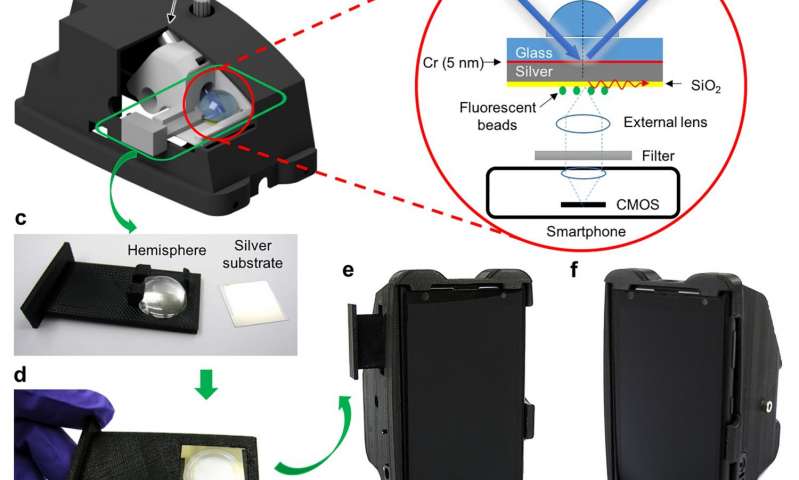 Illustrations and photographs of the mobile phone surface-enhanced fluorescence microscopy device. (a) 3D illustration of the smartphone attachment with the cutaway view of the inner sample stage. (b) Schematic of the Kretschmann configuration implemented in the smartphone attachment. (c,d) Photographs of the hemisphere-embedded sample tray and silver thin film substrate, before (c) and after (d) loading of the silver-coated substrate onto the hemisphere. (e,f) Photographs of the final prototype device from different perspective views. (Credit: UCLA Ozcan Research Group)

An international team of researchers from the University of California, Los Angeles and the Braunschweig University of Technology in Germany has developed an approach to enhance the sensitivity of smartphone-based fluorescence microscopes by ten-fold compared to previously reported mobile phone-based handheld microscopes. This is an important development toward the use of mobile phones for advanced microscopic investigation of samples, sensing of disease biomarkers, tracking of chronic conditions, and molecular diagnostics and testing in general.

Fluorescence is one of the predominant detection modalities for molecular diagnostic tools and medical tests due to the sensitivity and specificity that it enables. Smartphone-based microscopy and sensing techniques require improved detection sensitivity to enable quantification of extremely low concentrations of target molecules, for example, cancer biomarkers, pathogen proteins or even DNA. Therefore, these recent results on enhanced fluorescence microscopy using mobile phones are especially important to provide highly sensitive, mobile and cost-effective readers for molecular diagnostic tests, potentially impacting global health and point-of-care applications.

The sensitivity enhancement was accomplished by placing fluorescent samples on a thin silver film. Although the thickness of the silver film is approximately 2,000-fold thinner than a human hair, it is sufficient to enhance the strength of the excitation light, especially in the vicinity of the fluorescent samples. This is achieved by coupling the energy of an optical beam into plasmonic waves (known as surface plasmon polaritons) that are formed by electron oscillations in the silver film. This plasmonics-based optical enhancement resulted in a cost-effective mobile phone fluorescence microscope that weighs approximately 370 grams, including the smartphone, and achieved repeatable detection of single quantum dots and as few as ~50-80 fluorophores per sample spot. Compared to standard benchtop fluorescence microscopes, this mobile device is more than 20-fold cheaper and lighter.

“We are now capable of detecting a few tens of fluorophores for each sample spot using a low-cost pocket microscope, enabled by plasmonics and mobile phones. This will create numerous opportunities for bringing advanced molecular testing and diagnostics for tackling global health problems, especially in developing countries,” says Aydogan Ozcan, who led the research team at UCLA and is a Chancellor’s Professor of Electrical Engineering and Bioengineering and an associate director of the California NanoSystems Institute (CNSI).