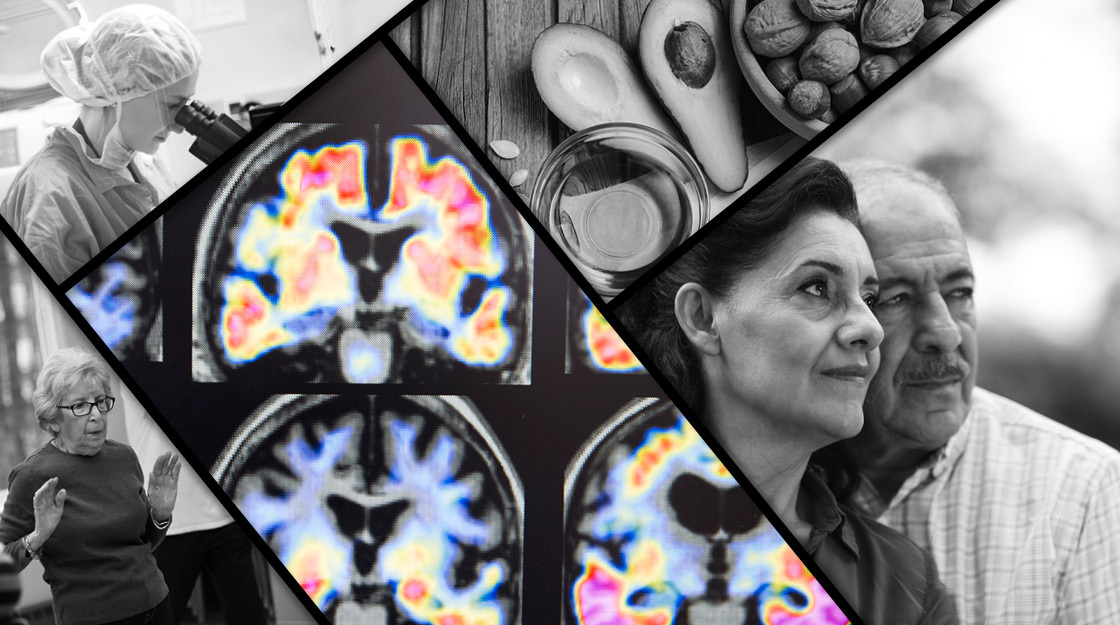 Those are watchwords in the battle against a host of illnesses, from heart disease to cancer to Type 2 diabetes. Early detection gives physicians a chance to minimize damage, to insert a stent and keep blood flowing to the heart, to remove a tumor before one becomes many, to urge crucial lifestyle changes: lose weight, eat better, exercise.

But can the strategy work for Alzheimer’s disease? Scientists are starting to think it might.

The Harvard Aging Brain Study, a National Institute on Aging-backed project now in its seventh year, has shown that amyloid beta, the protein thought to cause Alzheimer’s, accumulates in the brain a decade or more before symptoms occur.

That finding has given new hope to researchers struggling to move beyond a rash of high-profile Alzheimer’s failures in clinical drug trials. In February, just three months after Eli Lilly & Co. announced a trial failure, drug maker Merck & Co. halted a study. Several additional drugs are still in trials, but researchers are reconsidering their approach and wondering whether the problem is in trying to reverse, rather than prevent, dementia.

“I think we’ve failed in 11 phase 3 trials, which is not a good track record,” says Reisa Sperling, a neurology professor at Harvard Medical School, a physician at Brigham and Women’s Hospital, and co-director of the Harvard Aging Brain Study at Massachusetts General Hospital (MGH). “From a clinical point of view, it’s a dismal failure.”

Now, the “catch it early” idea is being put to the test in a new study called A4, or Anti-Amyloid Treatment in Asymptomatic Alzheimer’s Disease, led by Sperling and the University of Southern California’s Paul Aisen. Researchers will try an anti-amyloid drug on people who show no signs of cognitive decline, but who do have abnormally high levels of amyloid beta in their brains.

“I think this is a tremendously important trial,” says Aisen. “It’s the first trial in a population we refer to as ‘preclinical Alzheimer’s disease.’ We believe this is identifying an early stage of the disease, not just ‘at risk’ [patients]…. If we wait for people to have symptoms, there’s already substantial neuro-degeneration.”

Costs of care: Draw your guess

How much will total costs of care rise for Americans age 65 and older living with Alzheimer’s? On the chart below, click and drag with your mouse or finger (on phone/tablet) to complete the line through 2050 and draw your guess. 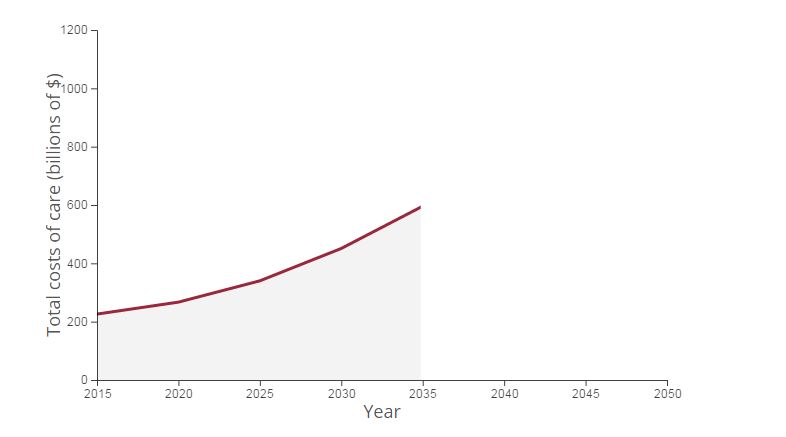 Alzheimer’s is the sixth-leading cause of death in the United States, killing about 94,000 people annually, according to the Centers for Disease Control and Prevention.

An estimated 5 million Americans are living with the disease, a figure expected to climb to 13.5 million by 2050, according to a report by the Alzheimer’s Association. Costs of care are projected to rise from $226 billion in 2015 to $1.1 trillion by 2050, with Medicare and Medicaid paying 70 percent. Developing a treatment to delay Alzheimer’s onset by just five years by 2025 could save an estimated $935 billion over the following 10 years, the report says.

In recent decades, researchers have worked out what many believe is the step-by-step process through which Alzheimer’s does its work. Amyloid beta, a naturally occurring protein whose normal function in the brain remains unclear, builds to unhealthy levels. The amyloid beta forms plaques, which in turn lead to tangles of a protein called tau inside nerve cells, killing them. This triggers inflammation, a natural infection-fighting response, which in this case makes things worse.

A4 is screening 5,000 cognitively normal candidates, age 65 to 85, with the goal of enrolling about 1,150 who have elevated amyloid beta levels. The trial will test Eli Lilly’s solanezumab, an anti-amyloid antibody that was proved safe, though judged ineffective, in patients with mild dementia due to Alzheimer’s. The antibody targets soluble forms of the protein, not the plaques themselves.

Though solanezumab has been tried in Alzheimer’s patients without success, the data from that trial held indications of positive trends, says Sperling.

The A4 study — being conducted at 67 sites in the U.S., Canada, Japan, and Australia — has already enrolled 875 people and is funded by the National Institutes of Health, Eli Lilly, and several philanthropic organizations. Much of the launch work — signing up participants and managing data — is being conducted by the Alzheimer’s Therapeutic Research Institute at USC’s Keck School of Medicine.

The A4 study rests on a foundation laid by the Harvard Aging Brain Study, which began in 2009 and is headed by Sperling and Keith Johnson, a professor of radiology at HMS and MGH. The study, which has funding to run through 2019, images the brains of 60- to 90-year-olds to follow changes over time.

By early 2013, it was clear that patients who started out with higher amyloid levels — even those who were cognitively normal — had a much faster rate of decline in cognitive ability, four to five times that of patients with normal levels of the protein, Sperling says.

Those findings pointed to a far earlier beginning of the disease than scientists had grasped and led to the “catch it early” approach of A4. Sperling worries, however, that even the A4 design might be intervening too late, and that, though subjects are cognitively normal, their high amyloid levels mark a cascade ending in dementia a drug won’t halt.

And that isn’t her only worry. Though the amyloid-tau-inflammation scenario has gained wide support, skeptics remain. In fact, there are enough exceptions in the Harvard Aging Brain Study to give Sperling pause: cases of people with high levels of amyloid beta who don’t experience cognitive decline and others with lower levels who nonetheless progress rapidly.

“I think there’s still a lot of questions,” she says. “We can still only account for 50 percent — on a good day — of the variance of what happens to people cognitively. I do worry, what if we’re completely on the wrong track? What if it’s all circumstantial? What if there’s some giant X-factor we’ve missed?”

Dorene Rentz, an associate professor of neurology at HMS and the Brigham and co-director, with Sperling, of the hospital’s Center for Alzheimer Research and Treatment, is also working on the A4 study. For Rentz open questions in Alzheimer’s include the relative roles of amyloid beta and tau. Though removing amyloid beta has been a major thrust of drug development, it could be that tau, which forms the tangles within neurons, has to be removed to see a clinical effect. And no tau-removing compounds have been developed.

“But the argument in the community is we have to start somewhere,” Rentz says. “All we’ve done is fail.”

The inflammation associated with the disease — part of the process of clearing amyloid and tau proteins from the brain, but itself destructive to tissue — amounts to another unanswered question, Sperling says. It’s possible that inflammation has to be reduced or avoided entirely to avoid cognitive damage. Another possibility is that Alzheimer’s is part of an underlying problem, an inability to handle waste proteins and, as Sperling put it, “empty the body’s protein garbage can.” Potentially pointing to a broader problem is the fact that other neurodegenerative diseases, such as amyotrophic lateral sclerosis and Parkinson’s, are also related to abnormal protein accumulation.

Despite these questions, Sperling, Aisen, and Rentz agree that there’s a sense of hope in the Alzheimer’s community, a feeling that progress in several areas has put science on the verge of a breakthrough.

“I am very hopeful about the field in general,” Aisen says. “There’s a number of promising therapies. I believe we’re going to be successful and I believe dramatically successful. This is an enormous world health problem and a major problem in this country’s health.”

“A3 is trying to get closer to primary prevention, pushing the envelope,” Sperling says.

For Sperling and Rentz, Alzheimer’s is not just a clinical problem, but also a personal one. Rentz’s husband has the disease and is currently participating in a drug trial, and Sperling’s career sprang from her grandfather’s Alzheimer’s, which became apparent when she was applying to medical school. Her father, who was a chemistry professor at Lehigh University, was diagnosed with the disease six years ago and died last year.

“I naively thought I could do something before it affected other members of my family,” Sperling says. “I hope my kids don’t have to take care of me that way and, hopefully, my grandchildren won’t even know what Alzheimer’s is.”