A three-year, $1.8 million grant from the National Institutes of Health will enable researchers at the University of Illinois at Chicago to develop portable, easy-to-use sensors that can detect toxic metals in a single drop of blood. The sensors would allow for faster and cheaper research, as well as rapid detection of metals including manganese and lead, both of which are powerful neurotoxins that can affect cognitive development and neuromotor function.

“Being able to quickly detect metals like lead and manganese would mean that remediation efforts to remove the metals from the environment can begin faster and treatment of the individual can also start faster,” said Ian Papautsky, the Richard and Loan Hill Professor of Bioengineering in the UIC College of Engineering and a principal investigator on the grant. “The sensors could also be used to test for these metals in water.”

Currently, small point-of-care sensors exist to detect lead in blood and water, but no such sensor exists to detect manganese. Manganese is an essential element needed by the body for basic cellular functions, but at higher levels, it is a potent neurotoxin that can accumulate in the brain and cause impairment. Current methods to detect this metal are expensive and time-consuming, involving either processing toenail clippings or hair, or taking blood draws in excess of 5 milliliters. Lead is another powerful neurotoxin that can cause lifelong deficits in IQ and academic achievement. Both metals are often discharged to the environment by industrial activities or manufacturing plants, while manganese is also a naturally occurring trace metal commonly found in the environment. 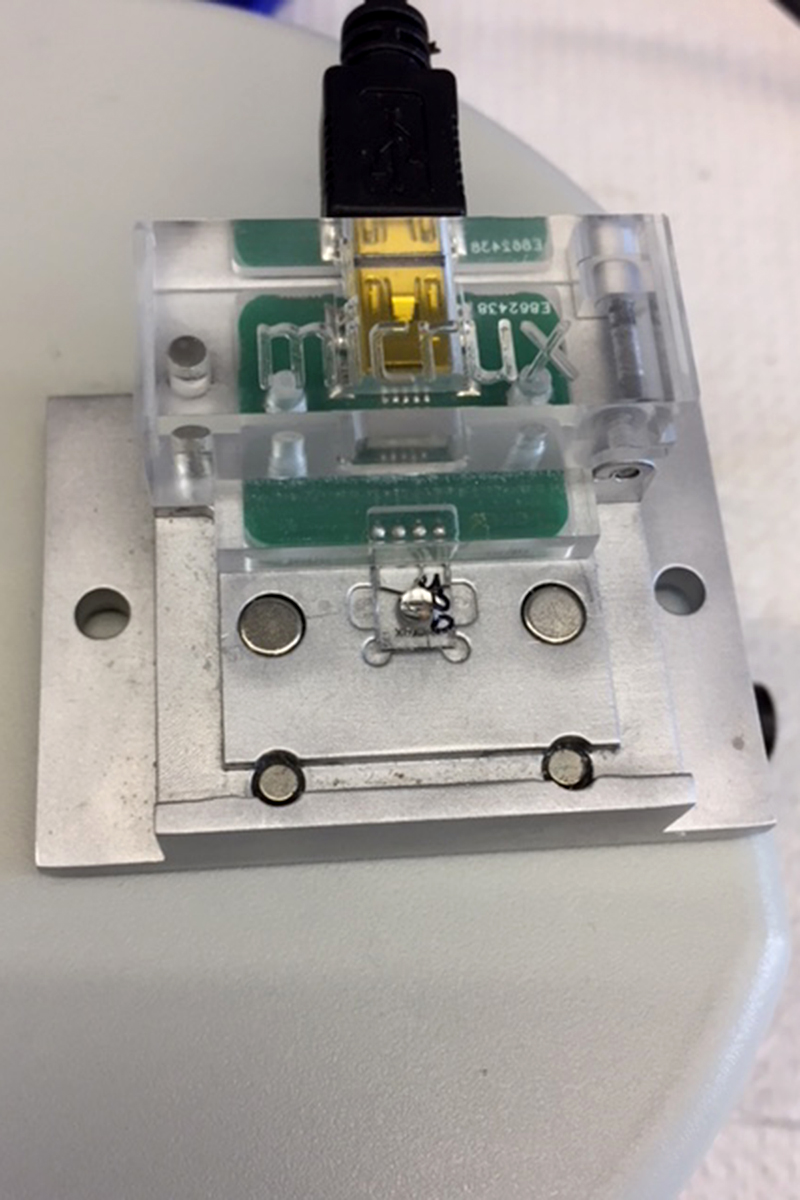 A closeup of the experimental sensor. (Photo: Sharon Parmet)

“Because these metals are most harmful to developing children, another issue, especially if you want to monitor exposure over time, is taking these relatively large  —for a kid — amounts of blood over and over again to track manganese levels,” said Papautsky. “Getting a single drop of blood from a child is a lot easier.”

For researchers studying manganese in populations, they may only collect a few samples a day and wait until they have enough material to send to the lab for processing.

“This means research is often slow, with results coming in months after samples are collected. Our sensors could help speed research so that scientists can get answers faster,” Papautsky said.

Papautsky and his colleagues will work to develop and integrate several parts needed for the sensors: the chip on which a drop of blood or water is placed, the equipment that sends current through the chip to separate out the metal, the software to process the results, and the user interface that displays the results.

“We want the sensor to be easy for anyone to use, and the results easy to interpret,” Papautsky said.

Next, the team will validate their sensor by comparing results of blood tests from 150 children recruited from Chicago neighborhoods known to be affected by environmental manganese with results obtained from matching blood samples sent to a traditional lab for processing.

They will also investigate whether free manganese — manganese ions that aren’t bound to proteins — can provide useful information on total blood levels of manganese.

“Free manganese is much easier to measure than total manganese levels with our sensors, so if free manganese readings turn out to be accurate indicators of the total levels, we will further optimize the sensors to focus on free manganese,” Papautsky said.

Ultimately, Papautsky thinks his sensors will cost around $10 each, not including the hardware and software, which need to be purchased just once.